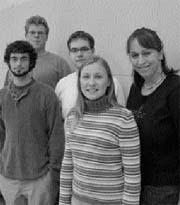 Six Lawrence students who competed in last weekends Wisconsin Chapter National Association of Teachers of Singing (NATS) competition won first place honors. The competition was held here at Lawrence on Nov. 7-8th and involved many of the conservatory’s students both as singers and coordinators. The 425 competing singers came from high schools and collages from around Wisconsin. Students were divided into divisions by experience and music categories and then based on the rating from three judges advanced on to the finals rounds.

Participants were required to sing between 2-4 pieces from differing time periods and depending on the category, some foreign language pieces. 49 Lawrence vocalists completed in the NATS competition. Of those 49 Lawrence students, 18 advanced to the final rounds.

Lawrence regularly sends students to compete in these competitions and students often return with awards. In this case, the six Lawrence singers who received first place honors in their categories won $100.

Allen noted, “The most important part of NATS is that you get adjudicated by those outside your own school. It’s nice to use other people’s performances as a way to evaluate your own.” He also noted that Lawrence students always perform quite well at the NATS competion.

Several Lawrence students also were recognized with second and third place honors. Among these students were sophomore Brad Grimmer and junior Elaine Moran.