“The Secret of Kells” shows capabilities of animation 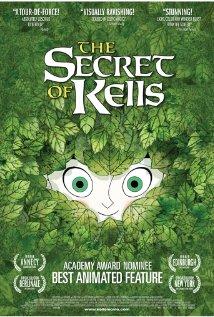 As a film viewer or critic, it often seems easy to overlook animation as a technique or genre due to its potentially superficial appearance and its apparent determination to shy away from the tough issues in favor of a “family friendly” G or PG MPAA rating. However, ignoring or dismissing animation as frivolous or shallow is an enormous mistake.

As a much less physically restricted medium, animation gives the filmmaker a much clearer path towards the fulfillment of their vision. Animation becomes a study of “mise en scene” at its purest as the filmmakers control every single detail of what is shown on screen. New styles and visual motifs like computer based animation, Claymation, and the ever popular anime constantly emerge and make surges into and out of popularity, providing a view into the film viewing audience’s current visual tastes.

Then, sometimes, an animated film moves well beyond the realm of simple entertainment and, despite its seemingly harmless appearance, carries a deep philosophical backbone. Such is the case with Tom Moore and Nora Twomey’s 2009 film, “The Secret of Kells.”

“The Secret of Kells” follows Brendan (Evan McGuire), a young boy who is nephew to the abbot of the Village of Kells, as he discovers the secrets behind the village’s past and eventually works to help assemble the legendary Book of Kells. However, plot alone is not what makes “The Secret of Kells” interesting. The power and philosophical intellect of “The Secret of Kells” can be found in what it suggests about art and the artist’s vision. According to the film, truly great art is not just created, but inspired by vision beyond what one normally possesses; art transcends creation itself.

Fittingly, “The Secret of Kells” is a beautiful movie. The film uses the bright, saturated colors endemic to most western animation, yet uses them in new and interesting ways. The design of every character seems to be consciously and carefully planned not just to look nice, but to reflect the aspects of their personality as well. The harsher or sterner a character is, the more straight lines appear in that character’s design.

The music in “The Secret of Kells” is also remarkable. By  fusing modern film scoring and electronic techniques with tradition Irish melodies, scorer Bruno Coulais creates incredibly unique, detailed, and interesting textures the likes of which I have never heard before. Foley and other sound editing work are also equally competent; not a single moment of “The Secret of Kells” feels unrealistic or even forced. The voice acting fills every moment with insightful realism and just a hint of whimsy.

“The Secret of Kells” is every bit deserving of its 2009 Academy Award nomination for Best Animated Feature, an award that it lost to Disney and Pixar’s “Up.” However, “The Secret of Kells” certainly deserves a place on the podium and in the eyes and ears of any fan of animation or cinema in general.

“The Secret of Kells” is available on Netflix Instant Streaming and Hulu Plus indefinitely.