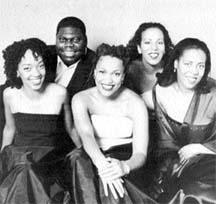 This evening, the award-winning Imani Winds will present at Memorial Chapel. The quintet is a feature of the Artist Series, which presented the Academy of Ancient Music last October. The Imani Winds (Imani is Swahili for “faith”) are a group of musicians of African-American and Latin descent, composed of Valerie Coleman, flute; Toyin Spellman, oboe; Mariam Adam, clarinet; Jeff Scott, French horn; and Monica Ellis, bassoon.

The quintet was created in 1996 with the purpose of presenting both European and African music, thereby expanding the role of the traditional wind quintet. The group tries to expose the music of their shared cultures through their musical selections.

Examples of the Imani Winds’ repertoire include traditional classical pieces by the likes of Haydn, Mozart, and Hindemith. They also include contemporary and African pieces by composers such as Joplin and William Grant Still, and many African spirituals.

The quintet also includes Latin music, jazz (cross your fingers for Desmond’s “Take Five”), and even some Asian and Middle Eastern music. Many of the pieces played by the Imani Winds are composed or arranged by members of the ensemble.

Though the Imani Winds have not been together for long, they have already collected numerous accolades from all over the music world. The ensemble recently won the Artists International Annual New York Debut Prize, in addition to playing with the Chicago Symphony and in Carnegie Hall.

This award best reflects the quintet’s educational mission. The ensemble offers many different residency programs, all designed to present European works and traditional African and Latin music, as well as contemporary pieces.

The Imani Winds have taken up residency with the Chicago Symphony and the Chamber Music Society of Lincoln Center Two, and presented numerous workshops for the Carnegie Hall Neighborhood Concerts program.

These “Neighborhood Concerts” are an excellent way for the Imani Winds to give to the community. They offer workshops for children from seven to 14, and concerts for very young children that present an excellent way to acquaint children with classical and world music in an intimate setting.

Flutist and composer Coleman is active in teaching and solo performances throughout New York. She is currently a teaching artist for the Julliard School of Music Advancement Program and the Chamber Music Society of Lincoln Center.

Spellman, oboist, a resident of Washington, D.C., was principal of the Chicago Civic Orchestra, and has performed with the New York Philharmonic and the Chicago Symphony, among others.

Adam, clarinetist, often plays with the Monterey County Symphony and the Sacramento Symphony, and has won the Hans Wildau Young Musicians Scholar Award.

Hornist Scott has been seen frequently on Broadway, including performances of “The Lion King” and “Show Boat.” He also performs music for the Dance Theater of Harlem.

Ellis, bassoon, is on the faculty of Julliard’s Music Advancement Program. She has toured with the New World Symphony and Absolute Ensemble.

For more information, you can visit the Imani Winds’ website at www.imaniwinds.com