Hane to be Fulbright scholar 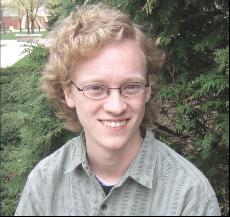 Senior Ben Hane will travel to Germany next year with his Fulbright Scholarship.
Kayla Wilson

Senior Ben Hane will travel to Germany next year with his Fulbright Scholarship. (Caitlin Liddle)

Lawrence University recently announced that senior Ben Hane was named a 2006-2007 Fulbright scholar. With the fellowship, Hane will spend the next school year in Germany teaching English at the high school level. He recently found out that he will be living and working in Lower Saxony, in the northwest part of the country. The fellowship will pay for his living expenses and perhaps a little more, as well as cover his transportation to and from Germany.
The selection process for the Fulbright scholarship, which was created by Congress in 1946, began in October. Applicants were required to outline their teaching philosophy and qualifications. These applications were then sent to a board appointed by a congressional committee.
Upon making it to the second cut in February, candidates then filled out a second application in German, changing their essays or preparing new ones. The second applications were sent on to the German committee, also connected with the government.
Hane said he felt pretty confident in his application, but it was still a relief to hear a positive response. “I was pretty excited,” he said. “‘I have a future now’ was my thought.”
Hane said he feels that this opportunity will be a great challenge, and will also increase his confidence with the German language as well as in his ability to adapt to new situations. The trip will also afford him new cultural insight.
While Hane has been in Germany before, spending the 2004 fall term there as well as this past spring break, this time will be different. On next year’s trip he will be living in a different part of the country and will not be able to hide behind other Americans who may be better speakers.
Working will also provide a new set of challenges for Hane. He will be spending around 12 hours each week in the classroom teaching English, in addition to outside activities such as showing movies, running conversation circles and tutoring.
While he has some experience teaching English after having worked with exchange students here at Lawrence, Hane is a little worried about his abilities, saying, “I guess I’m concerned about being able to explain my own language in a way they will understand.”
Other concerns include living alone for the first time and having excess free time. “Outside of picking up the habit of being an alcoholic, I don’t know what I’ll do,” he joked, adding that he is hoping to join a service group or a community choir.
Hane also said that it may be challenging to meet new people or make friends and it may be difficult to not have someone to talk to when he is upset or lonely. He does however, have some friends in the area where he will be living.
Hane says he really enjoys working with people who are learning about the English language and culture. When asked about his teaching goals, he said, “I’m hoping to give them a little bit of a taste of what the U.S. is and show them we’re not as bad as they think.”
A German and history major, Hane began learning German in high school because he liked the look and sound of the language. He continued with the language, and also found an interest in the cultural and linguistic aspects. After he returns from Germany, he is hoping to teach German, history, or English as a second language at either the middle school or high school level. 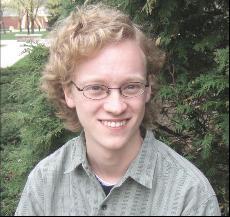 Senior Ben Hane will travel to Germany next year with his Fulbright Scholarship. (Caitlin Liddle)