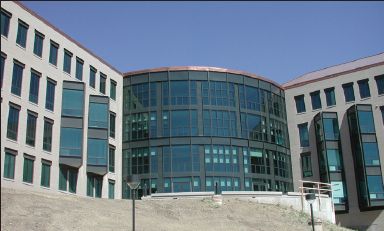 Hiett Hall’s third and fourth floors will be gender-neutral for the 2006-07 academic year. (lawrence.edu)

As of this year’s housing lottery, two floors of Sage Hall will be coed by room and two floors of Hiett Hall will be considered “gender-neutral” housing.
The official change was finalized Feb. 21 of this year, though the coed plan was first brought up last spring to LUCC’s Residence Life Committee.
Former LUCC president Pete Snyder credits the original idea to members of a gender studies class who were pushing for a floor of gender-neutral housing, but the idea lost momentum.
Gaby Szteinberg, the current chair of the Residence Life Committee, also says that last year’s committee members, mostly consisting of outgoing seniors, were mainly opposed to the idea.
In the fall, Snyder renewed the idea with renewed interest and this time the proposition fell on more welcome ears. After considering possible options and speaking with numerous students on campus, Snyder gave a speech earlier this year on his reasoning behind wanting to create a gender-neutral housing option at Lawrence.
“After conversations with a number of students, I thought that mandatory divisions between men and women on campus were unnecessary for college students,” Snyder said.
He also said he considers Lawrence students “intelligent and responsible enough to decide for ourselves if we wanted to live a person of the opposite gender.”
Szteinberg said that she and the committee heard Snyder’s proposal open-mindedly and many members were enthusiastic. Some considerations about the idea were debated, such whether or not freshman should be allowed the option and how to address parents who found the idea immoral.
Despite worry over student concerns, the committee conducted a Voyager survey and the results were positive – a 9-1 ratio of those in favor. There were a few negative responses, however, which is why Szteinberg said the committee decided to only convert a few floors on campus in select buildings.
Sean Herman, another member of the Residence Life Committee, contacted members of Lawrence’s Gay, Lesbian, Other or Whatever organization, who helped him research the existing policies of gender-neutral housing at other colleges such as Macalester, Oberlin, Beloit and Hamline.
Hamline University was experimenting this year with a themed gender-neutral floor. Students had to interview in order to be allowed to live there. Herman said that LUCC talked about interviewing students to allow them to live on gender-neutral floors and also debated whether to limit the floors to gay, lesbian, bisexual or transgender students, but both ideas were rejected.
The idea behind coed housing, specifically gender-neutral housing, is to make the gender choice less of an issue for transgender students and to enable heterosexual couples or friends to live together, as same-sex couples and friends now can.
Szteinberg said that in choosing which dorms to convert, privacy and student comfort were at the top of LUCC’s list.
Sage Hall was originally a coed dorm, so both the second and third floors – currently all female – have two bathrooms. The change thus made logistic sense.
Hiett was chosen because of the private bathrooms, allowing for maximum privacy. This is sensitive to those students who may live on a gender-neutral or coed floor but do not feel comfortable sharing a bathroom.
Szteinberg said she is unsure what will happen in the housing lottery this year, saying she really doesn’t know if the idea will fly. She is unsure who will make the choice to break out of the sex-separated standard but she is interested to find out.
Since Hiett Hall opened in 2003, there has been a split-gender quad option available in that hall, where one room would be female and one male. According to Szteinberg, people generally don’t choose this option, which is why she is eagerly awaiting this first trial of coed and gender-neutral housing.
The Residence Life Committee plans to treat quads as two double rooms to make sure students waiting for a room in Hiett get in. Snyder, too, is unsure of what will happen with housing. He said that the option of gender-neutral housing has not been widely publicized compared to coed housing, and is not currently part of the official housing information available to students.
At least one Lawrentian has expressed dismay at the gender-neutral option, but not because he is appalled that Lawrence would support such a thing. Rather, he would like to take advantage of it but can’t. He will be a sophomore and will not have a high enough lottery number to get a room in Hiett to share with a member of the opposite sex.
Lawrentians surveyed seemed accepting and even enthusiastic about the idea of cohabiting. One sophomore said that she would love to live with her male friends because she often gets along with them better than her female friends.
Another Lawrentian said she too wouldn’t mind it at all. “I would totally live with guys, especially as most of my friends are guys.”
Szteinberg said she would not choose the gender-neutral option. She expressed concern that couples living together may regret the decision if they break up partway through the school year.
On the other hand, Szteinberg said, there are same-gender couples that currently live together unofficially, so it will be a matter of waiting and seeing.
As for the future of coed and gender-neutral housing on campus, Szteinberg said, “We’ll have to wait to see what happens.” It is possible that the committee will continue to consider expanding the housing options to other dorms, for example, to allow underclassmen to take advantage of the opportunity. For now, Szteinberg said, they are taking “baby steps. 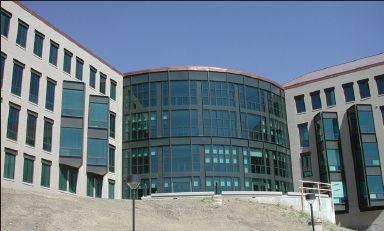 Hiett Hall’s third and fourth floors will be gender-neutral for the 2006-07 academic year. (lawrence.edu)