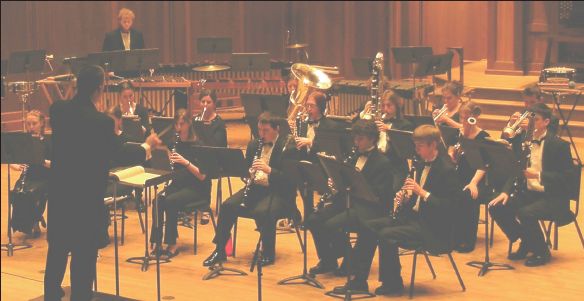 The band tuned and the conductor entered the stage with the usual ceremony, but Saturday’s Wind Ensemble concert was anything but a usual concert. Filled with the sounds of the contemporary and the modern, the chapel rang with percussion peculiarities, whistling woodwinds and bright brass.
A short concert with only four selections, the show began with Joseph Schwantner’s “. and the mountains rising nowhere,” composed in 1977.
“The sheer quantity and involvement of the percussion, in conjunction with the piano, actually provides the bulk of all material for the piece,” director Andrew Mast commented.
Indeed, the first thing to reach the audience’s ears in this piece is the booming of drums followed by the quiet whistling made by caressing the rims of tuned wine glasses.
Mast revealed that both the opening Schwantner piece, as well as the closing work, Vincent Persichetti’s Symphony No. 6, are two of his favorite works for band. Both extensively involve the percussion section as what Mast calls a “melodic component” within the work.
The pieces that straddled either side of the intermission featured Kim Reece on alto saxophone and Nikoma Baccus on flute, both winners of the 2005-06 Wind Ensemble Concerto Competition.
Baccus’s piece, “Poem” by Charles Griffes, was originally written for flute and orchestra. Baccus found the arrangement for band while working in the library, and since she had played the original piece last year for a jury, she said she decided to polish it up and memorize it for the competition.
“‘Poem’ is unique because it is only one movement and isn’t broken into sections,” Baccus said. “Its emotional and character contrasts are free-flowing and move in and out of each other, just as one would think a great poem does.”
She added that she worked hard with two different flute instructors – Suzanne Jordheim and Prof. Ernestine Whitman – to effectively convey the variety of character in the work.
Reece also showed great artistry in her piece, “Concert Suite for Solo E-flat Alto Saxophone and Band,” composed in 1998 by William Bolcom. With its lilting lines and frequently unconventional sounds, the work was a joy to hear.
Mast was impressed with Saturday’s performance, and looks forward to the next. “I was honored by the way that each and every student rose to the occasion of very challenging repertoire. More of the same will be coming for the May 12 Stravinsky concert! 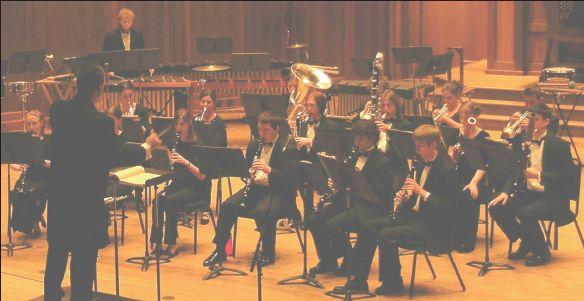