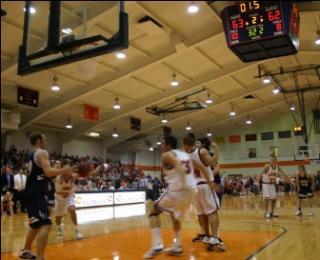 Two years ago, Keven Bradley watched from the bench as his UW-Stevens Point Pointers put in a layup with eight seconds left to deny the Vikings a spot in the final four on Point’s way to their first of two National titles. This year, the senior transfer from Omro had a decidedly better view, putting in a layup as the buzzer sounded to give No. 2 Lawrence the win over No. 14 Carroll, 64-63. The shot both capped off the season’s most spectacular win and clinched LU’s third-straight MWC regular season title.The Pioneers had previously opened eyes by moving from 22nd to 14th in the d3hoops.com poll in one week’s time. They looked solid the entire game, using 50 percent shooting in the first half and a swarming defense to stake themselves a 38-34 lead at halftime. LU all-American Chris Braier was only 2-9 from the floor at the break, but the Vikings kept it close with solid shooting from the remainder of the team.

The Van Male Fieldhouse had reached its capacity with the last of the estimated 1,800 fans trickling in by halftime. With these extra bodies, the second half was decidedly louder than the first. Carroll continued their sizzling play into the second half, building a 9-point lead with 14:09 to go. Lawrence hung around though, and was able to chip away at the lead thanks to the reemergence of Braier, who got 12 of his 16 points in the second half. An Andy Hurley layup with 6:52 pulled LU even at 52-52 to set the stage for an ending that will be remembered by all who were present or listening.

LU pulled ahead by 2 several times in the final five minutes only to see a determined Carroll squad even the score each time, eventually taking the lead on a Jason Scheper 3-pointer with 1:11 to go in the contest. On the ensuing possession Braier was fouled and missed his first free throw but made his second, giving Carroll a 1-point lead with 52 seconds left in the contest.

The Pioneers then used the entire shot clock to set up James Johnson’s missed jumper, giving LU the ball back with 19 seconds to go. After a timeout, Keven Bradley inbounded the ball underneath the basket with 3.4 seconds to go, barely getting the ball to Kyle MacGillis, who managed to return the ball to Bradley for the dramatic winning layup.

With the win, the Vikings clinch the MWC regular season title and home court advantage in the conference tournament, as well as putting Lawrence on the brink of its first-ever perfect season. LU finishes out the regular season on Saturday afternoon

as St. Norbert visits Alexander Gymnasium for a 2:00 p.m. tip-off. As if an undefeated season wasn’t motivation enough, the Vikings will be looking for revenge against the Green Knights, the last team to beat Lawrence in Appleton.

Peter Griffith Kevin Bradley received the ball under the hoop to put away the winning basket Two years ago, Keven Bradley watched from the bench as his UW-Stevens Point Pointers put in a layup with eight seconds left to deny the Vikings a spot in the final four on Point’s way to their first of…