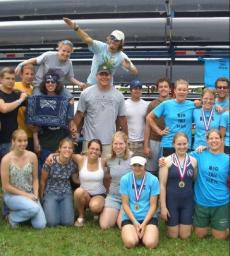 While Lawrence University sports such as baseball, softball, tennis, track and golf have all come to an end, one team on campus remains in season – the LU club crew team.
The men’s and women’s crew teams have had much success this season, pleasing both coaches.
Crew is not a sport that one can assume everyone is familiar with. While many students, if not all, have at some time watched or even attended a baseball, softball, football or basketball game, the same can not be said for a regatta, a crew race. Perhaps the word “regatta” even sounds as foreign to you as it did to me the first time I heard it.
The crew team here at Lawrence is a club team, meaning they do not have coaches that are paid by the university nor do they receive the same amount of funding.
However, the crew team does represent Lawrence even though they are a club team, and women’s head coach Kat Kaegy is very grateful for the financial support from LUCC. “We would not be able to do anything if it were not for LUCC”.
Kaegy and men’s head coach Brian Schnettler were both members of the crew team here at Lawrence and credit their enjoyment of being part of LU crew as the reason why they chose to remain a part of the team through coaching.
The crew team does most of their recruiting through Lawrence’s welcome week Activities Fair. Numerous Lawrence students are interested in being members of the team at first, but many realize the intensity and dedication crew requires is too much of a commitment.
The crew season starts in the fall and although there are no regattas in the winter, the rowers must stay in shape for the spring season. “In the first week, there are a lot of people interested. The fall season separates those who want to row from those who don’t want to,” said Schnettler.
The wide range of experience among the crew team is one that both coaches try to cater to in helping everyone enjoy the sport. Many students join the team having never been part of a crew team before, while others have participated in many regattas before Lawrence.
The different levels of experience are something that is commonplace in crew and those who have little experience participate in “novice” races against other schools that have rowers with minimal practice in the sport.
The more experienced rowers participate in varsity races against other varsity competitors from schools across the country. Crew, although it may not evoke the same familiarity as other sports do, is extremely popular throughout the country.
The crew team recently went to a regatta held in Philadelphia where an astounding 115 schools and 3,877 athletes participated.
There are many different types of races in a regatta. There are one, two, four or eight people in a boat during a race. Lawrence crew takes part in either four-person or eight-person races.
In addition to the amount of rowers in the boat, there is another classification that distinguishes types of races. Both the men and women race in either a lightweight or heavyweight event. The amount of weight, as well as other factors, can have a large impact on a race.
Women’s head coach Kaegy emphasizes the importance of attention to detail, as one minute detail can have a large impact on the result of the race.
“During that race, you’re pulling as hard as you can and everything you do affects the boat.” All rowers must be in sync and on the same page in order to be successful, making crew the essence of a team sport. One person cannot make up for the weakness of others, while the strength of everyone cannot mask the weakness of one. 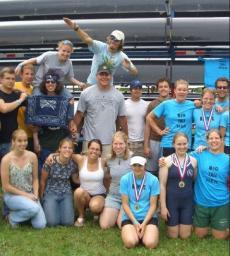 Ben Rosenblatt Lawrence crew members sport medals and smiles at a regatta this spring. (Ryan Day) While Lawrence University sports such as baseball, softball, tennis, track and golf have all come to an end, one team on campus remains in season – the LU club crew team.The men’s and women’s crew teams have had much…