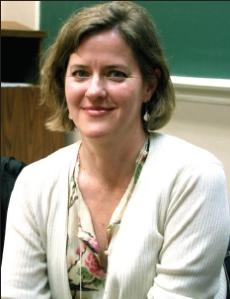 This past Tuesday, Elizabeth Robinson, a visiting experimental poet whose work has appeared in the Colorado Review, the Denver Quarterly, and New American Writing, gave a poetry reading at Wriston auditorium.
Robinson is the third visiting writer of this term. The Mia Paul Poetry Fund sponsored all three writers.
Assistant Professor of English Faith Barrett, a close friend of Robinson’s, was responsible for bringing her to campus.
Robinson read mostly narrative pieces to contrast with the indirect style in her poetry collection, “Apostrophe,” which Barrett incorporated into the curriculum of her two spring term classes, American Poetry and Creative Writing.
“When you hear a contemporary living writer reading from their own text, it gives a sense of writerly voice and connection between speaking voice and textual voice,” Barrett said.
“Nine times out of 10 it gives a better understanding of what the work is about,” she added, describing how the reading was especially useful for those new to poetic analysis.
An hour-long book signing and reception followed the reading. During this time, students and the public were given the opportunity to have their copies of “Apostrophe” and “Apprehend,” Robinson’s most acknowledged poetry collections, signed by the author herself.
The title “Apostrophe,” Barrett explained, is “a literary term in which the speaker refers to a person or thing that is absent or dead.” The poems themselves examine how to address others close to us and how to address other poets.
“Apprehend” was written in the same time period, but is more child-based and influenced by her son’s experiences.
Poets Robert Creeley and Lorine Niedecker, both of whom Robinson said were “learners, knowers, and inquirers,” have inspired Robinson.
Her poetry balances between “spiritual, narrative, and confessional” – indications of the influence of the two Objectivist poets.
Robinson now has eight published collections of poetry. “I found my success through a lot of luck and hard work,” said Robinson.
As winner of several awards, including the National Poetry Series Award and the Gertrude Stein Award for Innovative American Poetry, Robinson was right. Luck has been on her side – and Lawrence was lucky enough to hear the results. 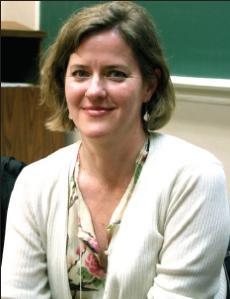 Rusinak, Kirsten Robinson spoke to Lawrence students Tuesday. (Blair Allen) This past Tuesday, Elizabeth Robinson, a visiting experimental poet whose work has appeared in the Colorado Review, the Denver Quarterly, and New American Writing, gave a poetry reading at Wriston auditorium.Robinson is the third visiting writer of this term. The Mia Paul Poetry Fund sponsored…