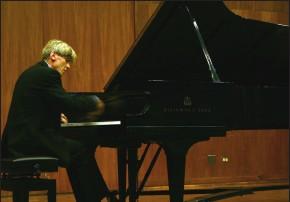 The Lawrence community recently experienced a true musical treat Feb. 2 when internationally acclaimed pianist
Paul Roberts performed works by Claude Debussy in Harper Hall. That Thursday evening, Conservatory students and faculty gathered to hear Roberts perform the works that he has intensively studied and perfected over the course of an entire career.
Roberts played both books of Debussy’s Prludes for solo piano. Listeners were held captive by his flawless
technique, intense dynamic contrasts
and incredible musicality. Not a single note went through Roberts’ fingers without having been treated with thought and care. In addition, the performance was enhanced by Roberts’ detailed explanation of each movement within the piece. He gave historical background and informed the audience of specific passages to listen for. For example, both the French and British national anthems can be heard in movements from the second book. Roberts summed up Debussy’s Prludes in three words: mists, fairies
and fireworks. He explained how almost every movement contains aspects of these terms, whether in the title or simply in the musical effects used by Debussy.
It was clear from these detailed and informative explanations that Roberts has dedicated his life to the study of Debussy’s compositions. He is currently recording Debussy’s complete
piano works, and the first CD in the series was declared by Classic CD magazine as “probably the most desirable
modern recording of the Prludes currently available in the U.K.” Roberts also has a parallel career as a writer, and has published the acclaimed book “Images: The Piano Music of Claude Debussy.” He is currently working on another volume entitled “Reflections: The Piano Music of Maurice Ravel.” Roberts also recently received a commission to write a biography of Debussy to be published later this year.
Roberts’ fascination with French music, particularly that of Debussy, began when he was very young. “I thought it was the most amazing music I had ever heard,” he said. “At the age of 15, I decided that I would do two things: play only Debussy, and write a book about him. Of course, it didn’t actually happen until 30 years later, but nevertheless .”
Lawrence University has a very special connection to Roberts. Conservatory piano students who wish to study at the London Centre often have the opportunity to take lessons
from him, since he calls London his home. Students who choose to take advantage of this opportunity will learn from an artist who has been hailed by critics as “a truly creative performer” and “comparable to the very greatest.” Lawrence is truly fortunate to know Roberts, an incredibly knowledgeable and innovative performer who is able to convey to his audience the genius of Debussy’s music.