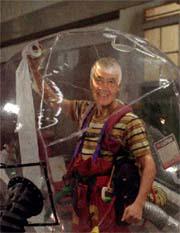 What will the Warch legacy be? Well, total isolation might be one possibility. The new Person Halo seeks to redefine the liberal arts experience for a time that realizes it is unsafe for people to deal with people, or be around other persons at the same time in the same place. Your business is to learn.
Rik Warch
allergic to fun

What will the Warch legacy be? Well, total isolation might be one possibility. The new Person Halo seeks to redefine the liberal arts experience for a time that realizes it is unsafe for people to deal with people, or be around other persons at the same time in the same place. Your business is to learn.

President Warch announced a Person Halo to be instituted at the start of the 2004-2005 academic year, in light of an institution-wide examination of illness and assaults. Warch announced the halo from the back of the chapel stage, leaning up against an organ, at a special university-wide convocation that was webcast into each room. Only 200 dignitaries were allowed to attend the Memorial Chapel event, due to health considerations, and each was forced to sit at least thirty feet from the nearest neighbor.

“Sexual assaults, communicable illness, and low self-esteem very rarely occur unless peers are in close proximity with one another,” Warch explained, taking a gasp of oxygen from a pipe in the organ between lines of speech. “Therefore, for legal reasons the administrative team felt it prudent to ensure that no student, staff, faculty member, or trustee is within thirty feet of another such person without express-written, prior consent.”

Studio teachers, conservatory ensembles, and significant others are among those potentially stymied by the effective restraining order.

The decision sent waves of disparate cheers through the many junior faculty members watching from their home pc’s. “Now we can finally have class in a chatroom, without even changing clothes! It’ll be fun!” announced an anonymous English professor in the “John D. Strange Web Commons Forum,” one of the forums computer services created to minimize the person-to-person element of campus life.

“The dogmas of the quiet past are inadequate for the problems of the waning present, or something,” Gerald Podair, chair of an ad-hoc “problems in peer interaction” committee said, arguing that Carol Saunders RN’s plan for hand-washing stopped too short.

Warch’s decision was seen by some as an attempt to wring out the remainder of his political capital. “Once we found LUCC was a paper tiger, we figured what the hell? The smoking halo doesn’t go far enough,” Dean of Students Nancy Truesdell said.

Housing will be greatly affected, with some challenges posed and new solutions offered. All residence halls will be demolished and replaced by sealed hovels, all twenty feet away from each other, and 5 x 5 each. Residents of each hovel may choose to make the hovel smoke free. “See? Options, just like you’ve always wanted,” said Warch.

First to be demolished is Hiett Hall, full of quads, and-due to its state of the heart heating-impossible to convert into insular living.

“The task-force on residence life was sure that students wanted quad living and the roommate experience. We forgot, though, that most sexual assaults, diseases, and annoyances-that we can be sued for-happen in close proximity. So singles it is,” said Amy Uecke.

LUCC, for its part, has been asked to administer the new program and select a committee for it. President Joel Rogers was excited by the upcoming prospect. “We know one thing for certain: smoking causes cancer. And we know another thing. There is this ideal, this calling to which we have been called and now, to which it, again, we must again call in order for fruition to fru-it.”

Boldt representatives were excited: in order to allow adequate space for the halos, the campus center will now need to be large enough to give each student their space. “We are excited to be clearing out 42,000 feet of surface area to build the best facility for Lawrence,” announced O.C. Boldt.

Because the Campus Center will now occupy more than two square miles, the trustees have decided to break agreements with the Fox River, several downtown businesses, many downtown churches, and the promise not to build on Main Hall Green