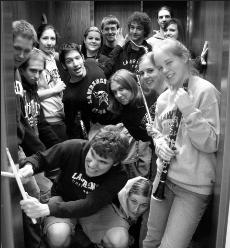 The fun-loving pep band crowds into the library elevator. Expect the same upbeat energy at the concert. (Brent Schwert)

The Lawrence University Pep Band will strut their stuff in Riverview Lounge at the second annual pep band concert Fri., April 27 at 8 p.m.
Throughout the years, Lawrence students have craved an organized pep band, but it wasn’t until last year that the Lawrence University Pep Band developed itself.
In a chance lunch meeting with President Jill Beck, the founder of LUPB, Rob Strelow, professed his interest in forming a group dedicated to performing music that invigorates the mind and soul: a pep band.
Beck helped the now-graduated Strelow find the necessary funds to purchase LUPB’s first drum set. With the ball set in motion, Strelow did what all great Lawrence groups have done: He requested and received LUCC funding, and he set up a booth at the activities fair.
LUPB had a slow start. While making it through the first football season, the classic rocking came to a screeching halt in the middle of the year due to lack of dedication. In its first year, the group went through more drummers than Spinal Tap.
“It’s all volunteer. There’s no way to threaten people!” joked sophomore Bryce Schuler, the man currently in charge of LUPB.
After reorganizing practice times and establishing a system of semiaccountability, LUPB played through last year’s epic basketball season with vigor.
Changing gears, the group decided to perform on stage in a concert for the Lawrence community. The concert featured the classic repertoire of pep band music – “Land of 1000 Dances,” songs from “Rocky,” and “Jump, Jive and Wail,” but also included “Rock ‘n’ Me,” by the Steve Miller Band, which was specially arranged by the band for the concert.
The concert was a hit. It was not only a pleasure for the audience, but also a tremendous learning experience for LUPB members.
Now, one year later, the band is preparing, once again, to rock Riverview. Since Strelow graduated, Schuler has taken the reins. “We’re precise this year,” said Schuler.
Current LUPB group participation varies greatly, but there are usually 15 or 20 band members at a given event. Eventually, LUPB hopes to have Lawrence faculty play at the concert or even at pep events.
With members from all academic areas at Lawrence, there are constantly new arrivals and departures within the group, but they all have a similar creed.
Members enjoy the musical outlet LUPB provides, having the opportunity to attend athletic events, but most of all, the wild entertainment associated with LUPB.
Considerable amounts of this wild entertainment will be found at the LUPB concert in Riverview Lounge Friday. With the theme “A Brief History of Rock,” the concert will showcase early rock pieces from the ’60s such as “Born to be Wild,” and “Smoke on the Water.” It will also feature modern rock songs such as “Smells Like Teen Spirit,” and “Come Sail Away.”
And bring your dancing shoes: In an effort to encourage audience participation on the dance floor, LUPB has invited the LU swing dancers. 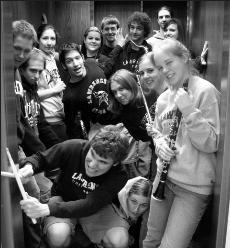 The fun-loving pep band crowds into the library elevator. Expect the same upbeat energy at the concert.

Zachary Keilholz The fun-loving pep band crowds into the library elevator. Expect the same upbeat energy at the concert. (Brent Schwert) The Lawrence University Pep Band will strut their stuff in Riverview Lounge at the second annual pep band concert Fri., April 27 at 8 p.m.Throughout the years, Lawrence students have craved an organized pep…