Levy passes the baton after 25 years 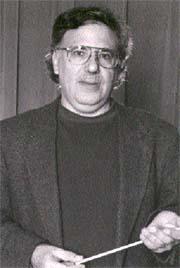 Warch isnÂ´t the only one retiring from Lawrence after 25 years. Robert Levy has led Lawrence bands for two and a half decades.
Reid Stratton

Warch isnÂ´t the only one retiring from Lawrence after 25 years. Robert Levy has led Lawrence bands for two and a half decades.

This weekend Prof. Bob Levy will conduct his last concert with the Lawrence Wind Ensemble. This will mark over 130 concerts in his 25 years as director of bands at Lawrence.When Levy arrived in 1979 he was hired as band director and professor of trumpet. At that time, there were about 145 music majors in the conservatory, and only one wind ensemble. Before long, the need for another band arose, so the symphonic band was formed, adding to Levy’s duties. Just last year, Prof. John Daniel was hired to teach trumpet, allowing Levy to focus on the band program even further. Though Levy loved his time as trumpet professor, it is wind band conducting he is most passionate about.

“In studio teaching there is a great deal of redundancy. You hear lip slurs and scales all the time. In conducting, you usually don’t repeat a work within five years. It’s always fresh, because the repertoire in front of you is always fresh. I probably didn’t make it easy for myself as a conductor, because there were some years where if I did 35 works, 28 of them were new, and I had to learn them. I could have made the job easier for myself if I had done just one new work every concert.”

Though he may be “retiring,” Levy is far from finished with music. He is well known in the conservatory for his commitment to new music, and wants to ensure that the highest quality literature is being written for wind band.

“The wind ensemble today is caught between a rock and a hard place,” Levy says. “To the general public, band music still means John Philip Sousa. Well now we have Pulitzer Prize-winning composers writing for wind ensemble, but most of that music is really difficult to play. One thing that pleases me is that the CBDNA [College Band Directors National Conference] is trying to get good composers to write good music that is playable by young bands.”

Naturally, leaving Lawrence is a bittersweet experience for Levy. He has seen the conservatory and the wind band program grow by leaps and bounds in his time here. Levy has also gotten to know hundreds of students through his conducting and private teaching.

“I’ll miss the students more than anything,” says Levy. “The music-making process is a sharing one. For me it’s been a two-way street. Hopefully students have learned from me along the way, but I have also felt rejuvenated and charged by their efforts, which I greatly appreciate.”

Of all the things Levy has accomplished during his time here (this includes five recordings and an award from Downbeat), he is most proud of the way his students have been receptive to new music for the wind ensemble. Levy says, “It’s one thing to walk in and play Brahms’ 2nd Symphony, a piece that everyone knows is a great work of art, whereas if you pass out a work by a composer they’ve never heard of you have to trust that it’s a good piece of music.”

And so the end of an era draws to a close as Levy takes his last bow this Saturday. Levy is greatly admired for the years of work he has put into developing the wind band program here and helping to keep the conservatory on the cutting edge of new music. Any band member can tell you, Lawrence will never feel the same without Bob Levy.