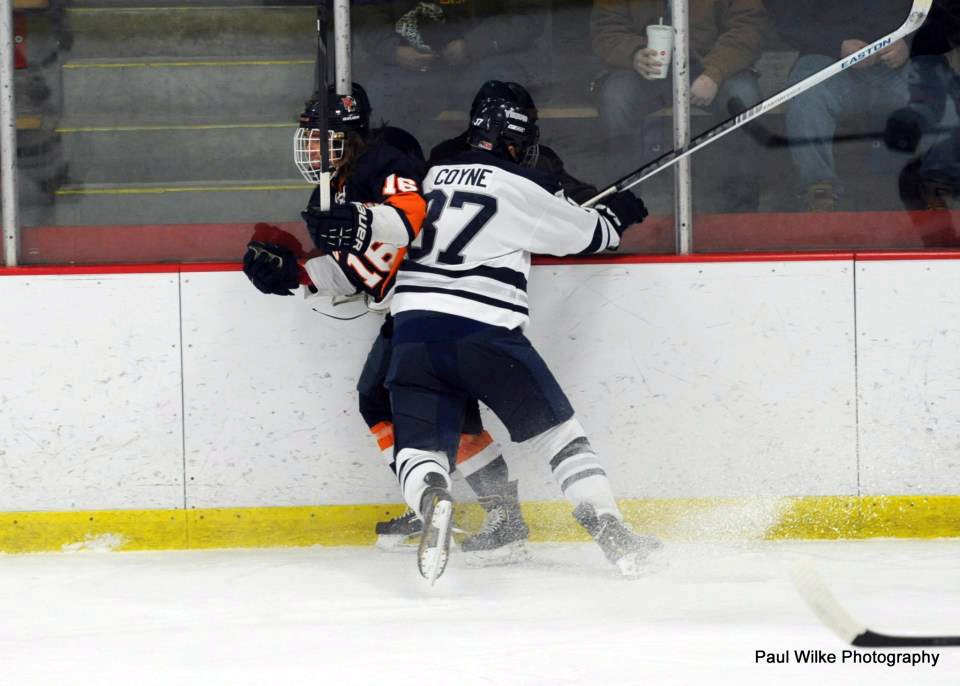 Last weekend the Lawrence University hockey team hosted Northland College (7-11-1, 5-9-0 MCHA) in a two-day series at the Appleton Family Ice Center. The team experienced some ups and downs, emerging with one win and one loss and bringing their record to 6-11-2 and 5-7-2 in conference.

During the first game Friday, Jan. 27, the Vikings kicked the match off on a high note. Freshman Rudi Pino introduced the puck to the Lumberjacks’ goal within the first two minutes of play off an assist by fellow freshman Renato Engler.

The second period yielded even more early success for LU. Freshman Matt Moore, assisted by Pino and Engler, scored just 20 seconds in, and sophomore Patrick Coyne added another at 3:20 off an assist by juniors Paul Zuke and Derek Brickan.

Northland’s only goal of the match, scored by senior Jamieson Webking, slipped by freshman goaltender Fabian Sivnert 15 minutes into the third period. Lawrence freshman Logan Lemirande retaliated immediately after, scoring off an assist by senior Phil Buschbacher and freshman Ryan Rumble at 15:37, bringing the final score of the game to 4-1.

The following afternoon, the Vikings and the Lumberjacks reconvened on the ice for a rematch. LU started strong, scoring two goals in the first period. Pino and Engler again collaborated on the first goal of the game within the first three minutes, and Coyne, assisted by Zuke and Brickan, rounded off the first period with a second at 15:58.

Lawrence’s momentum began to slow during the second period, when the only goal was scored by Northland senior Austin Southerland with four and a half minutes remaining in the period.

The favor shifted to the Lumberjacks during the third period, with frustrating results for the Vikings. Northland junior Louis Labbe sank his team’s second goal just two minutes into the period, and junior Mike Lennon scored the rest of the Jacks’ goals: one at 6:34 off a power play after Pino was called for roughing the goaltender and another a minute and a half later.

LU attempted to catch up, bringing the score to 3-4 with an agile, unassisted goal by Engler around the 15-minute mark. The last few minutes of the match were fast-paced and suspenseful. Northland senior Kraig Wright was whistled for hooking with just three minutes remaining.

Lawrence fought hard to capitalize on the power play, but none of their attempts successfully found the net. The match concluded with a final score of 4-3 and a victory for Northland College.

The Vikings will face Marian University (7-8-1, 6-5-0 MCHA) in the Battle of Highway 41 series this weekend, hosting the Sabres at the Appleton Family Ice Center Friday, Feb. 1, and traveling to Fond du Lac Saturday, Feb. 2.