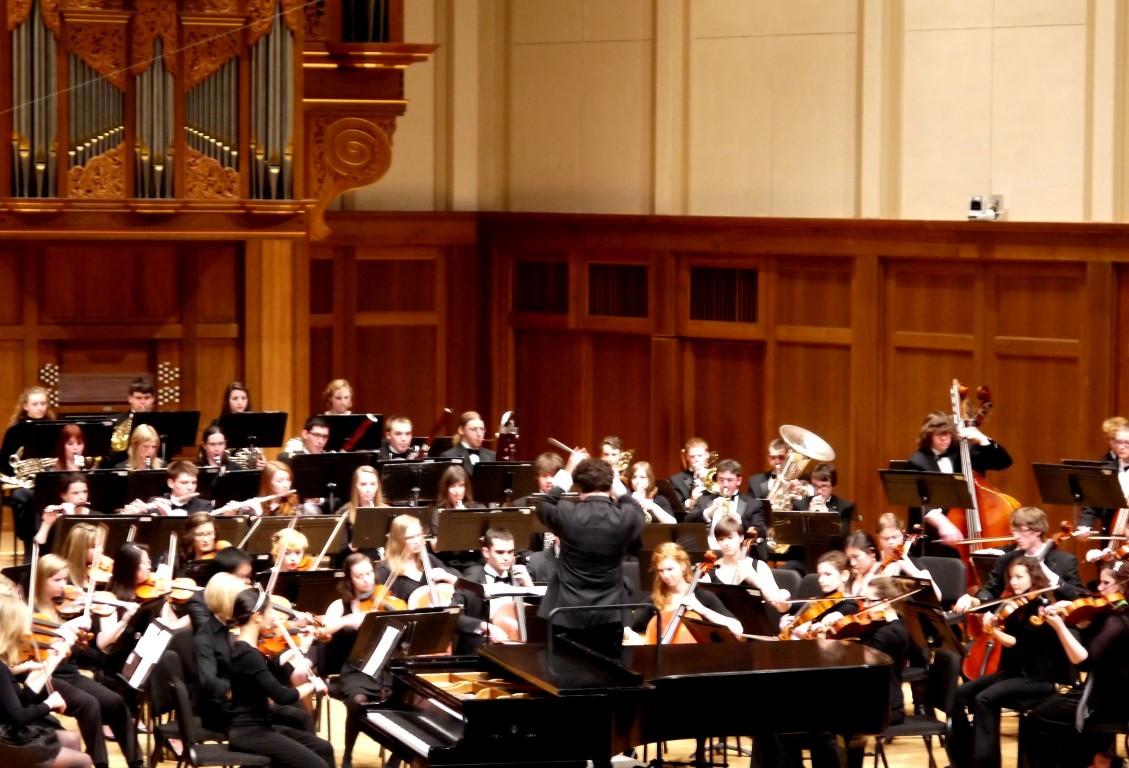 Last Friday, Jan. 25, the Lawrence Symphony Orchestra performed their first show of the term. They proved that they have only grown individually over the six-week break and matured collectively since last term.

The first piece was the debut of a piece by composition student Nolan Veldey ‘13 entitled “All But Inescapable.” It began with a low string drone, and the short but compact piece eerily meandered, built up to and faded away from its dissonant climax.

Accompanied by the orchestra, Professor Michael Mizrahi delivered an impeccable interpretation of Beethoven’s “Piano Concerto No. 5 in E-flat Major,” better known as the “Emperor Concerto.”

Mizrahi’s masterful touch was apparent from the start, ranging from the exuberant ascending major arpeggios, trills and fluid chromatic passages cueing the orchestra, to more sensitive passages where he worked under a soloist from the orchestra in the first movement. The orchestra was incredibly reactive to Mizrahi’s dynamics and volume in the hall. Not once, even in his accompanying passages, was Mizrahi’s finger work covered up.

In the soothing second movement, Mizrahi assumed a lullaby-like and at times playful tone. The string section softly sighed behind him. The woodwinds and flutes entered, soaring above the rest of the texture beautifully.

Pressing on with the overwhelming energy and quick tempo required of the third and final movement, Mizrahi proved his unfathomable stamina and performance experience. Throughout the work, conductor Octavio Más-Arocas mediated between Mizrahi and the orchestra with an intense attentiveness.

Mizrahi’s performance was met by a well-deserved and cacophonous standing ovation from the crowd.

The second half of the concert premiered alumnus Evan Williams’ ‘11 work, “LUX.” It called for four horns, three trombones, two trumpets and a tuba. The dark brass texture filled the room with a warm tone.

The dissonances in the middle voices of the texture were striking, and served as the richest content of the composition. High trills in the trumpets set up a rhythmic quarter-note triplet groove that the trombones laid down, leading to a powerful, robust last chord.

The concert concluded with Sibelius’ “Symphony No. 2 in D Major.” In the first movement, the French horns executed an exposed interlude with precision. The strings followed with a rich melody, the bass section answering in pizzicato. A succession of short phrases were unified and very well-shaped dynamically.

The second movement began with a bass section feature. The plodding pizzicato notes faded into the recesses of the chapel. When asked, enthusiastic bass principal junior Harrison Keeshin added, “The bass section is awesome!” Timpani rumbled under dramatic ascending sweeps in the higher strings, met by violent work in the brass section.

The fourth and final movement of the piece started with a choral-like brass interlude, which gave way to a beautiful, soaring oboe solo. Más-Arocas pulled so much from his players, especially in the strings during the lush flowing romantic passages. The finale was incredibly loud and filled with intensity, and the last three chords left the crowd with neck hairs raised.

Last Friday, Jan. 25, the Lawrence Symphony Orchestra performed their first show of the term. They proved that they have only grown individually over the six-week break and matured collectively since last term. The first piece was the debut of a piece by composition student Nolan Veldey ‘13 entitled “All But Inescapable.” It began with…