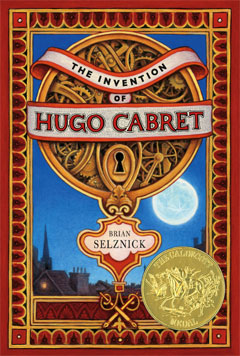 Brian Selznick’s “The Invention of Hugo Cabret” is at once a profoundly old-fashioned and innovative work of fiction. A novel, a comic book, a movie, a picture book—it’s all and none of these. While some may consider a children’s book beneath their notice, I consider this book nothing less than art of the finest quality.

The plot is strikingly original and intelligent and the pictures gorgeously textured and detailed. Hugo is an orphan living in a Parisian train station during the 1930’s. While everyone else goes about their business, he flits around amid the hidden machinery of the station’s clocks, taking as his duty the task of keeping them running.

Hugo’s beloved father, a clockmaker, died in a mysterious accident, leaving Hugo with nothing more than a notebook of drawings and an obsession with an automaton he found in the museum where he died. Animating the robot by figuring out its inner workings becomes Hugo’s purpose in life—at least, until he conflicts with the toymaker in the station and unintentionally befriends an odd girl named Isabelle who begins to pry open his shadowy, secret life.

A missing key, a message from Hugo’s father, Isabelle, the toymaker and the automaton all lead Hugo closer to the incredible truth at the heart of the mystery linking Hugo and Isabelle’s families. The combination of suspense, sumptuous detail, humor and memorable characters makes this book a joy to read.

While reading, I luxuriated in looking at the pictures, the richness of which made me feel as though I were falling into them. Selznick clearly takes a lot of inspiration from the history of cinema in this story’s plot, characters and illustration. The framings, angles and progressions of images have the eye of a cinematographer, giving the feeling of watching a movie instead of merely reading a book.

Even the plot itself evokes the old days of cinema. This is story-telling at its best, which seeks to involve its audience with the characters and tantalize them with mystery instead of bombarding them with sensationalized melodrama. The plot eventually concerns itself with the early days of cinema, becoming a paean to the magic of movies in both content and form.

“The Invention of Hugo Cabret” is, more than anything, a celebration of the power of stories, and especially of stories told through a mixture of words, people and images. The bookish Isabelle introduces Hugo to books, and they discover together the wonder of letting a darkened theater take you away from the world and into the limitless possibilities of imagination.

For anyone who has ever lost themselves in a book or slowly drifted back into their skins as the lights come on in the movie theater, this book is for you, whether you’re a child or not. While reading this story, you remember what it was like to be a child and discover for the first time the enchanting reality that waits between the covers of a book and behind the curtains of a movie screen.