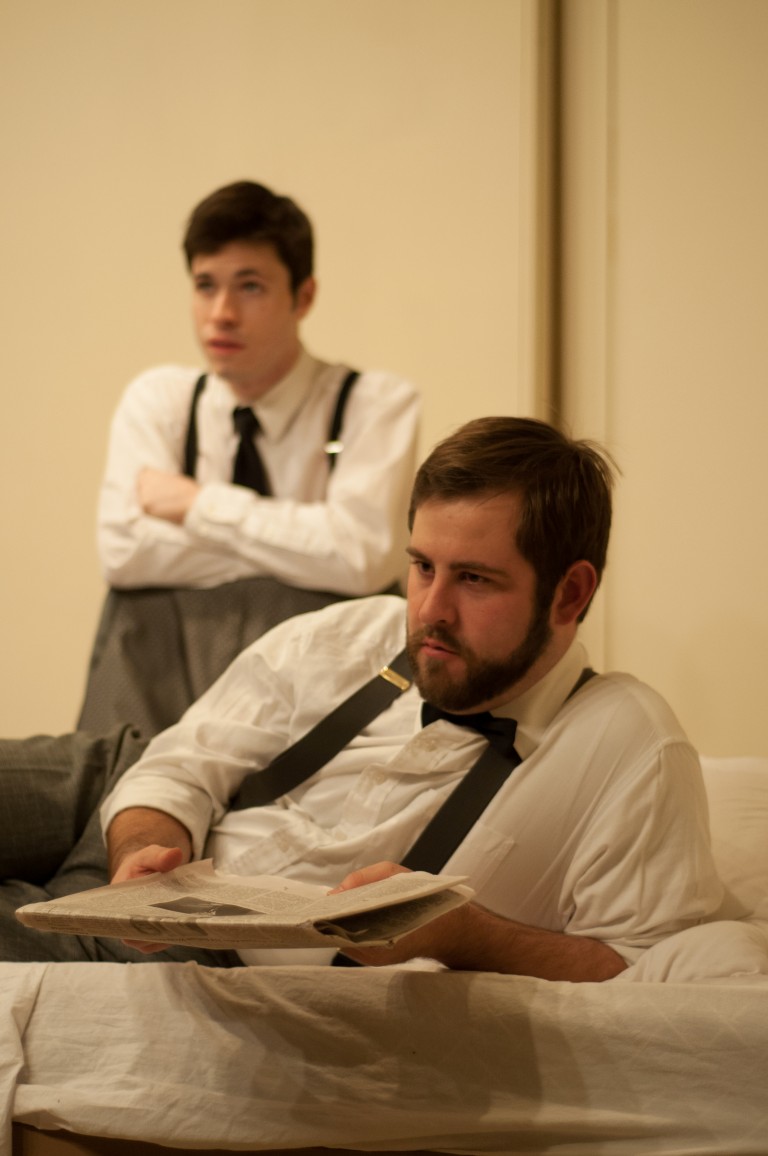 On the weekend of the 25th in the Underground Theater, Lawrence students Matt Cawley and Steven Stein thrice performed Harold Pinter’s one-act play “The Dumb Waiter” for their senior project.

“After considering many possibilities, I settled on Harold Pinter because of his unique style,” explained Cawley. “Pinter is characterized by long pauses, awkward moments and an interesting blend of absurdism and realism.”

“Pinter is a master of surreal scenarios,” said Stein. “I think that this play presents a neat contrast between rational and illogical elements of life and maintains a sense of humor throughout it all.”

“The Dumb Waiter” was written in 1959. It is one of Pinter’s “comedies of menace,” a categorization of his earlier works, which in general deal with the inexplicable futility and absurdity of human interactions. They also often deal with an omniscient figure that dominates the characters on stage.

“Waiter” in particular concerns two hit men, Ben (Cawley) and Gus (Stein), who wait in a basement for their next assignment. This basement used to be a café, and for some reason the dumb bell keeps sending down requests for food. The two otherwise bicker and banter with a thoroughly British sense of humor. It is difficult to divulge more without giving away the plot. Needless to say, heads will be scratched.

“[The play] presented us with a plethora of challenges that we worked very hard to combat,” said Cawley. “The first was dialect. Harold Pinter writes his plays utilizing different colloquial phrases and vernacular that would not make sense in American English.”

“The dialects we are working with are differentiated to show characterization,” said Stein. “Matt uses Received Pronunciation, and his more formal accent contracts with my far more low class Cockney dialect.”

“The second biggest challenge,” continued Cawley, “was the ‘Pinter pause.’ These pauses are written into the script, and when done incorrectly often seem like a line has been dropped. It has required us to focus on our stage presence and how we interact with each other and our environment.”

The set, designed by Cawley, is bare and white. Two doors, two beds, the dumb waiter, and not much else—effectively minimalist.

“We chose to perform this play in the Underground Theater because of its location and history,” said Cawley. “This space was converted to theater space approximately two years ago. About four years ago it was a café. Keeping that in mind, I then designed the set to include all of the necessary attributes of this uninhabited basement.”

The pair received brimming crowds and enthusiastic applause for all three performances, even from the members of the audience who were not entirely sure what they just saw.

Pinter passed away in 2008. He received the 2005 Nobel Prize in Literature. With a career spanning over half a century, his frothing insanity, absurd humor and crotchety public persona will be commemorated for generations. Pinter is not exactly an accessible writer for both audience and actor alike, but there is much reward in his work for those who persevere with it, as Cawley and Stein are sure to support.

On the weekend of the 25th in the Underground Theater, Lawrence students Matt Cawley and Steven Stein thrice performed Harold Pinter’s one-act play “The Dumb Waiter” for their senior project. “After considering many possibilities, I settled on Harold Pinter because of his unique style,” explained Cawley. “Pinter is characterized by long pauses, awkward moments and an…