Freshman Emmet Yepa shows being yourself is enough 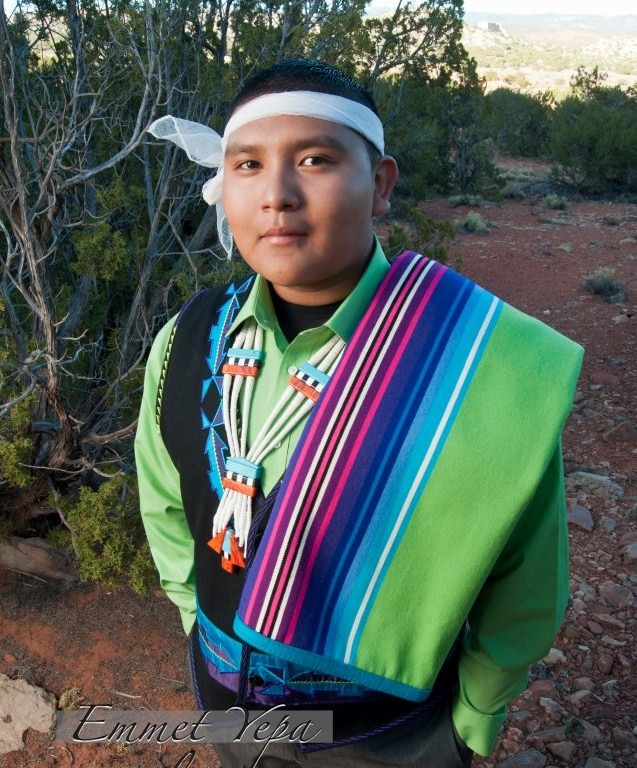 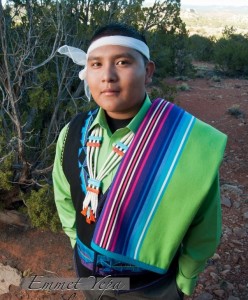 If you have heard Native American Pow-wow style singing, you may agree that it is unashamedly raw and filled with a sense of wild abandon.  The deep pounding of the drum and the high-pitch wailing of voices in chorus can send shivers down your spine and lead you to an understanding of what humanity feels like at the core.  The rich cultural tradition of pow-wow is waning every generation as Native Americans become assimilated into the modern culture of technology, social networking and fast-paced everyday living. Sophomore Emmet Yepa may represent one of the last generations to perform pow-wow music widely.

Pow-wow is sung in a high pitch usually, while the tradition in Jemez Pueblo is lower pitch. Pow-wow also has a unique song-form, according to Yepa, which consists of a solo lead echoed by the group and four alternating ‘verses’ and ‘choruses.’ The local style is different, and sung in a completely different language. The language native to Yepa’s tribe in Jemez Pueblo is Towa, and this tribe is the only tribe in the world that speaks this language.

In the 80s, Yepa’s father and friends brought Pow-wow singing to this small pueblo from tribes of the plains, such as the Sioux. At first, this radical notion was met with apprehension. The community of Jemez Pueblo thought this style of singing would interfere with the traditions of the community. But in time this new style has been met with much popularity.

Now, Emmet sings and drums alongside his father in a popular group now known as Northern Vibe, formerly known as the Black Eagles. The group has won a Grammy and was nominated for a second, a tremendous opportunity for someone as young as he was at the time. Yepa has had his share of struggles, however.

When going through puberty, Yepa lost most of his vocal ability. He says he wanted to quit. He couldn’t deal with losing the ability to do something he knew so well in his head.  But Yepa never gave up and took the easy way out.  He worked extremely hard to get back the high notes in Pow-wow singing and now he says he can sing better than he could before his voice changed.  Today, Yepa teaches his younger brother the way his grandfather taught him. But Yepa is about more than just singing.

In the summer of 2007, Yepa took summer courses at a new school for Native Americans in Albuquerque.  Among the subjects he studied was environmentalism, and he realized that Jemez Pueblo was not recycling. He knew it was a tragedy to see trash in the beautiful mountainous areas of New Mexico. At a harvest celebration known as Feast Day, Yepa noticed many recycling bins in another pueblo and he thought of his summer course. He wanted the same for his pueblo, but he wondered if the idea was just in his head. With three other youth members, he went to the tribal council and spoke with them about starting a recycling program before Jemez Pueblo hosted their own Feast Day.

With support from the tribal council, Yepa and his friends would put in the work to get this recycling program started.  Other peers made fun of them and they thought it was strange that they would do what they were doing, but Yepa pushed on with the other youths. In time they gathered a modest collection of recycling bins and plastic bags and on Feast Day they gathered, sorted and shipped two entire truckloads down to the recycling center in Albuquerque.  News of this accomplishment spread very quickly.

Soon Yepa had even more support, and he went to speak at a National Health Conference in Denver, CO. One day, he heard about the opportunity to send a letter to President Obama about facilitating change in his community.  Yepa didn’t think anything would come from it, but his grandmother urged him on. Sure enough, Yepa sent the letter in, and he was accepted as one of only 11 Native American youths to go to Washington D.C. and meet the President. And yet his reward does not stop there.

Emmet Yepa also applied for the Gates Millennium Scholarship, and because of his contributions he won a scholarship that will pay for any amount of education through his doctorate degree.

Through all the singing, the Grammys, the conferences and the scholarship, Yepa is always inspired by the guidance of his grandparents. They taught him to always be himself and do what felt right in his heart. They told him through all his success not to ever think he was better than other people.  We can plainly see that Yepa will continue to make great changes, but he has only ever strived to be himself.

On campus, Yepa keeps a low profile. He lives in Kohler, maintains a few very close friendships and calls home to his family every day. Though he was just seen performing as he introduced a piece in the Lawrence Symphony Orchestra concert on Sunday, he normally just likes to hang out with friends, study and work out.

Though some people don’t realize it, being completely true to yourself and never letting go of what you want is not only enough; it is the key to success. Emmet Yepa knows that.