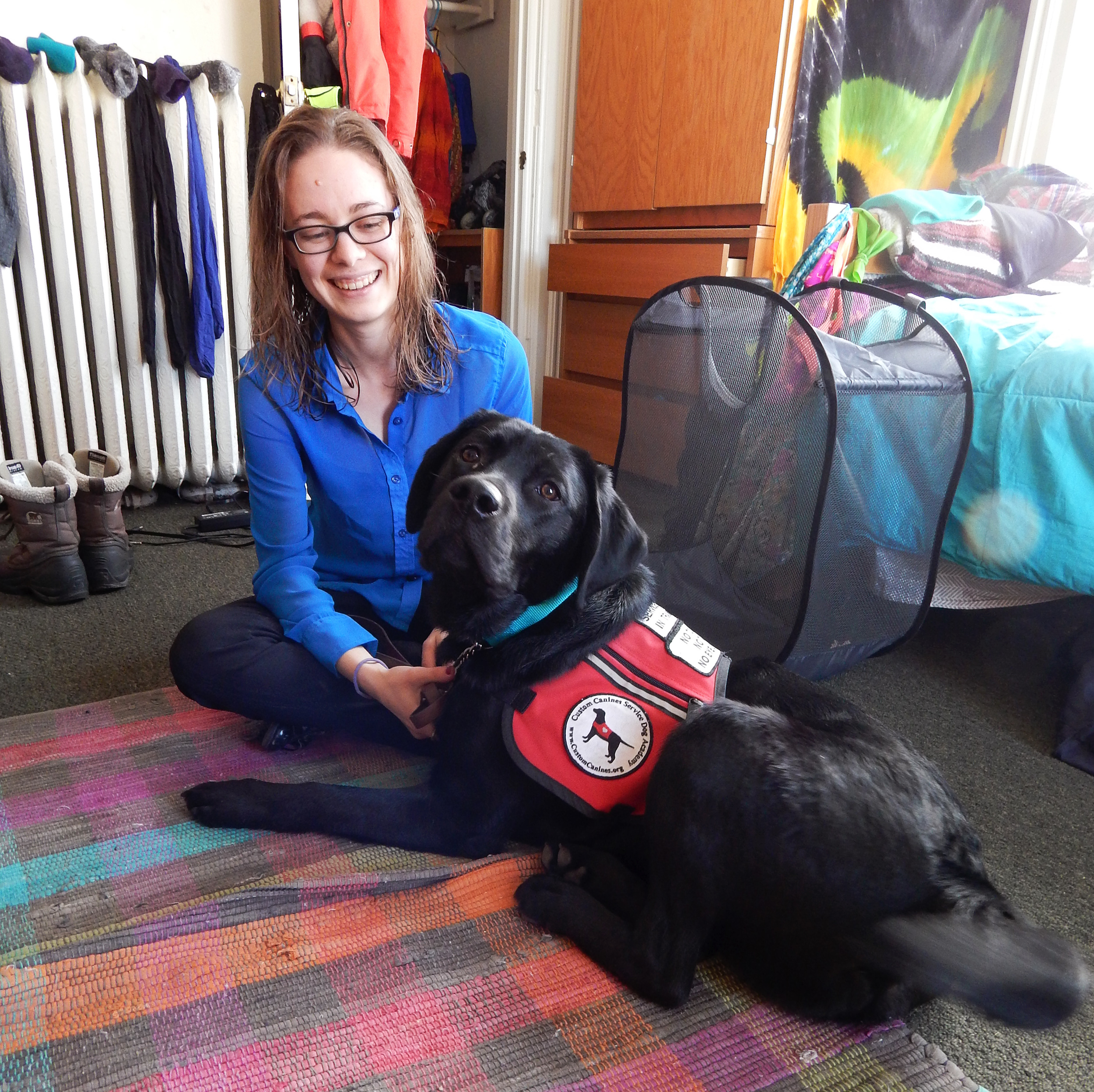 Cameron Murdock leans against the wall in Greenfire’s living room. Hazen, who has until now been snuffing along the bottom of the couch for remnants of dinner, becomes alert. With a sense of purpose that is impressive for one so young, he makes a beeline for Murdock, jumps up on his hind legs and, using his snout, flips the light switch beside her.

Murdock presses her clicker once and reaches into her faded blue fanny pack for a treat. Hazen engulfs almost her entire hand to get it, and it becomes obvious again that he was only recently a puppy.

The whole exercise passes without a single word from Murdock, a junior music major. She explains to me that when Hazen becomes a service dog for a person in a wheelchair, as she’s training him to be, he will need to intuit the needs of his owner. Add to this her philosophical avoidance of the word “no” when dealing with dogs, and their training sessions pass almost entirely silently.

It’s a remarkable thing to witness: “But how does he know?” I keep asking. When Cameron and I sit down to chat, the smallish black lab squeezes into the space between her legs and rests his head on her foot. He looks up with those deep brown puppy dog eyes, and Cameron looks back. Again, words are unnecessary.

In just over four weeks, Murdock will leave for a term abroad at the London Centre. As her adventure begins, so will Hazen’s, as he finishes training and embarks on his life as a working dog.

It’s an outcome months in the making—years if you consider Murdock’s background training dogs, which goes back to her high school years when she participated in a service dog training afterschool program in her hometown of Santa Fe, N.M.

After a few years of the program under her belt, Murdock qualified to train her own dog. “I begged my parents to let me,” Murdock said. “And then I got Cami.” Cami, a yellow lab breeder, was “an ideal service dog. She was already done.”

After Cami came Gilbert, a black lab, and after Gilbert came his brother, Blake, each dog representing a greater challenge. Cami needed no additional training, just care. Murdock had Gilbert when he was younger, so she taught him basic skills like “sit, lie down, learning how to stay. With Blake it was more specific things like learning how to lie down on someone’s lap, or how to open a door.”

When she began attending Lawrence, Murdock left dog training behind. But she missed the reward that came with “seeing that connection of me being able to communicate something without words. Being aware of myself enough to influence another person or animal. That’s really inspiring to me.”

So last summer, when Murdock heard about another university doing service dog work, she was excited. “I wondered if something like that could be done at Lawrence.”

Some quick online research revealed half a dozen organizations in Wisconsin doing work similar to what she had done in New Mexico. Murdock called all of them. Only one responded. It was Custom Canines Service Dog Academy, an organization out of Madison. Next she contacted Nancy Truesdell, Vice President for Student Affairs and Dean of Students.

Finally in October, after several phone calls and many emails, Murdock was the proud—and temporary—guardian of a certain ten-month-old black lab with a voracious appetite and great work ethic.

Last fall, just a few weeks into their time together, I was with Cameron and Hazen in the café during the busy lunch hour. As we stood in line I witnessed the many reactions people have to a person with a service dog. The sidelong glances of the curious. The wide berths of those eager to respect the boundaries of a working dog. One student, bagel in hand, reached down and scratched Hazen between the ears, apparently oblivious to the significance of the red and black service vest.

Murdock says the difference between this term and the last one has been enormous in the way people respond to Hazen. “I think it’s been great educationally, the amount that students have changed in being aware of [Hazen] and supporting me when other students don’t know what to do. Saying, ‘This is how you act around a service dog, this is the kind of behavior you’d expect.’”

Indeed, that educational opportunity is one of the reasons Truesdell was eager to smooth the way for Murdock to have Hazen on campus. It took a bit of finesse, but “making an exception to the pet policy in this case seemed warranted because of the important work Cameron is doing and because there is educational value for the rest of campus,” Truesdell said.

And the rest of campus has had many opportunities to learn, with Murdock taking Hazen just about everywhere, including her classes, the library and cafeteria. The one place she won’t take him? Orchestra rehearsal. “Too many expensive instruments!” Murdock says with a laugh.

Hazen has had other, no less significant effects on Murdock and the people around her.

Junior Sofie Yang, who lives just across the hall from Murdock, says she enjoys the eager energy Hazen brings to campus.

“I love how if I’m walking [with Murdock and Hazen], how excited he gets for the snow, for everything. It helps me look at Lawrence in another way,” Yang said.

For Murdock, Hazen’s biggest impact has been in her daily routine. From the time she wakes up Murdock’s schedule is wrapped around the needs of Hazen to eat, to train, go to the bathroom, go for a walk.

“It’s very grounding, because I have all these assignments to work on and I have to go to orchestra. But oh wait, I need to eat, he needs to eat, I need to go for a walk.” The lab reminds her, interestingly enough, of her own humanity.

Hazen is nearing the end of his training, 90% of which, according to Murdock, is simply learning how to be around people. The other 10% includes: flipping light switches, pushing buttons, like those used to open automatic doors and pulling or pushing open non-automatic doors. Lately he’s been working on pulling off loose articles of clothing, like jackets and socks, a skill necessary to assist people who may not be able to reach around or bend down.

When Murdock demonstrated his progress in this skill, Hazen managed to pull her sock about half way off, using his sharp puppy’s teeth carefully. It was easy to see that soon he will have mastered that skill.

With the end in sight, Murdock is preparing to part from a dog that’s been under her sole care for almost six months. It will be hard, but Murdock is excited for Hazen to put all of his skills to use. “He’s such a focused dog, she said, “he loves to work, work, work.”

Murdock has also witnessed the powerful bond that forms between working dogs and their owners, sometimes instantaneously. “Sometimes you see a puppy go into an interview [with a potential owner] and they don’t want to leave. They’ve met this person for five minutes and that’s their person. They forget about their two years [with their trainer] because they’ve found their person.” She hopes the same happens for Hazen.