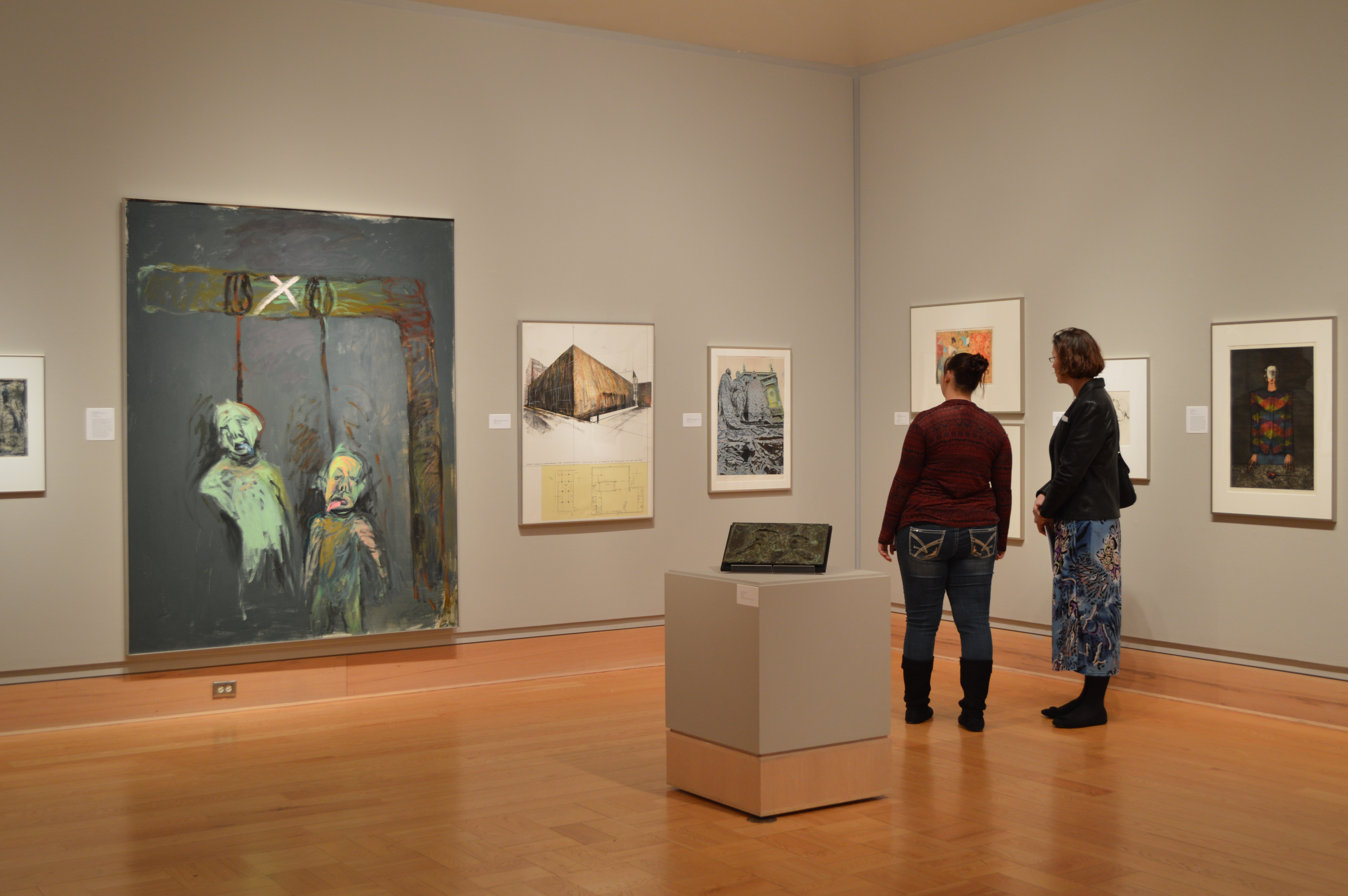 On Friday, April 3, the Wriston Art Center held an evening reception celebrating the opening of three new exhibits. The event was open to the public, and was attended by many Lawrence alumni from the Fox Cities. This being my first evening event in Wriston, I was curious as to what the experience would be like. I honestly had no idea what to expect when I entered the building.

In contrast to Wriston’s usual layout, the upper–level lobby was dressed up quite tastefully for the reception. There were cocktail tables set with smart black tablecloth and candles under dimmed lights, a table providing refreshments to eat and drink, and a wide array of students, faculty, alumni and community members. From the level below, the soft melodic tones of the Lawrence Jazz Band floated up to the balcony.

The three exhibits unveiled were “Through Alice’s Eyes: An Exhibition in Honor of Alice King Case” in Leech Gallery, “Martin Brief: Amazon God” in Hoffmaster Gallery, and “The Pursuit of Knowledge and Understanding: Recent Acquisitions in an Interdisciplinary Context” in Kohler Gallery. Each exhibit had a certain character to it, giving each gallery a distinct air as I walked through them.

“Through Alice’s Eyes” is an exhibit in memory of Alice King Case. Case was a professor of studio art at Lawrence for 20 years from 1980 until 2000. Professor Case passed away in 2013, and her family donated several of her works to the Wriston Art Gallery, which are displayed in the exhibit. Off to one side, there was a handmade journal made by alumna Lauren Andrews ’99 for former students and colleagues of Professor Case to write about their memories of her.

Professor Case’s work displayed in the gallery was very interesting and unique. One painting that I found myself in front of for quite a while was called “February Blizzard.” It was quite intriguing to me, because although an impermeable wall of falling snow on a white surface sounds impossible to portray in an aesthetically appealing manner, Professor Case had done just that. Looking at the painting, I felt like I was lost in that blizzard and could barely make out anything beyond.

The memory of Professor Case was a tangible presence in the room. Though the event was a joyous one, tears were shed and heartfelt stories shared. I spoke with alumnus Charlie Arnold ’01. He was a studio art major and student of Professor Case. Arnold shared with me some of his greatest memories of her. He spoke of a time when Professor Case and he had a deep and memorable conversation for 20 minutes in an elevator, and the time when the two of them discussed topics of all sorts while watching the stars at Björklunden.

Her unique personality, her way of pushing her students to do their best and the experiences they shared are the primary influences Arnold cited for becoming a professor of studio art himself.

All three of the exhibits in the gallery were beautiful and thought-provoking, from “Amazon God,” a list of all book titles on Amazon.com containing the word God, to the multidisciplinary works representing the heart of the liberal arts in “The Pursuit of Knowledge and Understanding.” It was truly an amazing night at Wriston, and I encourage everyone to see the exhibits for themselves. They will be open until May 3.