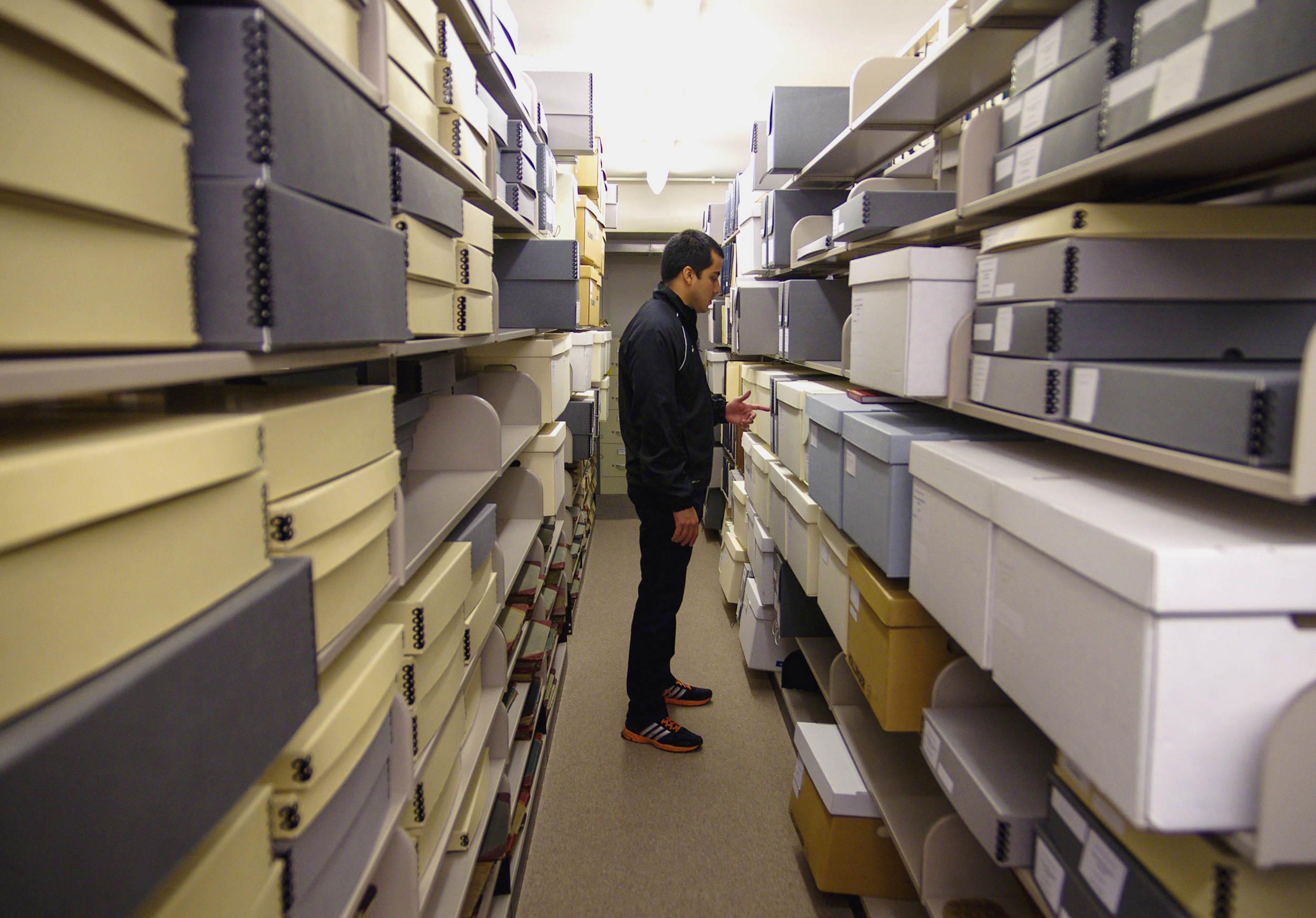 Scrapbooks from two Lawrence alumni preserved at the university archives illustrate student life between 1910 and 1915 , and provide opportunities to understand our history as Lawrentians. Scrapbooks were a frequent item among Lawrence students up until the 1960s, according to the records. The first album belonged to Frances Hogg Brown, who attended school from 1911 to 1915; the second was from Dean Earl Smith, enrolled from 1910 to 1912.

University Archivist and Assistant Professor Erin Dix, who is in charge of the school’s historical and material collections: “My job is to promote understanding of Lawrence’s history and to manage this stuff. I thought I would tell you a little bit about some of my favorite types of materials that we have here.”

“Here’s one of the first pages she has written down [and] other students have [also] written down their names and little quotes, whatever they want to communicate, happy thoughts,” said Dix. For example, on Dec. 4, 1913, student Addie Harley from Green Bay wrote: “To my little side partner at the French table, nous somme bonne amies, n’est-ce pas?”

Brown’s album photographs provide a personal record of her years at Lawrence and equally illustrate specific campus buildings that still exist today. She wrote, “Lawrence is our dear old home,” in a section in which her dorm, Ormsby, can be seen with a porch with elegant Greek columns that ornament the building’s entrance.

The images likewise show buildings that were demolished several years ago such as the old gymnasium (located where the Buchanan Kiewit Wellness Center stands today) as well as the observatory and science hall (both located where Youngchild and Steitz Halls coexist today).

Activities depicted include knitting together, walking down the Fox River, drinking tea with roommates, dressing up and attending all sorts of Lawrence festivities, from Valentine’s parties to Thanksgiving gala dinners. “For instance, here, she’s just gotten up before Christmas [and written] ‘we’re as busy as can be’ and she’s got nice captions here, and you don’t always see that with scrapbooks,” Dix said.

Brown also collected photos and memories from May Day celebrations where hundreds of students gathered in front of Main Hall. Girls danced to Greek songs around the may pole while the public watched. There were also processions in chariots around campus and everybody dressed in white. May Day declined in popularity in the late 20th century.

Brown’s book included a piece of rope from a tug of war contest and also collected pictures of her friends in action. “Here’s a tug of war game going on. These are really cool to just sort of look to and get a sense of what student life was in 1915,” Dix noticed.

Another distinguished item is a membership ticket called “All College Club,” that granted Brown and all students who bought it, for $2 at the time, access to one semester’s subscription to The Lawrentian and admitted the students to all games and contests in athletics, oratory, debate and any other events presided by the Student Senate.

Smith’s book, a brown chamois rectangular-shaped photography album, contains tens of Lawrence pictures between 1910 and 1912. “This is more of a photo album. There’s no other weird stuff in it but just pictures… He attended for two years…” said Dix. He did not graduate, “he moved… but he became a photographer in his later years after he left Lawrence,” Dix added.

The photo album provides detailed pictures of places, such as College Avenue, panoramic aerial views of Lawrence’s campus and many of the important buildings at the time: the gymnasium, observatory, Science Hall, Ormsby Hall, Carnegie Library (located where the Seeley G. Mudd Library currently stands) and Brokaw Hall.

Many students today might have heard about The Rock, which disappeared many years ago and whose whereabouts remain a mystery. Both Brown and Smith included pictures of this ancient symbol of Lawrence’s generations in their albums. It is highly probable that they met in school 104 years ago since the student body was below 800 people, according to Dix.

Most importantly, both Brown and Smith captured the visit of President William Howard Taft to Lawrence University on Oct. 26, 1911, which was the first time a president visited the Fox Cities area.

President Taft addressed a crowd of about 10,000 people from the steps of Main Hall as part of a political tool to pressure the Senate to ratify peace treaties with France and England. “There are pictures of Taft here that are unique and some great candid images as well,” said Dix.