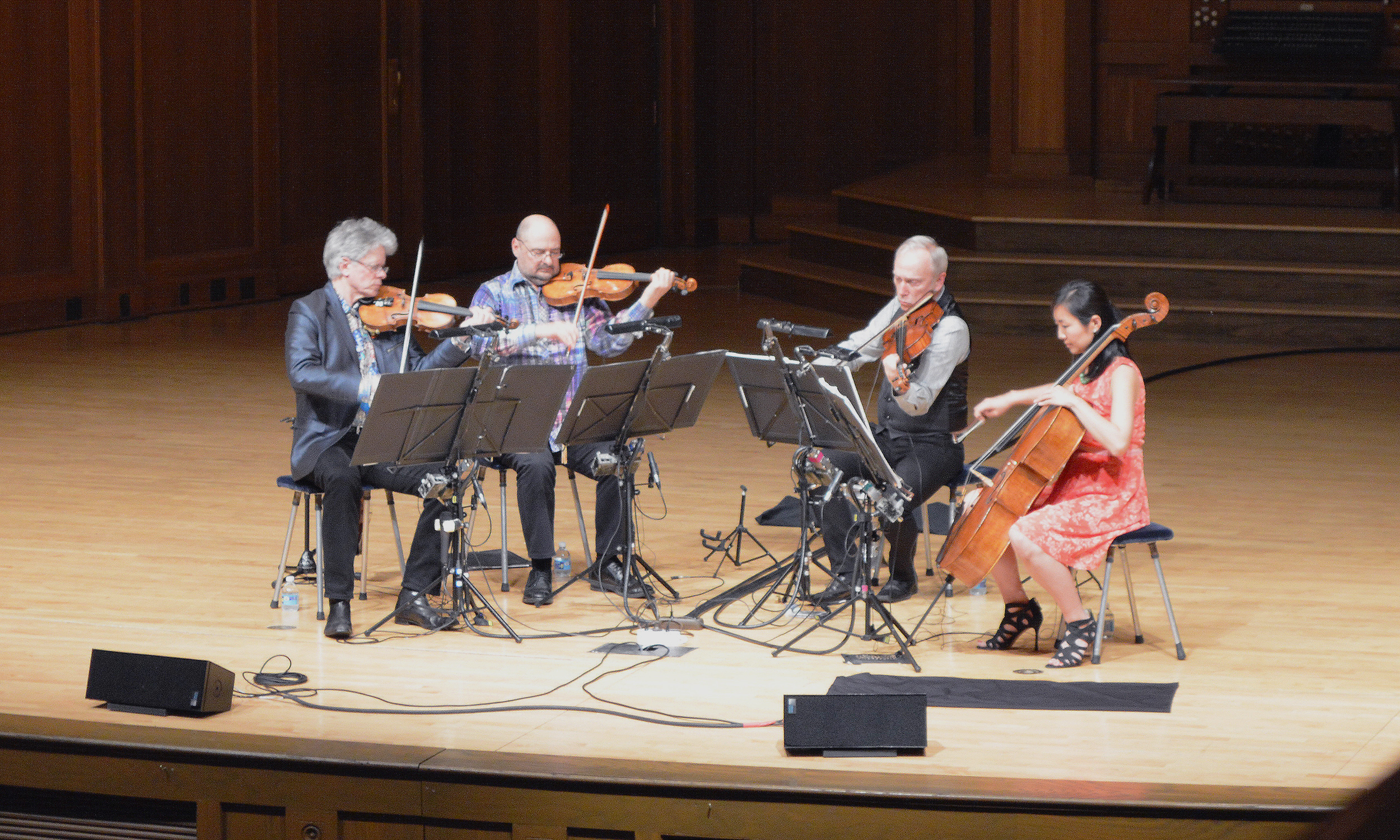 For a traditionally wordless ensemble, Kronos Quartet sure has a knack for making voices be heard. Going beyond their profound musicianship as string players, the quartet utilized spoken and recorded words to highlight the voices of many individuals and communities during their concert on Friday, May 15, in the Lawrence Memorial Chapel. The quartet, made up of David Harrington, John Sherba, Hank Dutt and Sunny Yang, concluded the 2014-2015 Artist Series.

Kronos began their performance with an excerpt from “Salome Dances for Peace,” a massive quartet composed by Terry Riley of “In C” fame. “I thought we ought to create a piece that can be played at the United Nations on special holidays,” wrote Riley in the program notes.

The quartet’s eerily controlled playing during Laurie Anderson’s “Flow” provides an opportunity to make this basic point: Kronos is an unnervingly good string quartet. In awe after that very short, straightforward piece, the audience could not make any mistake of that fact.

Komitas’ “Groung” was a simple, expressive song adapted for the quartet, but its meaning goes beyond its uncomplicated, repeated phrases. Violinist Harrington introduced Komitas specifically as a survivor of the Armenian genocide.

Kronos selected this song not for any virtuosity or complex, progressive composing, but rather to give a voice to individuals that we too often cannot hear. For instance, President Obama was careful not to label the Armenian genocide as such around its 100th anniversary this year.

Especially within the Chapel’s “classical music” programming, which can sometimes seem like a pantheon of white, western European tradition, hearing these marginalized voices is, without a doubt, even more crucial than playing in tune, ensemble cohesion or any of Kronos’ other skills.

Multiple times during Vladimir Martynov’s “The Beatitudes,” a re-imagined choral work commissioned by Kronos for the fifth anniversary of Sept. 11 attacks, Harrington’s violin climbed to an extraordinarily high point in the instrument’s range.

Each time, he would simply return to the lower range, with no major repercussions in the rest of the ensemble, as if there was no point in trying to transcend the physical instruments they were bound to. That same humbling quality existed in subtle, intentional flaws interspersed throughout the work.

Kronos ended their first half with Mary Kouyoumdjian’s “Bombs of Beirut,” a piece so frightening and affecting that it required a trigger warning in the program. Throughout the first section, “Before the War,” the quartet quietly boiled underneath recorded recollections from survivors of the Lebanese civil war. By the end of the second section, “The War,” I was shell-shocked, literally. When the recollections of wartime had reached their linguistic limits, the quartet dropped out, the voices stopped, the lights in the Chapel went black and recordings from the actual war resounded throughout the Chapel. Following the final section, “After the War,” my body was devoid of impetus, not out of pleasure or admiration, but because Kronos had thrown every bit of energy toward Beirut.

The intermission was not nearly long enough for that feeling to dissolve, rendering the opening of Kronos’ second half, “Elvis Everywhere” by Michael Daugherty, momentarily unwelcome, even inappropriate. The work picked apart the preposterous notion that Elvis could still be alive, coming to the conclusion that, through his impersonators—three of whom we heard as recordings—he remains everywhere, never actually leaving the building.

In performing Geeshie Wiley’s “Last Kind Words,” a rather early blues tune, Kronos refocused our historical understanding of American popular music toward its female participants. This falls directly in line with “Elvis Everywhere,” in which Daugherty gave prominence in the recorded track to a female Elvis impersonator.

Apart from the unfortunate timing of “Elvis Everywhere,” the most bothersome aspect of the second half was their performance of Jelly Roll Morton’s “Dead Man Blues.” Performed alongside a tape of Morton’s ground-breaking early jazz pianism, the work elicited nothing much beyond nostalgic grins.

I found this mysterious given the actual nature of the work. Those who bobbed their heads along to the “idyllic” early American sound could have had no way of knowing that that “Man” was “Dead,” or how he ended up with the “Blues.”

Also, how could we enjoy a piece in that way when it included a quote from the “Funeral March” in Chopin’s second piano sonata, an intensely dark, twisted and ultimately devastating work? I suppose this is not a criticism of Kronos or Morton; it’s more just about how we as 21st century audiences tend to process certain musical works.

The concert proper came to a close with Charles Mingus’ “Children’s Hour of Dream,” a disorienting, scraping whimper, and Dan Becker’s “Carrying the Past,” a mediated examination of the composer’s father’s early jazz recordings.

With a nearly immediate standing ovation, the audience demanded two separate encores. They first played a traditional Lebanese springtime song and concluded with a bluegrass showcase of violinist Sherba’s virtuosity. As a six-year-old listener had described it after a recent Kronos performance, “That was bad ass.” I couldn’t agree more.