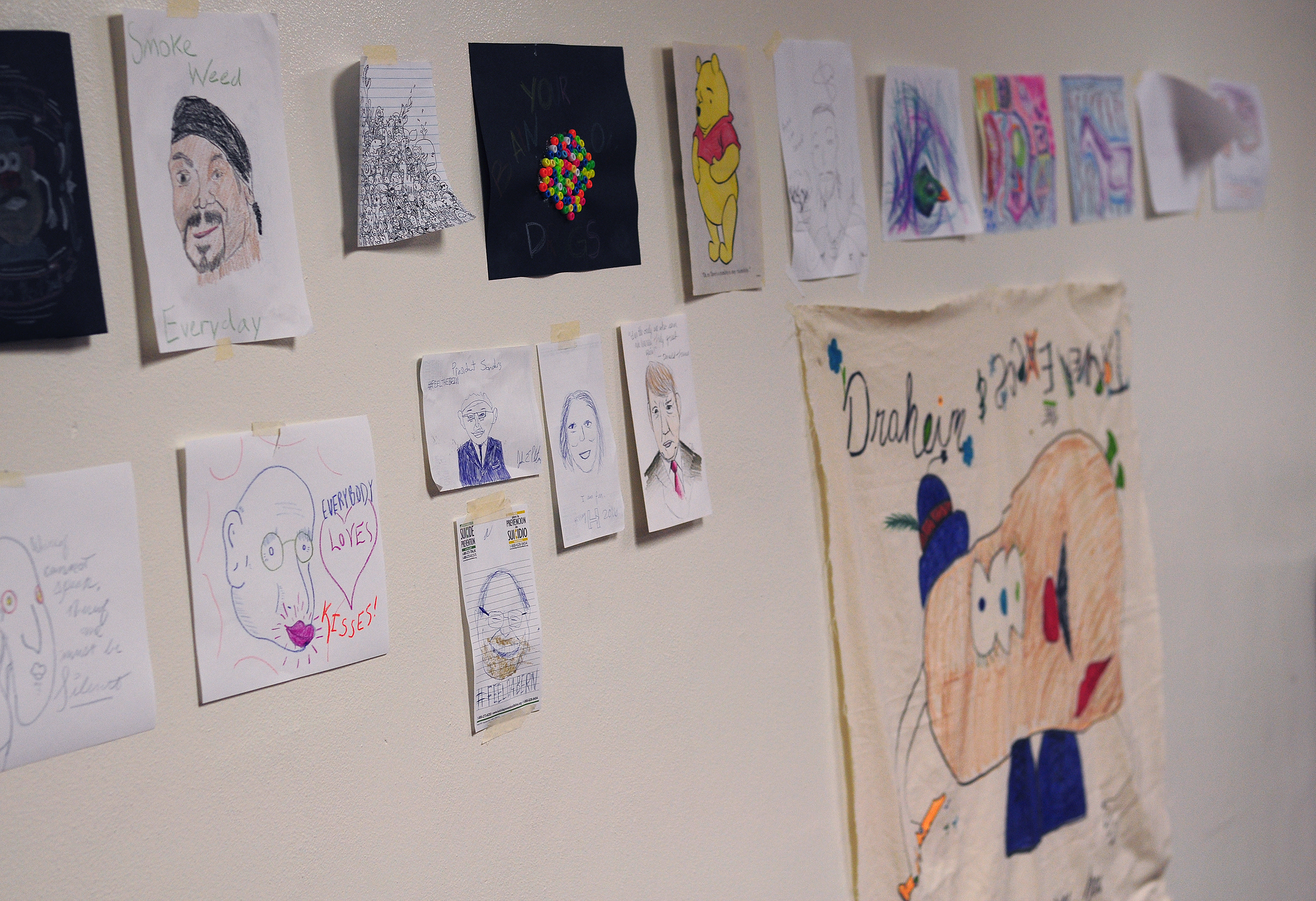 On cold winter weekends at Lawrence University, many students seek exciting new indoor activities. Friday, Jan. 22 in the basement of Trever Hall, several student bands and artists came together for Trever Presents, a night of entertainment meant to show off students’ artistic talents. Many came to enjoy the music and look through a small gallery of student artworks.

The list of advertised performers included MF Gritz, Wild Firth, SK8 City High School All-Star Jazz Band, No Pretty Things and DJ Boy Potion. The music began at 10:30 p.m. and lasted until after 1:00 a.m. Each group played a 30-minute set before handing the stage to the next.

The students who organized the event made sure it did not feel too formal. The decorations and advertisements were homemade. In the entryway there was a large poster with the directions “draw something” written at the top. Students drew pictures and wrote messages using provided crayons.

The main room was decorated with streamers, lit by Christmas lights and warmed by moving bodies. Audience participation was encouraged and the crowd clapped and swayed to the bands’ tunes.

SK8 City High School All-Star Jazz Band, a smaller group consisting of three people, played many energetic and lengthy songs. Their instrumentation—guitar, saxophone and percussion—allowed them to create a wide variety of moods. As it was early in the evening, the crowd cheered and rocked with vigor.

Later, sophomore Elliott Dryjanski brought out a guitar and special pedals to perform as No Pretty Things. Each song was slow and contemplative. Many students sat down on the floor to listen as he sang softly over electronically modified soundscapes.

In a small room branching off of the main basement lounge, there was a gallery of student artworks. There was a mix of serious and light-spirited pieces. Some of the satirical pieces—a snowflake made out of an empty Cheetos bag, a wall-display of pages from a Yoga Dogs calendar—gave off a cynical tone.

There was a small, hastily made sign that read, “This isn’t art.” In the middle of the floor, there was a pile of torn-up Fox Cities Yellow Pages books, some furniture and found objects. There were appetizers set out, including cheese, crackers and drinks, but it was unclear whether they were meant to be eaten or were part of the gallery.

Some of the works were very carefully made. Mixed among the aforementioned pieces, there were detailed illustrations, paintings and even hand-sewn designs. Using dark background fabric and colorful thread, they had messages like “My uterus, my choice,” “crush the patriarchy” and “me gusto sera tuna zorra.” Unfortunately, none of the artists were credited.

Attendees of Trever Presents got to learn about the abilities of their fellow students who submitted art or played in the bands. It was good to see Conservatory musicians play secondary instruments and studio artists explore alternative media as well as students outside both departments partaking in creative expression.

On cold winter weekends at Lawrence University, many students seek exciting new indoor activities. Friday, Jan. 22 in the basement of Trever Hall, several student bands and artists came together for Trever Presents, a night of entertainment meant to show off students’ artistic talents. Many came to enjoy the music and look through a small…