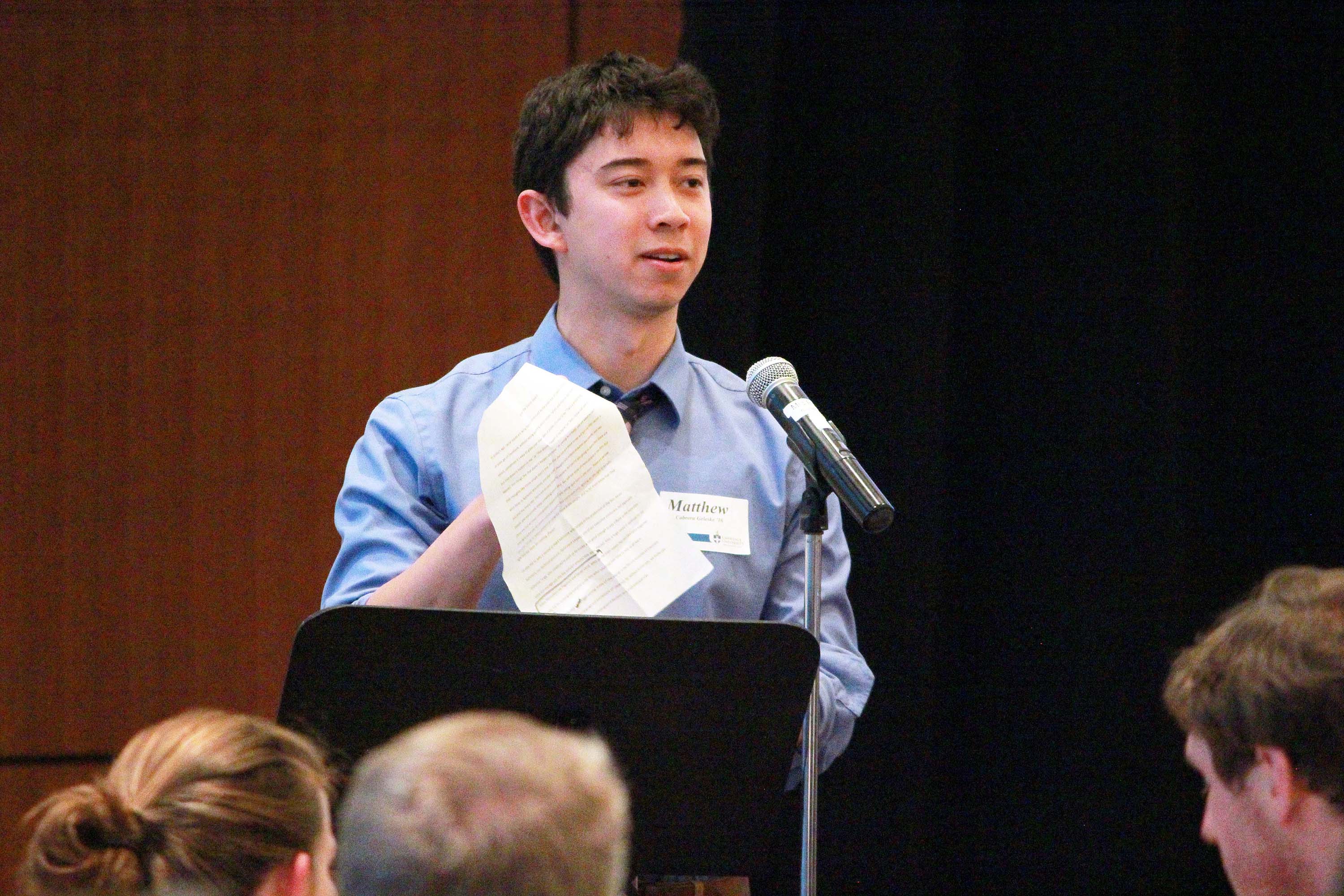 Senior Matt Geleske speaks about the film he, Joe Pegorsch and Daniel Card directed for the project.

Last Wednesday, May 3, the fourth annual celebration of the Civic Life Project brought thought-provoking documentaries to the Lawrence community. The event, which ran from 6 p.m. to 8 p.m. in the Somerset Room of the Warch Campus Center, showcased four student-directed documentaries and allowed community members to share their thoughts on the issues portrayed.

The Civic Life Project is a nationwide effort to engage students in community issues through documentary filmmaking. Over the course of the past year, four teams of students were given ten weeks each to research, write and direct a film on a community issue that interested them. Artist-in-Residence in the Film Studies department and organizer of the project at Lawrence Catherine Tatge asserted, “We want to engage community members in thoughtful dialogue about how we can help each other help one another. We’re all an important part of the dialogue.”

To begin the evening, Tatge welcomed guests, noting that “it’s really amazing to see everyone here, and the support we get from this community.” Students, faculty, staff and others claimed their seats at the round banquet tables. The evening was structured as a guided viewing, with a student moderator at each table.

Attendees watched each of the new Civic Life Project films in turn, and after the viewing the student moderators led 10-minute discussions on the issues presented. Lawrence University President Mark Burstein introduced the event with a short speech, and the showcase began.

Junior and film major Hugo Espinosa introduced the first film shown, “Brown Water.” Espinosa, who produced the film alongside seniors Jamie DeMotts and Taylor Dodson, described it as “a brief investigation into the issue of groundwater pollution affecting our neighbors just outside of Appleton.” A thoughtful documentary which explored the connections between groundwater pollution and dairy farming, “Brown Water” presented the issue at hand from various perspectives.

After the showing, the audience erupted into a lively discussion on groundwater issues. While most audience members agreed that public health and environmentalism are important issues, they shared different perspectives on how to fix the problems presented.

The second film, “A Generation On Change,” told the story of a transgender youth in the Fox Valley. Junior Chris Gore-Gammon introduced the film, which he and Htee T. Moo ‘15 created. “This was something that we both felt privileged to do,” Gore-Gammon said, “not only because we are part of the transgender community, but also because we did not come from backgrounds like that shown in the film.”

Rowan Saecker, the subject of the documentary, shared her story of coming out as a trans girl in Appleton. Although her parents were supportive, Saecker still faced issues of discrimination and stigmatization. “The biggest message of our film is the importance of respect,” noted Gore-Gammon.

Next, Senior Rose Nelson introduced the film she made with sophomore Sara Morrison, “Confinement,” or “Mental Health in the Prison System,” an introspective investigation into the relationship between mental illness and incarceration. The film discussed how mental illness can cause criminal behavior, and how the criminal justice system often lacks appropriate tools to care for the sick. A lively discussion followed the film, as many audience members shared their own experiences with mental illness and the problems it can cause.

Finally, presenters showcased the newest film of the group, “Breaking the Silence.” Directed by seniors Daniel Card, Matt Geleske and Joe Pegorsch, the film dealt with the impact of racism in the Appleton area, and how racial injustice can affect community members of all types. In the documentary, many Lawrence students shared traumatic stories of racism within the city. The film raised questions on how to deal with prejudice in our community and motivated attendees to act against injustice.

During the showcase, Tatge emphasized the importance of self-expression and education in becoming engaged members of society. “We’re all so energized by the current elections, and I think we can all agree that democracy matters,” she noted. “But democracy rests on the shoulders of our children who will inherit our world. The Civic Life Project gives students a voice, a way to explore issues in our community and [a way to] express how they feel about that.”

Photo by Luke Payne Last Wednesday, May 3, the fourth annual celebration of the Civic Life Project brought thought-provoking documentaries to the Lawrence community. The event, which ran from 6 p.m. to 8 p.m. in the Somerset Room of the Warch Campus Center, showcased four student-directed documentaries and allowed community members to share their thoughts…