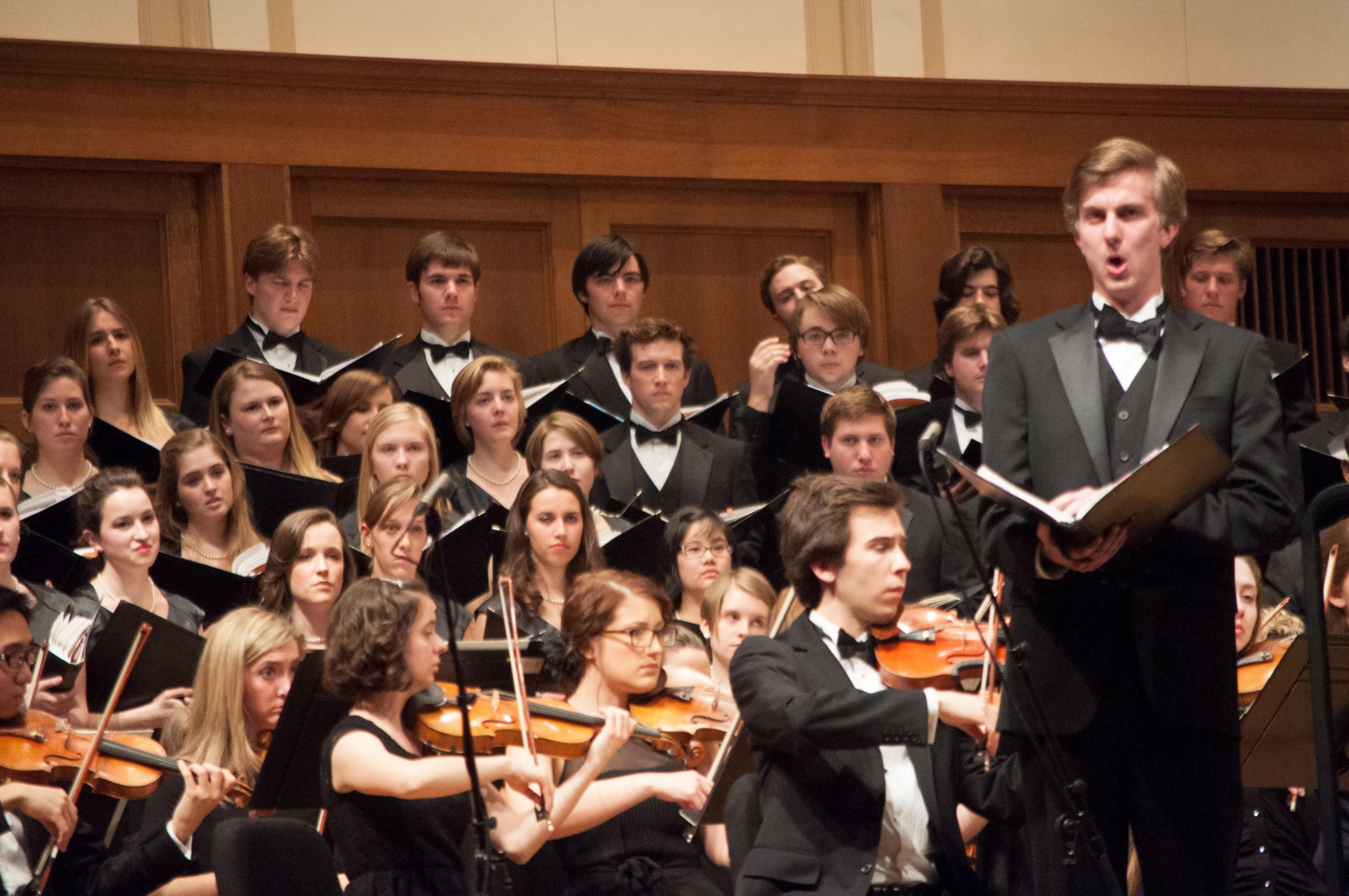 Memorial Chapel was home to a collaboration of the Lawrence University Symphony Orchestra, Viking Chorale, Cantala and Concert Choir on Friday, April 20, when the groups teamed up to perform George Frideric Handel’s well-known work, “Messiah.”

Under the direction of Assistant Professor of Music Stephen Sieck, these ensembles created an exquisite evening of 17th century music, spotlighting the talents of Lawrence musicians through their attention to detail and a shared sense of spirit between all of the performers. The audience’s view was overwhelming as the stage overflowed with instrumentalists and singers, with singers also filling up portions of the balcony, creating a powerful wall of sound when singers and the orchestra united.

Written in 1741, “Messiah” is a highly celebrated Baroque oratorio and today is usually associated with the Christmas holiday. What may be a surprise is that at the time of the work’s composition, the piece was actually premiered 11 days after the Easter holiday. Lawrence’s performance, 12 days after Easter, helps to recreate the scenario in which Handel’s audience first experienced the piece. While our ensembles worked to capture the spirit of Handel’s premiere, the Conservatory celebrated a premiere of their own as the webcast turned into a videocast and welcomed audiences from around the world into our Chapel.

Though the work was originally performed with a reduced orchestra and a smaller number of singers, Friday’s concert aimed to involve a large number of musicians. Sieck hoped to make “300 students [sound] like 20 capable artists.” Aside from the choirs and LSO players, the concert showcased fourteen spectacular soloists, each exhibiting a mastery of Handel’s decidedly less-than-simple vocal writing. Sieck also welcomed Lecturer of Music and University Organist Katherine Handford to play the harpsichord part, a texture which added to the sense of stylistic authenticity he hoped to convey.

The unification of voice and instrument was apparent in the conversational style of Handel’s writing, which often features imitation between soloist and the orchestra. At the conclusion of the second section, performers and audience members joined together in arguably the most well-known portion of the “Messiah.” As Sieck conducted the opening notes of the “Hallelujah” chorus, the entire chapel rose to their feet and joined in, feeling the power and intensity of hundreds of voices intertwined in the spirit of Handel.

Moments after the massive ensemble played its final cadence, the audience was on their feet, applauding and energized by the spirit of the music. The LSO, Viking Chorale, Cantala and Concert Choir provided an opportunity for performers and listeners alike to be fully immersed in Handel’s masterful writing through a piece that has rightfully survived centuries in musical history.