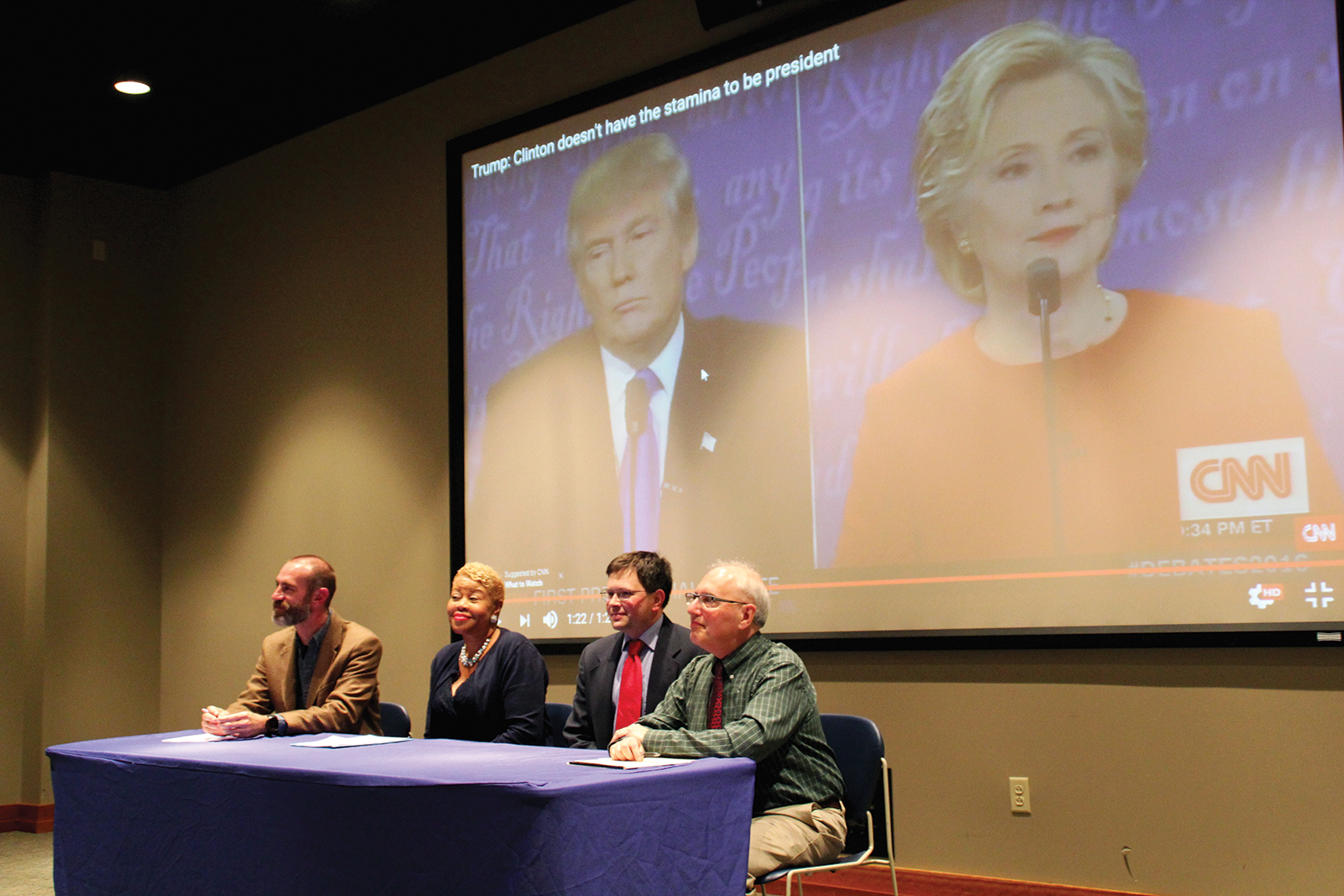 The faculty panel addresses student questions at the end of the event.
Photo by Tabarique Anwar

Each of the five speakers covered specific aspects of the first presidential debate that took place the night prior to the discussion, on Sept. 26. Debate competitors were U.S. Secretary Hillary Clinton and U.S. Presidential Nominee of the Republican party Donald Trump.

Podair commenced the discussion by giving the audience an opening statement regarding the nature of past presidential debates and compared them to the present. Podair then moved on to discuss different points that had been brought up by both candidates during the course of the debate.

Shober took the stage following Podair and offered a discussion of the stylistic errors that had been made by the competitors, with special regard to missed opportunities for rebuttal.

“We know that impressions are formed during the first 30 minutes of a presidential debate,” said Shober. “After that the audience tends to turn off the television due to repetition.”

After Shober, Brozek followed the sequence and emphasized the aspect of the debate that dealt with international law. “Within the first five minutes of the debate,” Brozek shared, “there had been at least four different international laws that were alluded to, but not properly addressed.”

Brozek went on to criticize Trump’s lack of demonstration of the knowledge of the legal obligations held by the United States, and disapproved of Clinton’s failure to recognize the topic of climate change, among other issues.

Barrett was next in the lineup. She made an effort to shift the audience’s focus towards the roles played by gender and race within the debate. Barrett discussed how both competitors proposed to change gender relations if they were elected president, and suggested that Clinton dealt with the topic more appropriately than Trump.

Skran concluded the main discussion event by trailing off of Barrett’s point on gender and elaborating on the body language of the candidates throughout their speeches. “The lack of more explicit snubs on gender,” Skran said, “should be taken as a positive sign on the movement of our politics.”

Skran had also shared some insight on the stylistic features of the debate, namely the choice of clothes and body language made by the candidates.

The event ended with a question-and-answer session, in which students from different concentrations of study expressed their overall views on the debate. Because admission was free of charge and open to the public, the audience was able to accommodate guests from outside the university, as well.