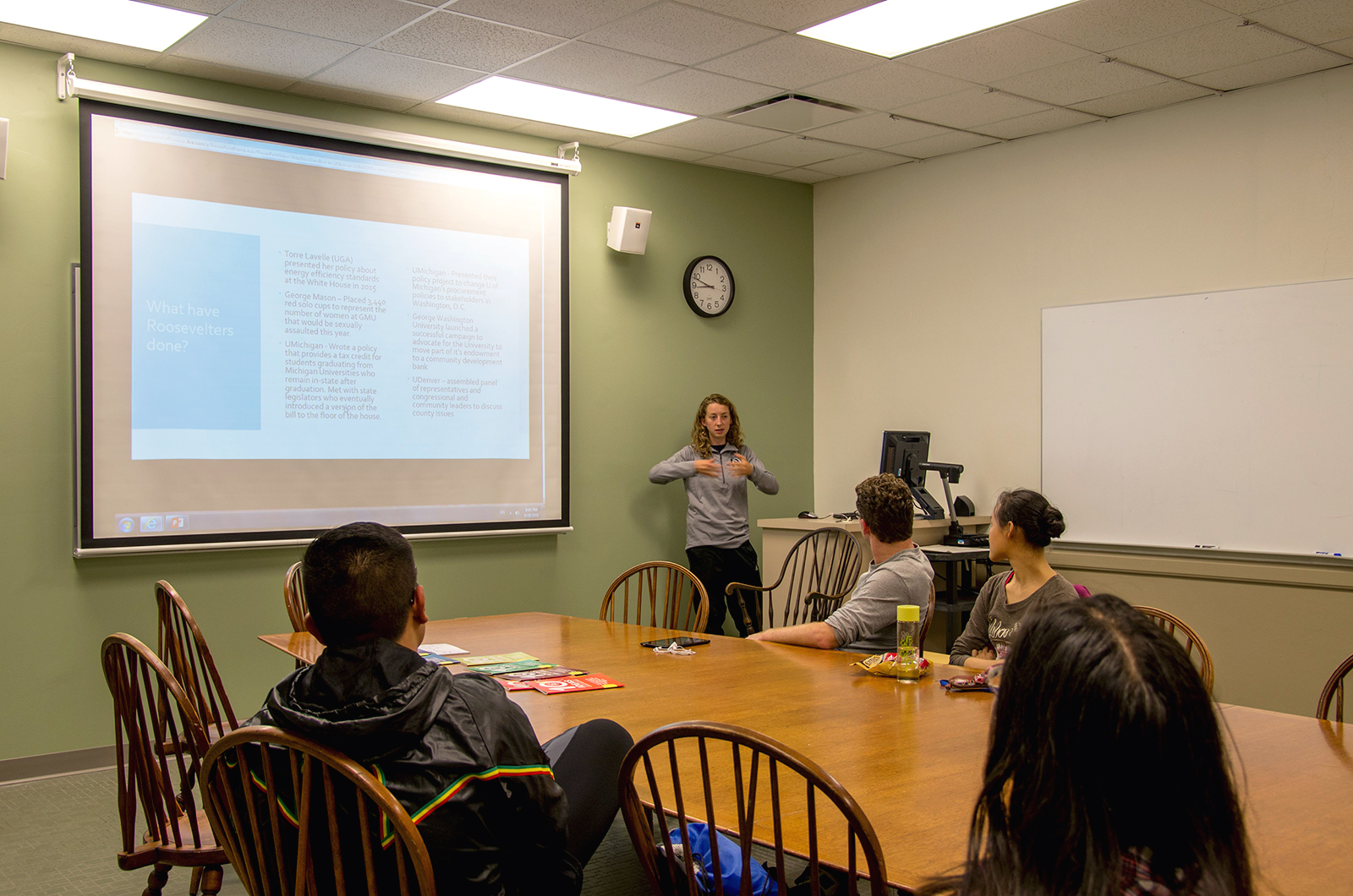 This year, Lawrence welcomed a new student organization, Roosevelt at Lawrence University, a newly formed chapter of the national network of policy think tanks with the same name, Roosevelt Institute. With the mission to help students create, change, research and write about public policy, and to give them training and resources to effect social change, the Roosevelt Institute focuses on six policy areas: education, defense and diplomacy, energy and the environment, economic development, equal justice and health care. There are more than 120 chapters at schools across the country.

Senior and one of Roosevelt’s founders, A.J. Williams, heard about the Roosevelt Institute through the Young People for Social Justice Fellowship from fellow students at other colleges. Her friends from New York University talked about how Roosevelt Institute made an alliance of student leaders and also active students to come together to talk about issues.

“I thought this is something Lawrence really needs right now and we are [talking about issues] in a lot of ways, but not in ways we are serving other people,” said Williams. Williams got the help from junior Eva Tourangeau to help organize and lead the chapter.

Roosevelt at Lawrence University first started meeting unofficially last Spring Term, but will begin to have official meetings starting this term. Currently there are 12 consistent interested members. The organization is typically for larger schools, but can also work for a small campus like Lawrence. Other chapters can range from 15 to 75 people, but the Lawrence chapter hopes to have 25 or more students get involved. With more members there would be more committees on particular policies which would create a better division of labor.

Roosevelt at Lawrence University is highly beneficial to Lawrence campus as it can be a great educational resources for students interested in public policy and careers in civil services and the public sphere. Roosevelt has the potential to spark changes in the community while educating students on how to research and write about policy issues rather than just explain the issues themselves. The core goal for Roosevelt at Lawrence is having more of a plan for addressing issues rather than just talking about them. The chapter is open to anyone passionate and motivated to engage with social issues and policy in any way. There is something for everyone whether it is writing, community leadership, engagement, or social advocacy so as to represent all different identities and perspectives on campus.

The next step for the on campus chapter is to have a prominent social media presence through the Lawrence website, Facebook and Twitter to advertise small events focused on debates such as Wisconsin’s education policy.

For those who do not know what public policy is but want to get involved, Williams advised, “If you are planning to raise your social consciousness do your reading first, know what is happening and know what to be angry about. This is a safe space, one of learning and one of action. I think going into it blind might be a little difficult but at the same time anyone who is passionate about being part of grassroots change this is the place to be. It is a direct root into so many amazing opportunities and planning for your future career.”

“If you don’t have any background on public policy making do not be intimidated to join the chapter,” said Tourangeau, who is a math major and does not have any background in public policy making herself. The chapter also teaches students how our government system works just beyond our college campus and how we can really leverage our voices in the student body and administration to really push forward. If you have something to say or want to make a difference, Roosevelt at Lawrence University is the place to go.