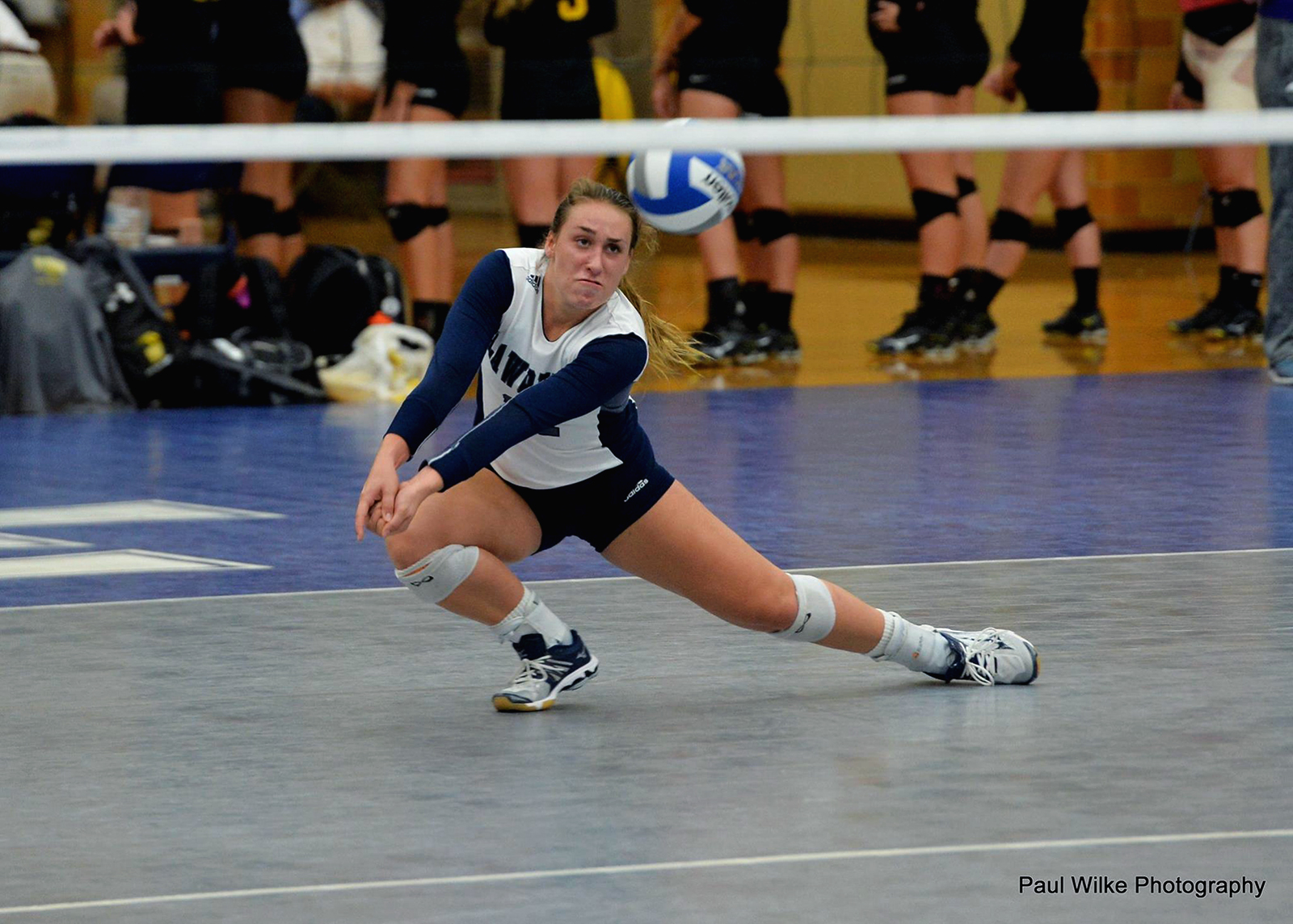 Wins this weekend are a much needed boost for Lawrence Volleyball.
Photo courtesy of Paul Wilke

After being on a run for their money for the last couple of weeks, Lawrence University’s Volleyball team has started October off with two wins against Monmouth College and Knox College. The Vikings, 7-12 overall and 2-2 in the Midwest Conference, played two stupendous games against these colleges last weekend on their home court.

During the game on Friday night against Monmouth College, the Vikings were able to stack up 17 aces, which helped them on their road to victory, 25-21, 25-15, 26-24. This win was Matt Schoultz’s 100th win as Lawrence’s head coach. Each set was very close between Monmouth and the Vikings as they battled on. During the first set, the Vikings were down 17-14 before they took control and pulled out an 8-2 run to close out the first set. The second set was tied 10-10, before the Vikings were able to grab an 11-3 run and pull away from Monmouth. The Vikings were behind in the third set 23-19, before having an epic comeback to win the match as a whole. Freshman Rachel Barthel, had seven aces, while juniors Lauren Ray and Cyra Bammer both recorded three apiece. Along with the 17 aces, sophomore Arianna Neumeyer, had 12 kills, adding onto Barthel’s 9. Junior Sydney Nelson had 16 assists, while Ray had 18, a team high. Bammer and Ray combined had 39 digs for the Vikings. The team had a .238 hitting percentage, with help from Barthel and Neumeyer.

The momentum from the previous day carried over onto Saturday as the Vikings stole a win from Knox, 25-20, 25-16, 25-22. Another close match against a Midwest Conference team. The Vikings led in the opening set, before pulling away on a 6-2 run to make it 20-12 before finishing out the first set. During the second set, the Vikings were tied with Knox at 7-7 before they capitalized on their strengths and beat Knox in the second set. In the third set, Knox was leading 16-11 when sophomore Bryttany Dove recorded an ace and help finish out the set. Neumeyer had a great game, stacking 11 kills, an ace, a block and 9 digs to her collegiate record. In addition to Neumeyer’s feats, sophomre Arianna Cohen, added on to a great game with 8 kills and Claire Vinopal, sophomore, had 7. Nelson led the Vikings in assists with 19, with Ray following closely behind with 13. Bammer collected a match high for the Vikings with 35 digs.

With only six more games left, Lawrence University’s Volleyball team is looking to finish off the season on a high note with as many wins as they gather up before the season is over. Their next game will be at home on Oct. 14 for Family Weekend at 7 p.m. against Lake Forest. They will also have a game on the 15th against Ripon at 1 p.m. as well as the Alumnae Match at 9 a.m.

Wins this weekend are a much needed boost for Lawrence Volleyball. Photo courtesy of Paul Wilke After being on a run for their money for the last couple of weeks, Lawrence University’s Volleyball team has started October off with two wins against Monmouth College and Knox College. The Vikings, 7-12 overall and 2-2 in the…