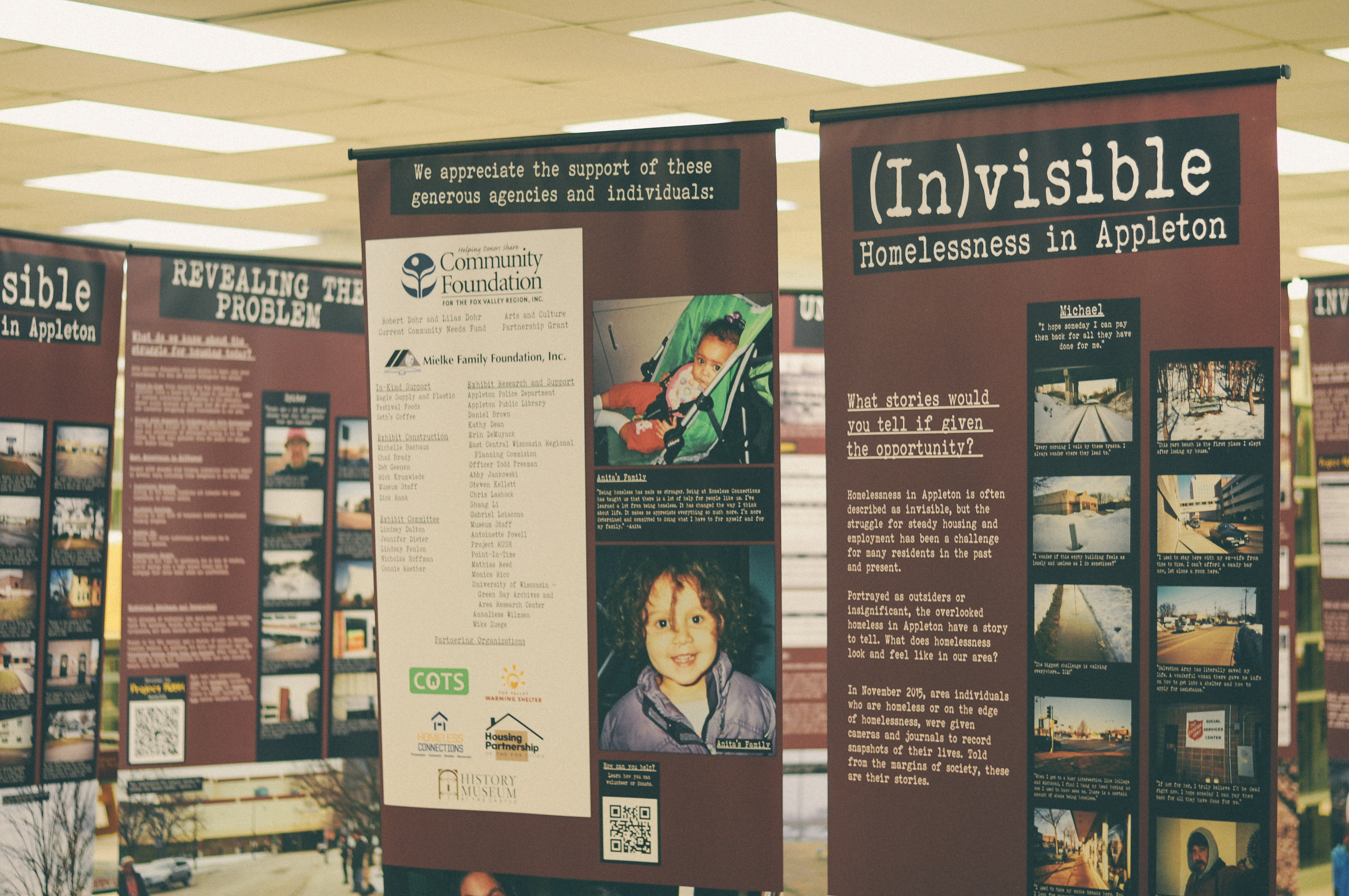 The exhibit is now on display in the Mudd Library.
Photo by Minh Nguyen

Last week on the second floor of the Seeley G. Mudd library was the (In)Visible: Homeless in Appleton Exhibit, a self-guided tour through the past and present of homelessness in the Fox Cities area. A name with two-fold meanings, (In)Visible can be read as “invisible” or “visible.” “Invisible” describes the Appleton Community’s lack of awareness about homelessness, while “Visible” documents the homeless sharing their stories through over 150 photos and journal entries in hopes of having their voices heard in the Appleton community.

The exhibit was put together in a partnership between the History Museum, Homeless Connections, COTS and Project Rush. The Project Rush Steering Committee works with nonprofit organizations such as Warming House, Housing Coalition and Housing Partnership, who also contributed in the collaboration of putting together the exhibit.

COTS Development Director Lindsey Dalton explained, “We wanted to create something that would help dispel stereotypes about homelessness and also give a voice to those experiencing it.” COTS gave individuals participating in the program disposable cameras and asked them to take photos that represented their lives. They were also given photojournals so that they could record their thoughts and feelings about the photos they took. “It was really open-ended in what they decided to do from there, and you definitely see this open-endedness reflected in the exhibit,” said Dalton.

The original idea for the exhibit began small. “I had just planned to have the young adult residents at COTS take photos and then planned to display them at a small event. After speaking with others, the idea grew, and eventually became an amazing partnership between our different organizations!” exclaimed Dalton. Partnering with The History Museum allowed COTS to make the exhibit more impactful and reach more people.

The History Museum’s Chief Curator Nick Hoffman was the project manager, responsible for making sure the exhibit was put together on time. The exhibit was put together from November 2015 to April 2016. Hoffman was also involved in the arrangement of photos, charts and texts. The arrangement and design of the panels were inspired by the work of Vivian Mayor from the Chicago History Museum Project. The goal of the history museum was for the visitors to read the panels at their own pace and start their own conversations and dialogue about the issue homeless people in the community were facing from the past to the present. “It is fascinating to watch how people react as they walk through the exhibits,” remarked Hoffman.

The exhibit used and presented data from Project Rush. This project interviewed 600 homeless people in the Appleton community to bring up issues such as a lack of stability and the struggle of finding housing and employment. Collected in 2015, the data consisted of men and women of different ages categorized into four different living situations. The statistics provided information such as the education and employment of the participants, whether or not they receive healthcare and how long they have been living in the area. Although the statistics do not account for all homeless people in the area including their families, they give a general idea about instability for housing and unemployment and brings it to the attention of the Appleton community.

Executive Director of Homeless Connections Jerome Martin believes there are several reasons why homelessness is an issue in the community. Homelessness is expensive because people who are experiencing homelessness typically consume more public safety services, use more community resources and experience more hospitalizations, incarcerations and institutionalizations. Communities are often judged by how they serve those in need. “It is kind of like the old saying that goes something like, ‘a high tide raises all boats,’” said Martin. As such, through the exhibit, Homeless Connections hopes to show that although the quality of life in the Fox Valley is great, it isn’t great for everyone.

Homelessness is a social justice issue, and having a safe and stable home is a basic human need. “There are people living in poverty and experiencing homelessness that deserve better. No one should be without a place to call home,” said Martin.

“It truly ‘takes a village’ to address these issues!” exclaimed Dalton, “I believe it is our moral duty to have these basic needs met for everyone. It is not just the morally right thing to do, but it also strengthens our entire society to have all of its citizens empowered.”

Lawrentians should be aware that homelessness is happening outside the bubble, even as close as downtown College Avenue. We are also members of the Appleton community and must do our part by continuing the conversations and dialogues surrounding homelessness. The topic of homelessness has been neglected for too long, so it is up to us as a community to be aware of what is going on and bring these stories and voices to light.

The exhibit is now on display in the Mudd Library. Photo by Minh Nguyen Last week on the second floor of the Seeley G. Mudd library was the (In)Visible: Homeless in Appleton Exhibit, a self-guided tour through the past and present of homelessness in the Fox Cities area. A name with two-fold meanings, (In)Visible can…