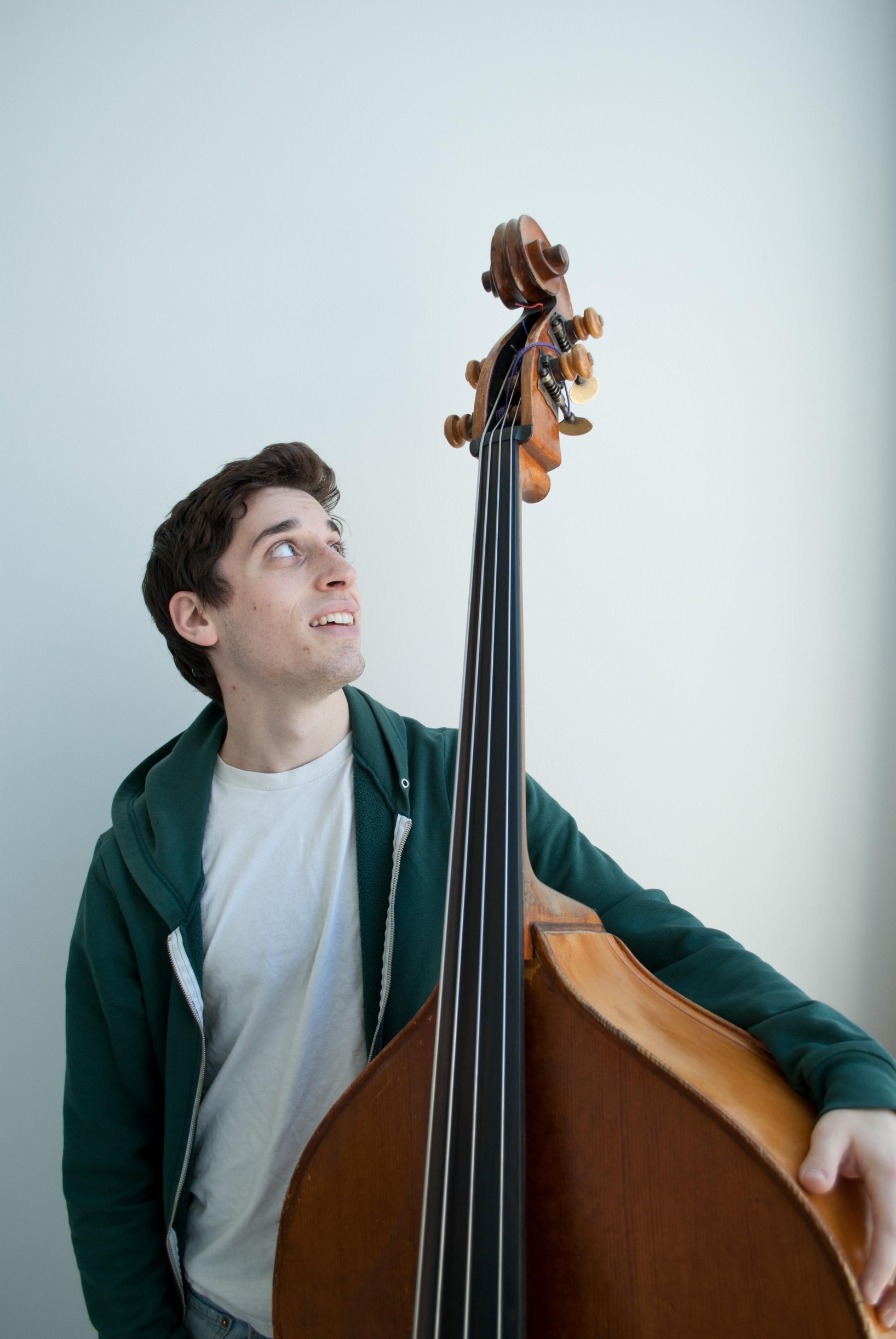 Harrison Keeshin, class of ’13, is a double bass performance major with a jazz emphasis, and he will be letting it all hang out, from his meat-cleaver like classical chops to his tasty bop lines, during his junior recital.

For his classical repertoire, Keeshin will be performing the third movement of the Koussevitzky bass concerto, a very robust and virtuosic selection. He will also be playing a series of three duos with fellow bassist and partner in crime Zach Suechting. The dangerously dynamic duo has been busy preparing selections from composer Thomas Fredrickson.

On the jazzy half of the program, Keeshin will be playing a transcription of the Ellington tune, “I’m Beginning to See the Light.” The version that the transcription is based off of is by the Gerry Mulligan Quartet with Chet Baker. The unusual instrumentation for this number, which includes baritone saxophone, trumpet, bass and drums, will stay the same throughout the recital. Keeshin has also prepared a tune by Thelonius Monk that pays respect to pianist Bud Powell, called “In Walked Bud.”

The piece that Keeshin is most excited to share with his audience is an original tune that he wrote, entitled “New Market Square.” Keeshin studied in Amsterdam during the Fall Term of this past year, and this tune is named after a place a half of a mile from his apartment there. “The song has a strong sense of tension and release,” says Keeshin. “I would go [to New Market Square] to blow off some steam and just chill out. The place captures a lot of my memories of Amsterdam: hard times followed by good times.”

In writing and arranging this tune, Keeshin drew inspiration from Reid Anderson’s album “Vastness of Space.” “The alto and tenor saxes have a really cool sound together, and that instrumentation and their harmony inspired me,” Keeshin reflected.

In having his own vision for a tune, Keeshin has had to advise his fellow musicians as to how to approach the piece to get it to sound just right. This is the first time that Keeshin has written and arranged a tune that he has brought to a group. He has learned that it is sometimes hard to articulate exactly what is going on in your head. Also, being a bandleader is something that is not inherent in Keeshin’s nature. “I want to hear what other people want to say,” Keeshin notes.

Keeshin was very thoughtful about all of the repertoire that he decided to include. For the classical rep, he knew what kinds of styles he wanted to play. Similarly, in choosing his jazz rep, he was looking for a very specific kind of sound. The effect will be a carefully-crafted and nuanced program.

As those of you who have had to put a recital together know, it is no easy task. Among some of the challenges for Keeshin have been staying focused in practicing all of the same material time and time again, as well as putting rehearsals together with the busy Lawrentians’ schedules to reckon with. Along with that, this is Keeshin’s first time writing and arranging a tune for a group.

In having his own vision for a tune, Keeshin has had to advise his fellow musicians as to how to approach the piece to get it to sound just right. Sometimes it’s hard to articulate exactly what is going on in your head. Also, being a bandleader is something that is not inherent in Keeshin’s nature. “I want to hear what other people want to say,” Keeshin noted.

This has overall been a rewarding process for Keeshin. “It’s been a good experience to put this recital together,” he said. “I would do some things differently in the future, but I don’t have any regrets. I’m happy with everything on the program.”

In addition to his junior recital, Keeshin has been working on some other projects around campus, including Sarah 2 and the High School Varsity Athletes, and a Jazz Trio with percussionist Tristan Renfrow and guitarist J.P. Merz. Keeshin wants to try to play as much jazz as possible in the upcoming year and beyond.

Be sure to make Keeshin’s recital on April 28 at 11 a.m. in Harper Hall. Keeshin commented that although it is early for those late night swingers, “There will be bagels.”