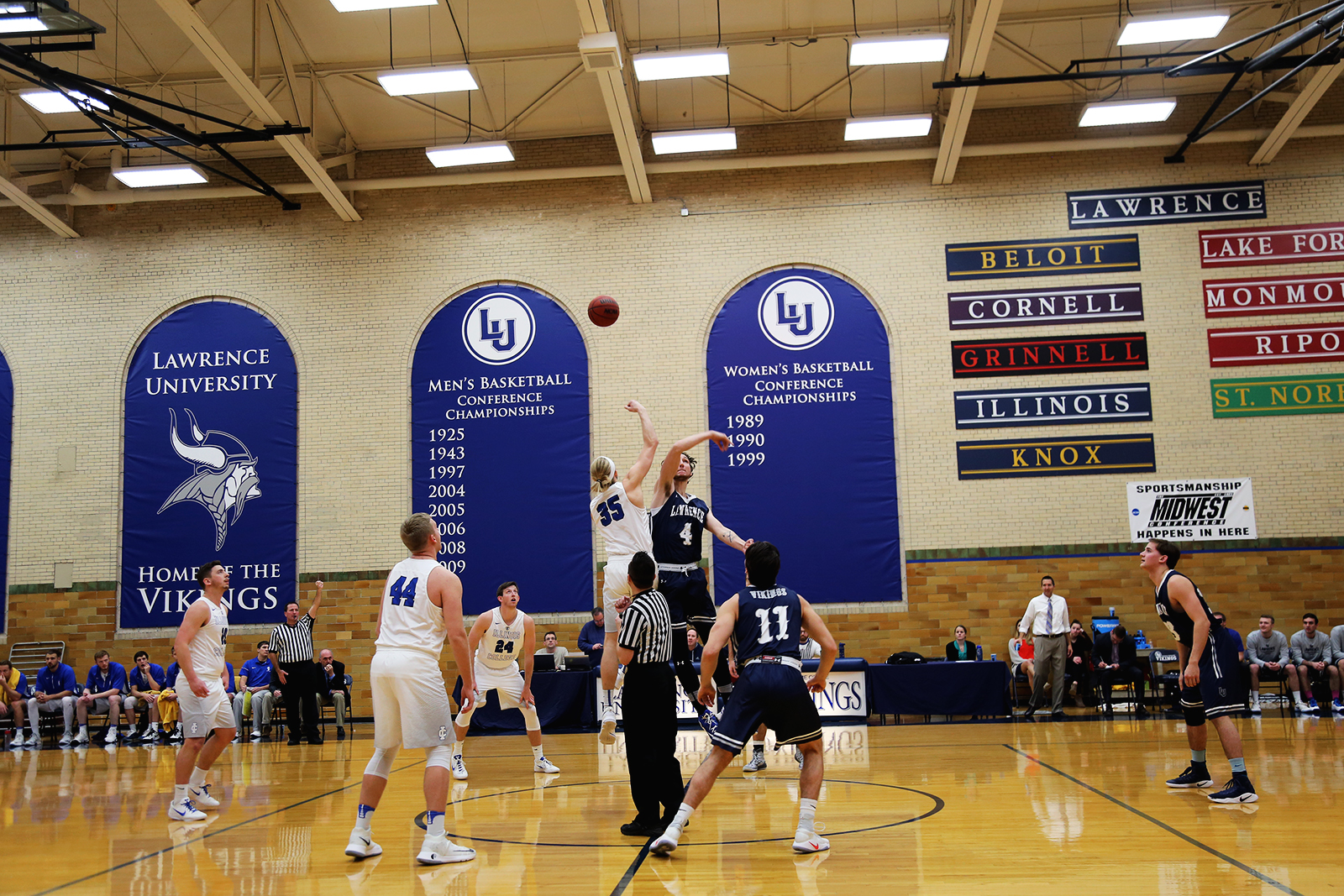 Tip off against Illinois college.

This past weekend, the Lawrence’s Men’s and Women’s Basketball teams played home games against Cornell College and Illinois College. The Lady Vikes lost 2-11 and 0-8 overall in the Midwest Conference (MWC), while the men’s team won 6-6 overall and 6-2 in the MWC.

The Lady Vikes had a difficult time keeping pace on Friday with Cornell, who have won 9-3 overall and 7-0 in the MWC. They scored the first eight points of the game, while the Vikings did not score until there was 4:30 left in the first quarter. At the end of the first quarter, after a stunning 30-foot 3-pointer from junior Nicole Cummins, the Vikes were still down 17-5. The team attempted to keep pace with Cornell during the second quarter, but Cornell pulled ahead to lead with 35-17 at the half. Cornell opened with a strong second half on a 12-2 run. Cornell eventually won the game 80-41. Cornell senior Sierra Bisso led the team with 17 points, while freshman Anne Visser added 16 points. The Vikes’ freshman Shonell Benjamin, led the team with eight points and 10 rebounds, which was a game-high for her. Senior Aubrey Scott added another seven points and six rebounds for Lawrence.

On Saturday, the team again took the court, this time against Illinois College, 9-4 overall and 6-2 in the MWC. The Vikes held a close first half, but could not keep up with Illinois College. Illinois led at the end of the first quarter 29-18, with the help of a jumper from Scott, and the Vikes were able to cut the lead to 29-21 due to junior Olivia Hoesley opening the second quarter with a 3-pointer. Sophomore Leah Reeves, was able to cut the lead again to 31-25 with 31-25 with 6:41 left in the second quarter. Illinois led 47-30 going into the second half. As the game progressed, Illinois’ lead steadily grew to 83-44 to close out the game. Reeves paced the Vikes with 12 points and seven rebounds. Hoesley added 11 points while Scott had eight rebounds, a game high for her. 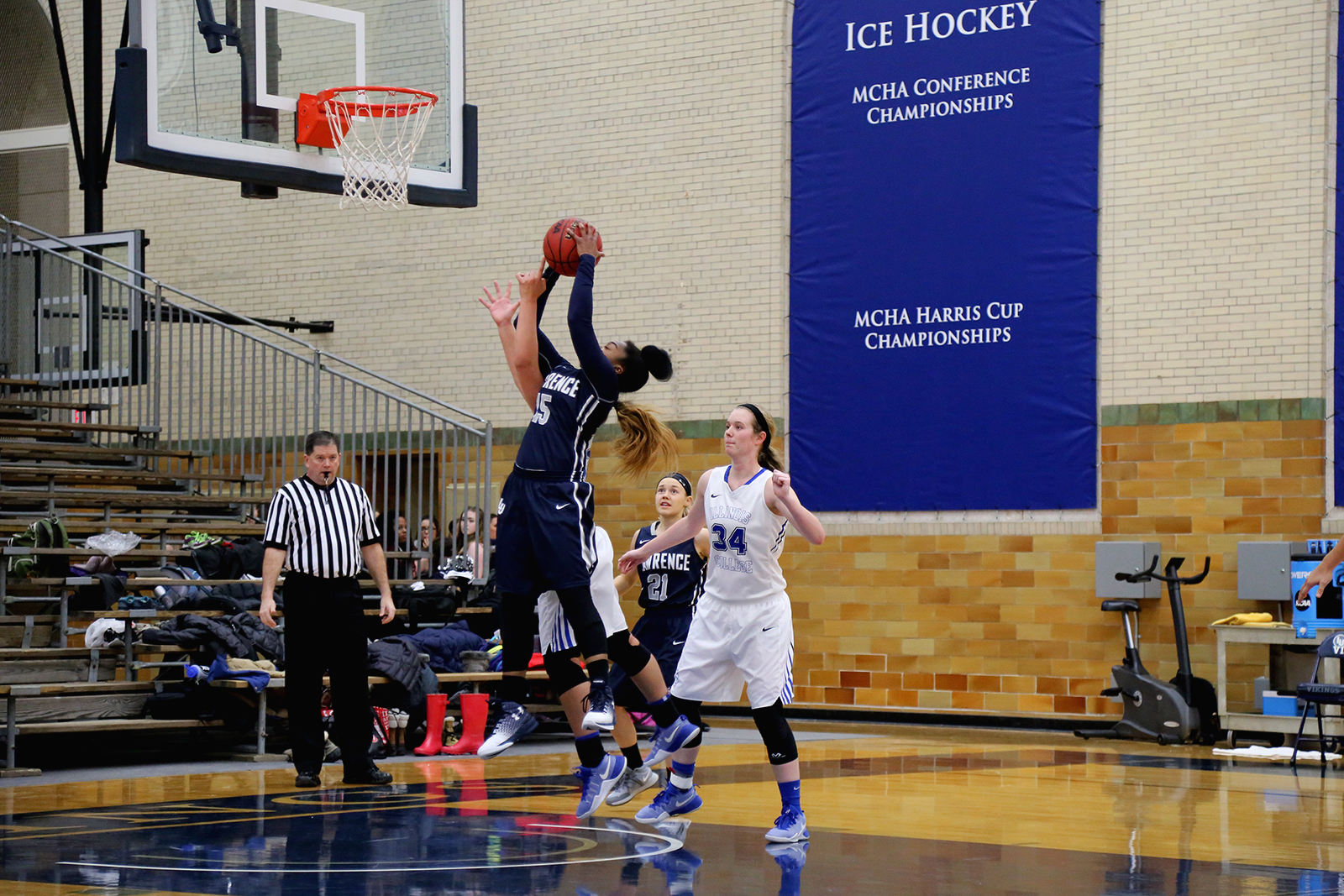 Lawrence Drives to the rim past Illinois’ defenders.
Photos by Victor Nguyen

On Friday, the men’s team had a close game against Cornell, 5-7 overall and 3-4 in the MWC. Cornell led for the first half of the period and rallied with the Vikings for the remainder of the first half before coming out on top with 28-27. The Vikings were trailing with 13 minutes left in the second half, 39-33, before senior Pete Winslow scored two 3-pointers back-to-back to tie the game. A layup from Winslow gave the Vikings their first lead since the first half, 41-39. After losing the lead, junior Jeremy Stephani, scored back-to-back 3-pointers to take the lead again, 47-43 with 7:05 remaining in the game. Cornell was able to tie the game up again, before the Vikings were able to pull away from Cornell and win the game 58-51. Winslow led the Vikings with a team-high of 19 points. Junior Ben Peterson added 12 points, while Stephani added eight and senior Connor Weas, had seven.

On Saturday, the men also faced Illinois, 3-10 overall and 0-8 in the MWC. The Vikings struggled in the first half and ended up behind at the end of the first half 30-20. They were able to pick it back up in the second half. The Vikings went on a 21-6 run over Illinois in the first five minutes of the second, making the game 41-36. With 11:26 left, Illinois tied the game up, 43-43. As Illinois started to miss more opportunities and commit turnovers, the Vikings pulled away and finished the game off 63-54. Stephani led the team with 23 points and six rebounds and Winslow added 17 points which helped the Vikings win. The Vikings went 16-22 from the line which helped immensely in the final minute of the game.

With the season ending in less than a month, both the men’s and women’s teams are looking to continue improving and finish the season strong. Both teams will play against Beloit College on Jan. 21 and will return home on the 25 to play against St. Norbert College.

This past weekend, the Lawrence’s Men’s and Women’s Basketball teams played home games against Cornell College and Illinois College. The Lady Vikes lost 2-11 and 0-8 overall in the Midwest Conference (MWC), while the men’s team won 6-6 overall and 6-2 in the MWC. The Lady Vikes had a difficult time keeping pace on…