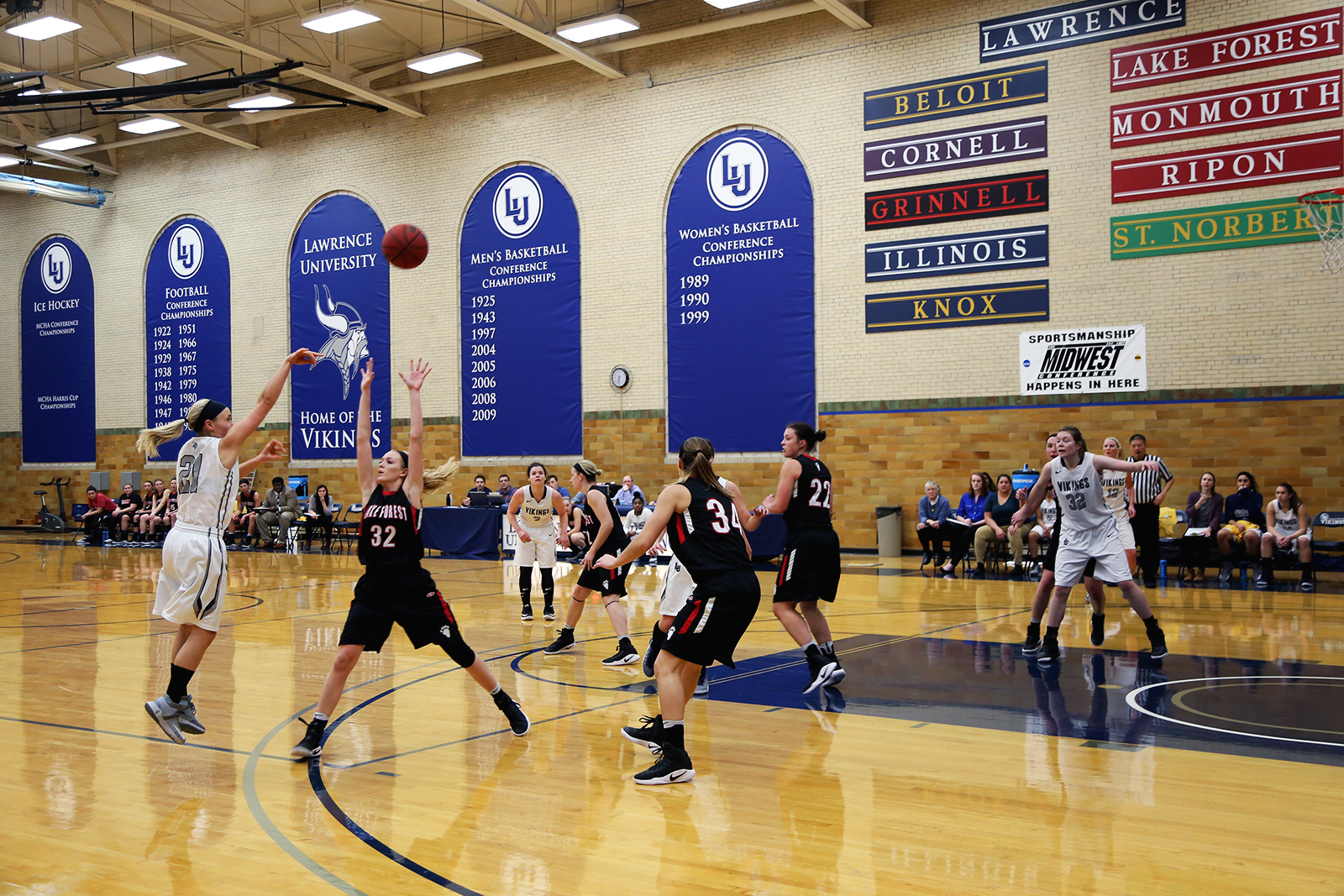 For the three!
Photo by Victor Nguyen

With the season ending in less than a month, both the Men’s and Women’s basketball teams are all expected to have positive results to finish the season strong. The Viking men are now 6-6 overall and 6-2 in the MWC (Midwest Conference), standing high at third place on the MWC standings, while the Lady Vikes have a losing record of 2-11 overall and 0-8 in the MWC. However, both teams fell short at home against Lake Forest College (3-10 overall, 2-6 MWC) on Wednesday night, Jan. 18.

With a high-spirited determination before the game started, the Lady Vikes came into the game ready to win. The game began with six points by the Foresters. To win the early lead, the Vikings scored seven consecutive points with three by sophomore Leah Reeves. The Lady Vikes kept the seesaw battle for the rest of the first quarter, including four instances when the game was tied before freshman Shonell Benjamin did a layup within last 20 seconds to finish the first quarter with a two-point lead for the Vikings, 17-15.

Despite being behind by six points early in the game, the Vikings did not fare well in the second quarter. The Foresters flared up strong with many solid shots to score 13 consecutive points in the first seven minutes of the second quarter while the Lady Vikes could not find their way to the basket. A layup by Reeves helped the team to stop the run, but they were still down nine points three minutes before the first half ended. The Lady Vikes’ shooting went cold, extending the lead of the Lake Forest to 12. Reeves rescued the team with a two-point buzzer beater to tighten the deficit to 31-21 Foresters at the half.

The Lady Vikes put on a wonderful fighting spirit and went 7-0 at the start of the third quarter, hyping the audience at the Alexander Gym. Lauren Deveikis added a jumper and Reeves kept her high spirit with another four points, bringing the game to a three-point difference, 31-28 Foresters. After that, Deveikis successfully shot a clean three, but these were the last points from the Lady Vikes in the third.

The fourth quarter belonged to the Foresters as they continued to extend their lead and finished the game with a final score of 61-39.

Over the course of the game, Reeves paced the Lady Vikes with 15 points and 8 rebounds. Deveikis came close with 11 points and Aubrey Scott had a game-high four assists.

The Viking men followed the women’s game, also taking on Lake Forest (7-6 overall, 5-3 MWC). The Foresters stood right behind the Vikings on the MWC standings separated by only one win. Therefore, the result of this game could affect the participation in the Tournament for the Vikes because of their many tough games ahead.

Both teams traded baskets in the first seven minutes of the game, but the Vikings were slightly behind with a score of 7-11. Two players from Lake Forest, Eric Porter and Mike Ruffer, brought up two clutch threes and extended the lead to six when the timer reached 10 minutes. However, senior Mitch Willer and junior Jeremy Stephani added three back-to-back layups for Lawrence, narrowing the gap down to 25-28, with only 2:40 left in the half. The Vikings continued with high spirits and tied the game 37-37 at the end of the first half. Stephani and sophomore Quinn Fisher contributed three three-pointers, while senior Mitch Miller scored nine points for the Vikes.

Lake Forest had strong start at the second half, scoring seven consecutive points before the Vikings flared up and tied the game at 44-44 off of senior Evan McLaughlin’s first career three-pointer. Unfortunately, that was the last three-pointer for the Vikings in this game. After two points by the Foresters, Stephani tied the game for the fifth time with a layup. At this point, The Vikings slumped into a cold shooting period. The Foresters extended the lead to 56-46, including two three-pointers, while the Vikings could not find a way to the basket.

Stephani shot two free throws and cut the lead into 57-50. Lake Forest went nine for 10 free throws at the end of the game, while the Vikings missed four free throws with only 1:30 left. The game ended and Lake Forest College defeated Lawrence University 66-53.

Over the course of the game, the Vikings struggled completing three pointers. Stephani, the Vikings’s best three-pointer shooter, did not have a great day. He and his teammate missed four consecutive three-pointers attempts. Lawrence only went 4-21 beyond the arc, making it difficult to close the gap between the Vikings and the Foresters.

Miller led the Vikings with 18 points and nine rebounds, Stephani contributed 14 points and senior Eric Weiss added a game-high five assists. After the match, the Foresters tied with Lawrence in the MWC standings (6-3). This result makes it necessary for the Viking men to win most of the remaining games in order to qualify for the conference tournament, including two games against Ripon (second in MWC standings) and one game against St. Robert (first in MWC standings). It is a tough journey ahead but best of luck to the Vikings!