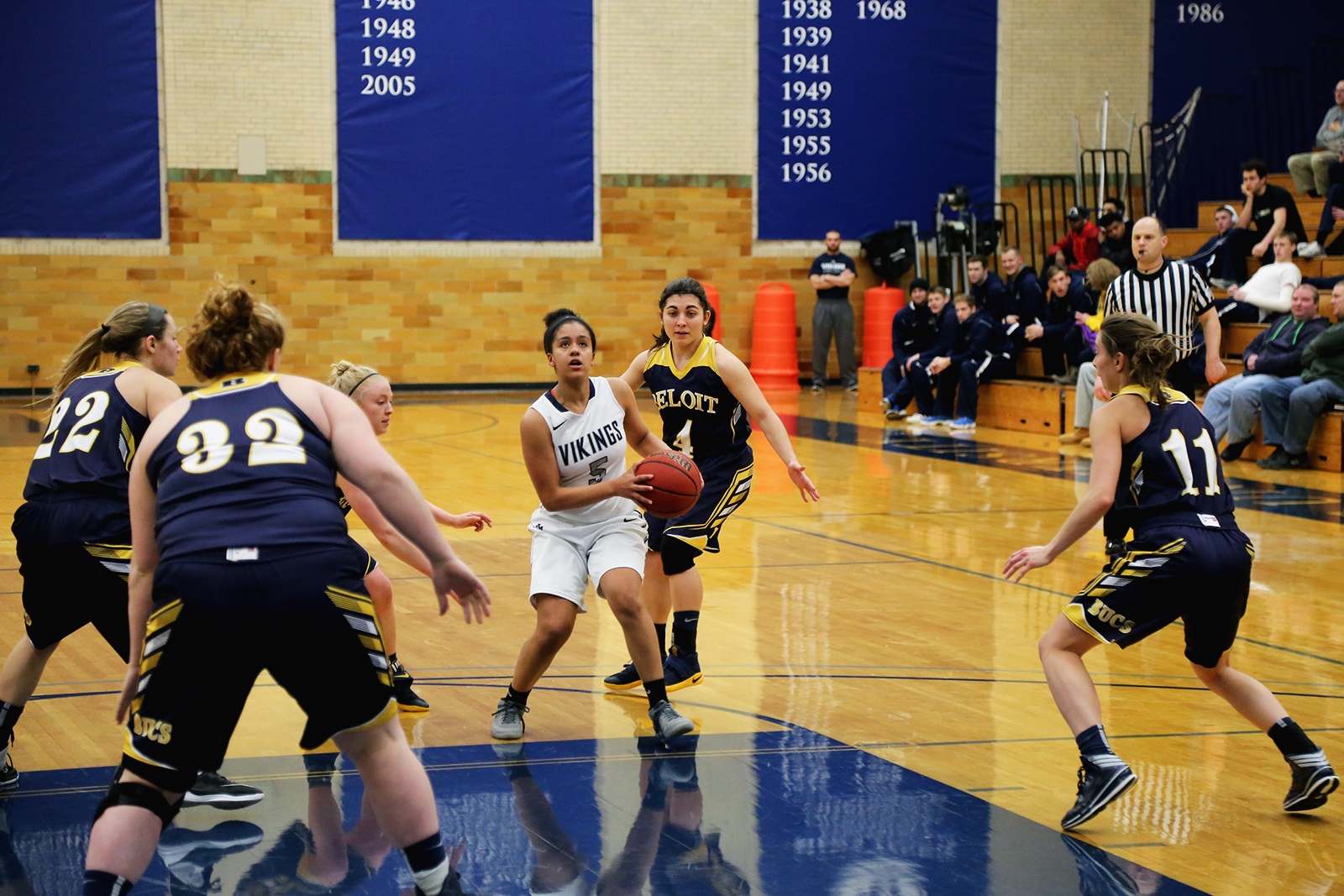 There are only five games left until the Midwest Conference tournament starts, and only the top four teams can join the tournament. Following the Vikings’ loss at Cornell on Tuesday, January 31st, the men’s basketball team was standing in fifth place in the conference, one win behind Grinnell. Therefore, the team’s win against Beloit College on Saturday, February 4th was really important to improve the Vikings’ chance of getting into the final tournament. With a high-spirited determination, the Viking men seized the 101-67 victory with a combined 18 three-pointers from both sides.

Both team traded baskets in the first three minutes of the first half, however three failed shots left the Vikings behind by two. Then, two consecutive three-pointers from juniors Jeremy Stephani and Ben Peterson stopped the seesaw battle and put the Vikings into the lead. The next five minutes were a one-sided show from Lawrence University. The team extended the lead to 15 points, making the score 21-6. This was a solid start for the Vikings. The team was carried by their three point shots—four out of six shots beyond the arc, including two by Stephani and two by Peterson.

The atmosphere in the Alexander Gym became even hotter when the Vikings pushed the lead to a 20-point difference at 34-14 with a clutch three point shot by senior Connor Weas. Beloit managed to narrow the gap to 43-28 in the last minute of the first half, but it could not end the hot shooting day of the Vikes. Junior Ben Peterson continued making sharp threes, following by one more point from the free throw line. Freshman Quinn Fisher closed the first half with a beautiful layup at the buzzer to seize the score 53-32. This is the first time Lawrence scored more than 50 points in the first half in the 2016-2017 season.

Peterson kept adding more three-pointers at the beginning of the second half, contributing three in eight shots beyond the arc for the Vikings. After only seven minutes of play, the Vikings had a 30-point lead, crushing the hope of Beloit College. Stephani and freshman Abhishek Venkatesh successfully drove two consecutive layups to finish a 13-4 run. The Vikings scored 39 more points in the last thirteen minutes, while Beloit only responded with 28. The final buzzer blew and the Vikings seized a 101-67 victory against Beloit College.

Peterson led the team with 25 points, including eight out of ten beyond the arc. Jeremy Stephani got close with 19 points, while Mclaughlin reached his career high of seven assists.

In contrast of the Viking men’s performance, the Lady Vikes fell 64-40 to Beloit College. Before this match, many injuries, including senior Aubrey Scott and junior Natalie Kramer during the match versus Cornell had predicted a harsh time ahead for the Lady Vikes. In the Midwest Conference Standings, Beloit College stood higher than Lawrence with three more wins. History also favors Beloit in that they hold a 37-28 advantage over the Vikings, and have won the last 17 meetings.

The first quarter went well for the Viking women when they were only down by eight. However, Melissa McLean and Shelby Kline from Beloit College successfully shot four consecutive baskets, including one three by Shelby, to extend the lead by 14 at half time, with the score 30-16.

The third quarter was a nightmare for the Vikings. The team only scored two out of eleven shots while also giving up four turnovers. Through this slump, McLean scored five points for the Buccaneers, while Kline also contributed four.

The Lawrence women did not surrender and maintained their fighting spirit with a 10-3 run at the start of the fourth quarter, including two three-pointers by Kramer and junior Lauren Deveikis. However, the Buccaneers’ 23-point lead was too huge, especially with only four minutes left in the game. The Lady Vikes could not narrow the gap and were defeated with the final score 64-40.

Kramer was still the best shooter of the Vikings with 13 points in this match, including two three-pointers. In points scored, Kramer was followed by Deveikis and junior Olivia Hoesley with seven points each.

In the run at the Midwest Conference tournament there is still hope for the Viking men’s team. They are now tied with Grinnell in the fourth place in the Midwest Conference (MWC) standings, but have one more game than Grinnell left to play. The team has to stay focused and take the schedule one game at a time. Every win is essential, but only one loss can crash the 2016-2017 tournament dream instantly. Best wishes for the Vikes!

Photo by Victor Nguyen   There are only five games left until the Midwest Conference tournament starts, and only the top four teams can join the tournament. Following the Vikings’ loss at Cornell on Tuesday, January 31st, the men’s basketball team was standing in fifth place in the conference, one win behind Grinnell. Therefore, the…