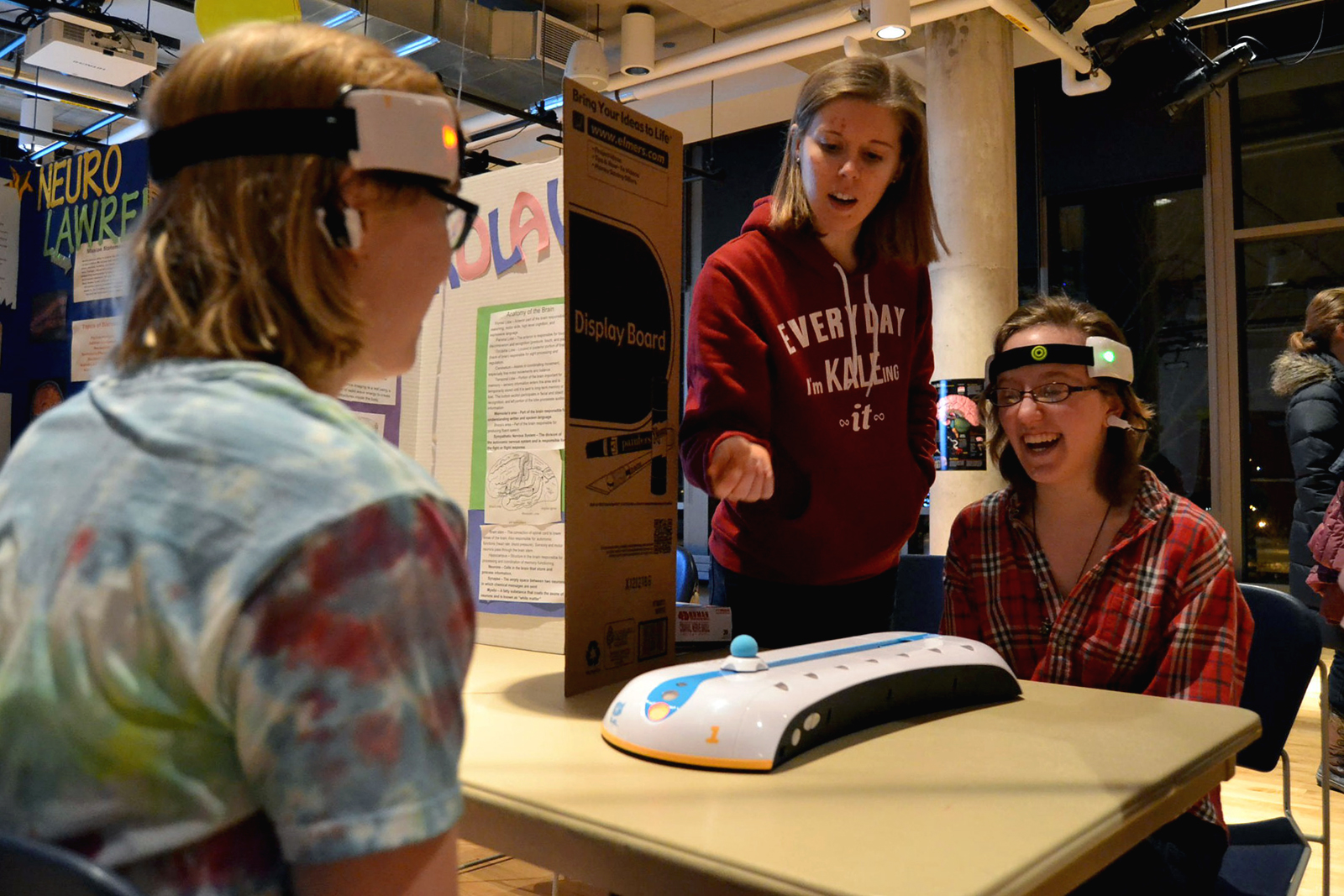 Lawrentians experiment with telekinesis at the science colloquium.
Photo by Emily Midyette

On Friday, Feb. 3, at 6:30 p.m. the annual Science Colloquium, titled the “Cerebral Celebration,” was held in the Esch Hurvis Studio in the Warch Campus Center. There were eight to ten booths, each representing a different branch of science: electromagnetism, physics, chemistry, neuroscience and one dedicated specifically to women in the scientific fields. All of the booths had an interactive element for attendees to participate in.

At the back of the room, a game of science-themed Jeopardy! started at 7 p.m. A long table held possible prizes participants could win, including a laser pointer and a circuit set.

“You get more raffle tickets by answering Jeopardy! questions correctly,” explained junior Aedan Gardill, who was minding the front table to the entrance and handing out everyone’s first free raffle ticket.

The chemistry table had three mini-experiments dealing with the sense of taste. There was a bowl of cilantro, which tastes soapy to some people due to genetic factors and the fact that many of the compounds in soap are found in cilantro. Attendees could test whether or not they were a “super taster” a “medium taster” or a “poor taster.” The results of the test were dependent on how many palates the test-takers had, which could be determined by dabbing blue food-coloring on their tongue.

The third experiment involved “magic berries” and lemons, which was also a tasting test. Students would eat a “magic berry” that would bind to certain receptors on their taste buds then taste food and find that typically sour things tasted sweet.

“This is the first time we’re doing this,” said junior and event organizer Cheyenne Beckelman, who was managing the “Women in Science” table. “But we hope to make this an annual thing, with different themes. The theme this year is the brain.”

At the “Women in Science” table, there was a display of ten different women who significantly impacted science discovery throughout history. There was also a matching quiz to fill out, which helped prepare students for the Jeopardy! questions. Candy was the reward for getting most of the questions correct.

At the neuroscience table, attendees could play a game in which two people wore headsets that wrapped around their foreheads and allowed the wearers to telekinetically make a ball move across a plastic board. The students running the table explained that the game worked by monitoring brainwaves.

The physics table had plastic circuit parts, which were used for building. At the electromagnetic table there was a setup of LED lights, which had to be manually cranked, an electrified metal cylindrical object in which different thicknesses of metal rings could be placed and used to create its own magnetic field as well as a box that showed the inside of a computer.

Lawrentians experiment with telekinesis at the science colloquium. Photo by Emily Midyette   On Friday, Feb. 3, at 6:30 p.m. the annual Science Colloquium, titled the “Cerebral Celebration,” was held in the Esch Hurvis Studio in the Warch Campus Center. There were eight to ten booths, each representing a different branch of science: electromagnetism, physics,…