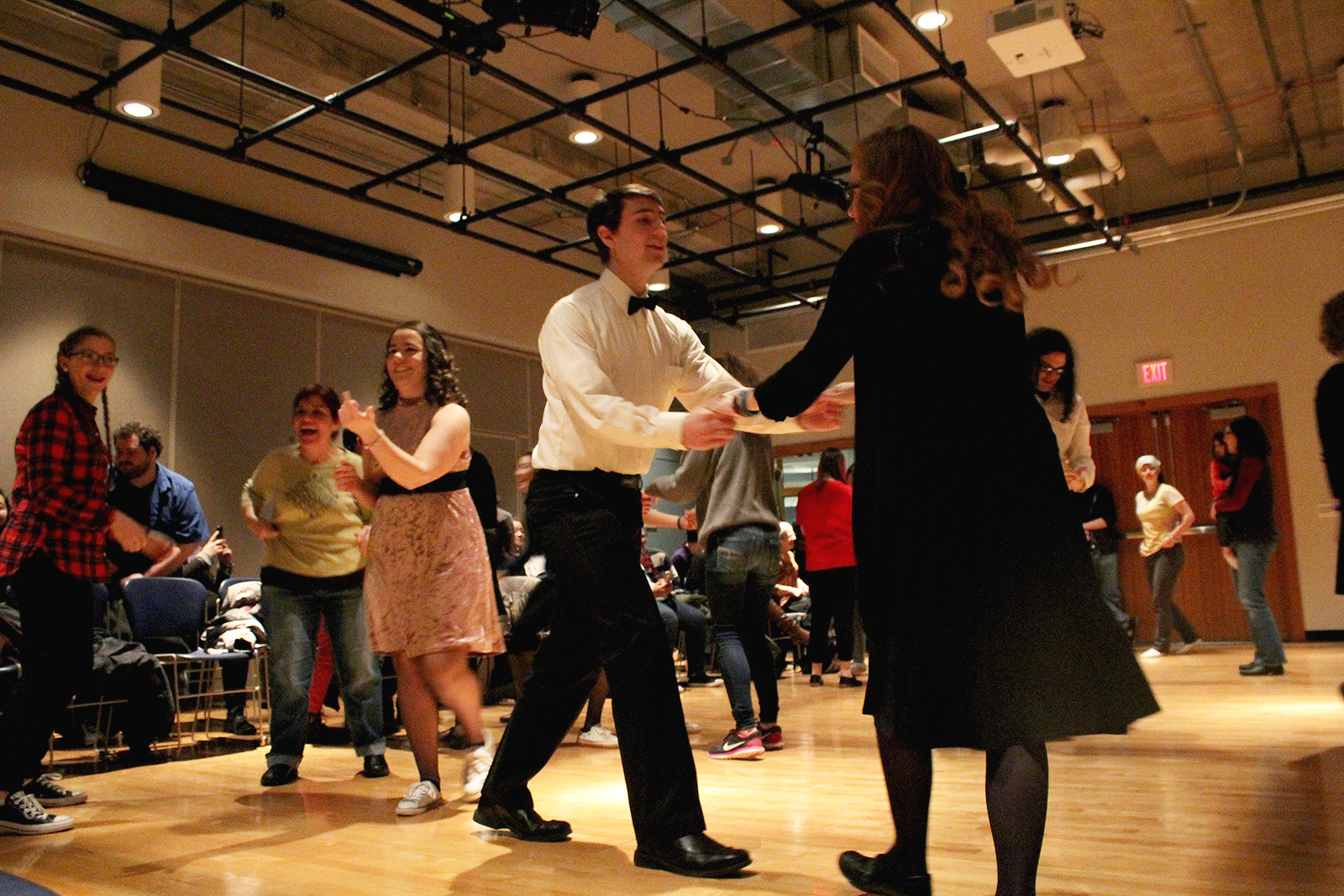 LSD hosted a free dance for members of the audience after the performance.
Photo by Allegra Taylor

On Feb. 4, Lawrence Swing Dance (LSD) put on their annual “Dancing with the Profs” event. Students and professors jointly presented their choreographed dances in Esch Hurvis Studio in the Warch Campus Center. Students, professors and their families filled the room and enjoyed the amusing mix of jazzy music and swing dance.

“Dancing with the Profs” has remained LSD’s most popular event ever since the club’s founding nearly 15 years ago. The event serves to raise donations for Heifer International, an organization that distributes livestock including chickens, bees and goats to families all over the world. Each person was encouraged to donate $5 before entrance to carry on this fundraising project.

Different pairs of professors and students have performed dances every Winter Term. Regardless of prior dancing experience, nominated professors are encouraged to join the event and work one-on-one with dancers and choreographers for three weeks. This year, LSD selected six top nominations including both Conservatory and college professors.

Junior and president of LSD Maralee Mindock explained that having different types of professors “brings [a] different audience so that the club can reach a wider audience we might not normally have met.”

The event involved three ten-minute-long dance pieces, each one featuring both a professor and a student. Following brief introductions by the emcees, Visiting Assistant Professor of Biology Eric Lewellyn and senior Morgan Edwards-Fligner performed in their lab coats. The aptly selected music, titled “She Blinded Me with Science” by Thomas Dolby, particularly highlighted the sprightly combination of science and swing dance.

Associate Professor of Music Michael Mizrahi and Mindock exhibited their romantic dance moves next, in time to Michael Buble’s “L-O-V-E.” The final dance performance with the lively song “Dancing Queen” by ABBA was performed by Instructor of Music Donna DiBella and senior Maddy Brotherton.

Mizrahi expressed his excitement for this new challenge of swing dance. “It’s my first time really doing any kind of swing dance at all so [LSD members] had to teach me the most basic moves. All of the dance practices were a nice escape from everyday life,” he said.

All the dancers received awards at the end of the night. Assistant Professor of Philosophy Mark Phelan, who was a dancer at last year’s event, judged the performance with assistants. The award for “Crowd Favorite” went to Lewellyn’s fast-paced Charleston, “Fanciest Footwork” to Mizrahi and “Most Musical” to Dibella.

Following the awards, the emcees immediately encouraged everyone to join the social dance and mingle in. “We love doing this event because it gets faculty involved. It’s a lot of fun just to have people come together and enjoy dancing and just some ‘silliness,’” said five-year double-degree student Sarah Nelson. As the former president of LSD and the residence life manager (RLM) of Swing House, she still remains an active part of the club.

“It’s a very chill and relaxing environment where you don’t have to dance and can just come and enjoy the dancing. We make it a community event where you can come and observe but can also be a part of community,” Mindock added.

LSD hosted a free dance for members of the audience after the performance. Photo by Allegra Taylor   On Feb. 4, Lawrence Swing Dance (LSD) put on their annual “Dancing with the Profs” event. Students and professors jointly presented their choreographed dances in Esch Hurvis Studio in the Warch Campus Center. Students, professors and their…