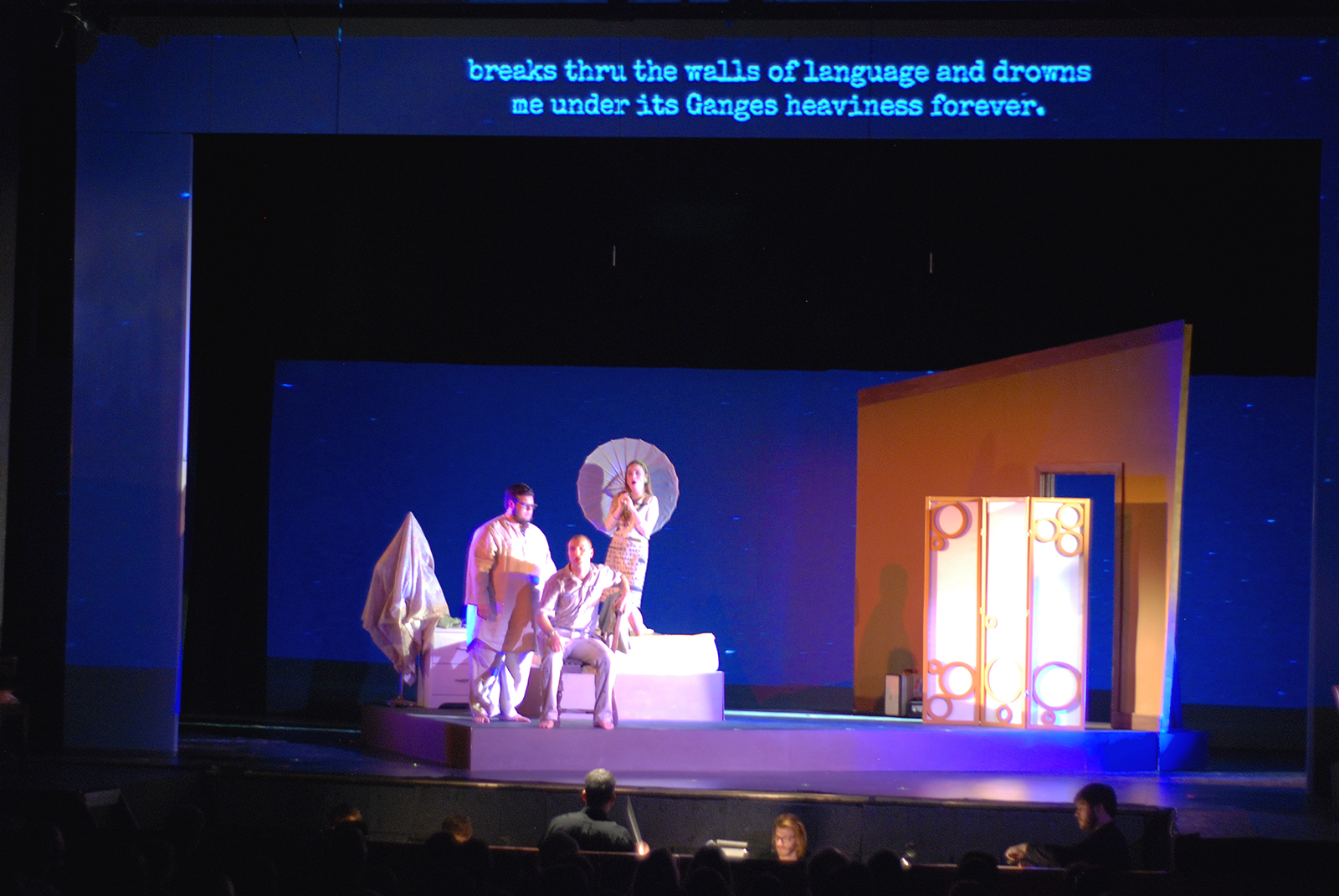 Lawrence students perform in the opera “Hydrogen Jukebox” in Stansbury Theatre.
Photo by Hikari Mine

This year’s main stage opera was “Hydrogen Jukebox,” the collaboration between minimalist composer Philip Glass and Beat poet Allen Ginsberg. Director of Opera Studies and Associate Professor of Music Copeland Woodruff led the dedicated group of singers and musicians as well as a stellar design team, collaborating as much as he could with them to create a powerful joint vision. “Hydrogen Jukebox” ran from Thursday, Feb. 16 to Sunday, Feb. 19, featuring alternating casts, and while I was not able to see both casts, the one I did see on Friday hugely impacted me. Intensely engaged throughout, my sense of time washed away, and I constantly felt a mix of inspiration, love and comfort throughout its duration that felt both like a few minutes and an eternity.

Beginning gently with a sense a foreboding, a motel room showed itself on stage with sharp lines and angles outlining the two bodies that lay in its bed. The simplistic set accentuated the flickering lightning that baritone and sophomore Erik Nordstrom sang of, and the solemn atmosphere clouded the set and its other inhabitants—senior Jacob Dalton as Ginsberg and two clusters of people cloaked in white shrouds on either side at the edges of the stage.

The high point of the show came at #10, “from Wichita Vortex Sutra.” Driving to the essence of the entire opera, it stood out in ways beyond its stripped down nature. #10 was simple—as Dalton recited several minutes of poetry, junior Jake Victor provided piano accompaniment onstage and in costume. Playing eclectic minimalism rooted in gospel and folk, Victor gave plenty of room for Dalton to deliver a spirited rendition of the poem with a focused care, causing my eyes to well up. Ginsberg’s poetry is dense, demanding thoughtful analysis—and this was no exception—but Dalton’s performance instilled it with a bright, accessible feeling that gave the poem a strong power regardless of how much was initially understood.

The following song—#11, “from Howl”—put the focus back on the vocalists as well as another pit musician to grace the stage, senior Sam Pratt on tenor saxophone. This number featured a much different kind of intensity—as frantic typewriter clacks pierced the air, Pratt soloed freely against the forcible vocalists. He was incorporated into the staging too, battling the ensemble by leading them to first engulf him and take his saxophone, and then to towering above them, filling the room with polyphonic screams.

From his previous performances in various groups, I knew Pratt was a force to be reckoned with but the six vocalists certainly held their own during #11 and the rest of the opera. Seniors Froya Olson and Madelyn Luna as first and second soprano, respectively; mezzo-soprano and sophomore Clover Austin-Muehleck; sophomore and tenor Luke Honeck; Nordstrom and senior and bass John Perkins all brought their well-crafted and sensitive interpretations to the show, creating a vibrant performance that I favored over the 1993 recording of the original six vocalists. Later, I learned their deep understanding came from spending so much time with the music and libretto—mainly over D-term—and was frequently built up alongside emotional conversations of philosophy, current events and more. I learned all these details at the talkback following, but it all shone clearly throughout the performance.

What also made this particular production of “Hydrogen Jukebox” different from all others was its use of video throughout. While not in the stage directions at all, Woodruff reached out to alum Mathias Reed ’14 and had him stitch together footage of Ginsberg and historical events, pairing them with the text projected at the top of the set. Many of the clips gave something more concrete for the audience to hold onto and further showed the communal insight and interpretation everyone involved had of the rich music and libretto that they were so devoted to share.

The rest of the pit not featured onstage was mesmerizing from start to finish. The perfect backdrop for the abstract and dreamy vocals, the instrumental ensemble grounded me while still allowing for a transfixed focus on everything else that was going on sonically and visually. I have been a fan of Glass’ instrumental music for a few years now, but being able to see and hear how his minimalism interacts with vocalists live—especially with such attentiveness—was a rare treat.

I deeply apologize if you missed seeing this opera. The fact that this production of it—done this particular way with such a brilliant cast, pit, design team and director—will not ever happen again cannot be sugarcoated. The amount of compassion and honesty put into “Hydrogen Jukebox”—across all mediums and artists involved—has set quite the standard for future operas, concerts and all other arts here. I cannot wait to see how it has inspired all of its audiences.