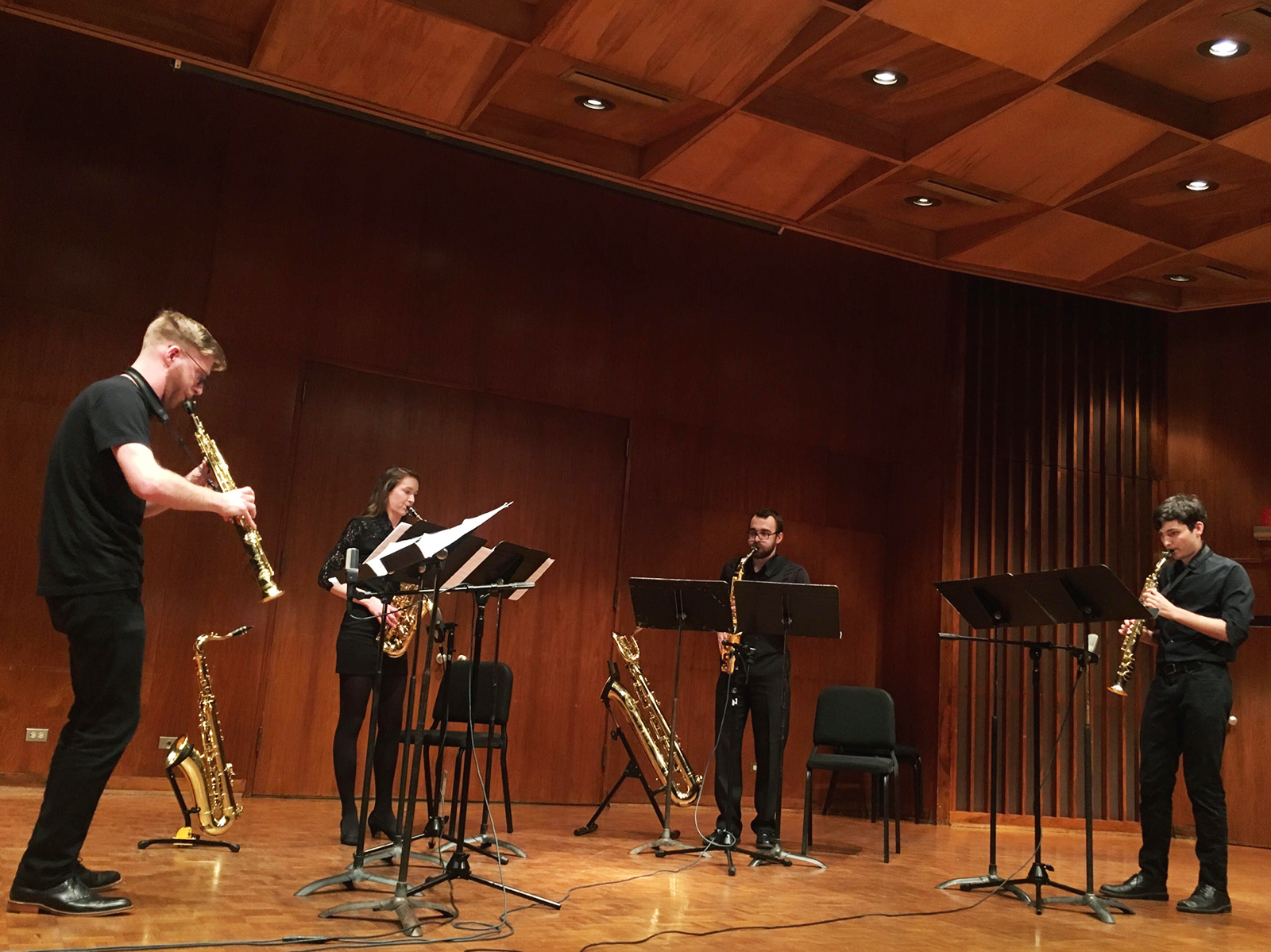 Lawrence students and faculty perform in the “The Music of Marcos Balter and Stacey Garrop” from the New Music Series.
Photo by Kiran Mufty

On Sunday, Feb. 19, a concert entitled “The Music of Marcos Balter and Stacy Garrop” was held in Harper Hall. Part of the New Music Series, this concert was a saxophone and composition collaboration project. Lawrence University students and faculty performed the music of these two composers, which made for a very exciting night of innovative music.

After Balter and Garrop briefly introduced their compositions, the first song, written by Balter, began. “Intercepting a Shivery Light” featured a saxophone quartet and consisted of a steady and repeated rhythm throughout. The musicians rocked back and forth expressively with the pulse of the rhythm; the motion was hypnotic. The piece ended very abruptly, and the quartet left the stage. One of the members of the quartet, Instructor of Music Sumner Truax, was featured on two of the other pieces during this recital; it is always a pleasure to hear him perform.

Another Balter composition, “Wicker Park,” was played on soprano saxophone by senior Jack Breen. Earlier in the year, this piece was played by Sumner Truax. Having attended that recital, it was engrossing to see another different musician take on this elaborate piece. This song, as well as the others, employed the techniques of toneless wind and circular breathing. Interestingly, most of the concert consisted of musicians not fully producing sound on their instrument.

The first Garrop piece of the night, “Stubborn as Hell,” was a loud and percussive song in which the saxophone duet often personified two people fighting. This back-and-forth bickering interchange had clashing sounds that were often hard to listen to—but it was intended to be this way. After a middle section that was contrastingly soft and gentle, the piece ended in the same aggressive manner in which it had begun.

“Strohbass,” by Balter, featured a duet by Assistant Professor of Music Erin Lesser and senior Gabe Peterson. Lesser played the bass flute, a rare instrument with an unusual sound. Many extended techniques were used in this piece, including slap tongue. The rhythms and staccato were intricate and strange, and they sounded warlike in a way similar to the prior piece. The communication between the musicians was effectively electrifying.

The final song of the night, “Flight of Icarus” by Garrop, followed the tragic story of Daedalus and Icarus. This piece was different than the previous four pieces. The beginning was much more lyrical and melodic; however, the style quickly changed during the section of the piece where Icarus correspondingly fell from the sky to his death. The originally sweet melody quickly became somber, and the piece accordingly turned dirge-like. After a section of mourning, the piece descended into chaos, sounding dismal and apocalyptic. The cacophony ended suddenly, and the crowd immediately clapped its approval. Marcos Balter and Stacy Garrop seemed very pleased with Lawrence’s performance of their compositions.