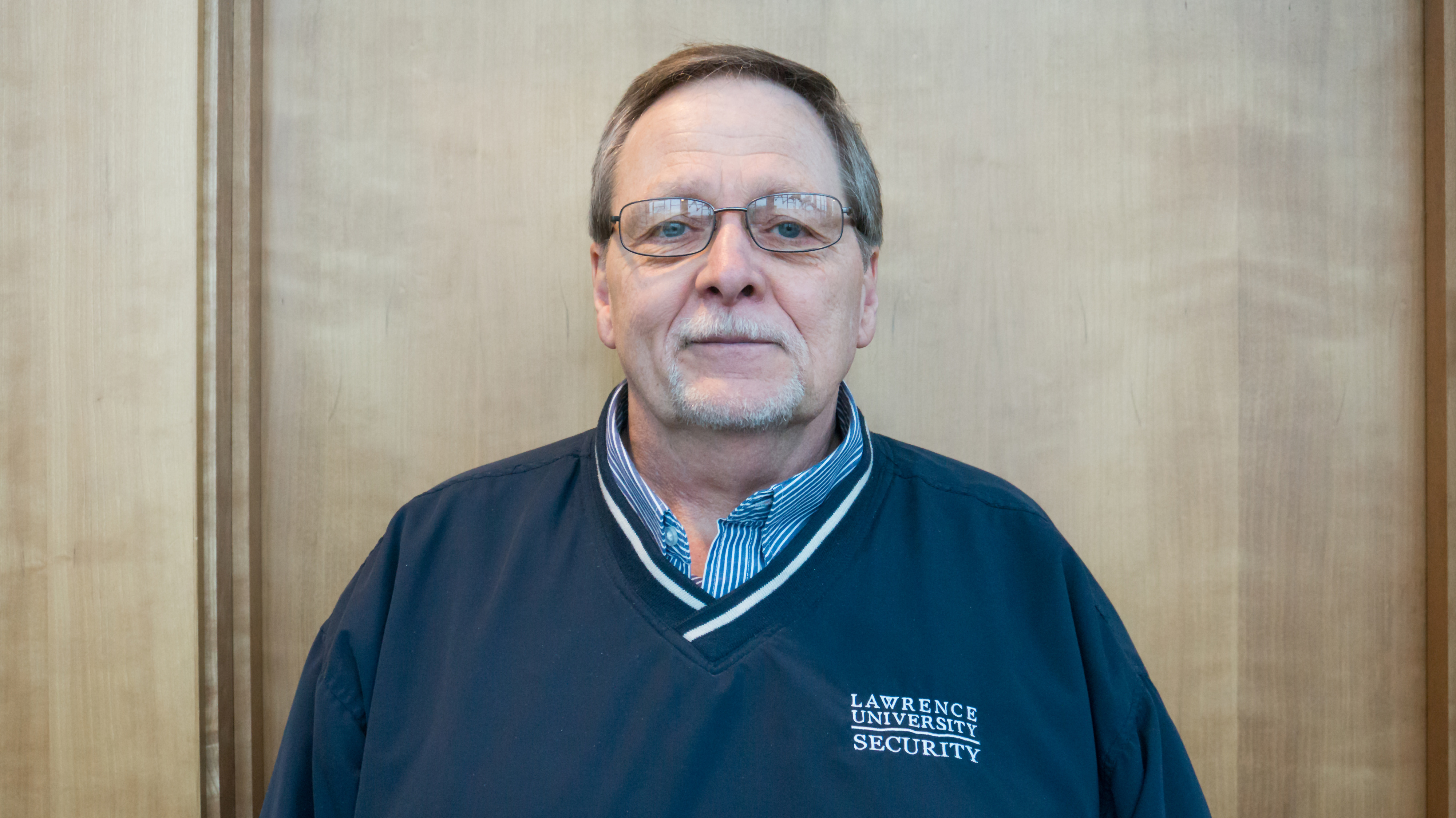 Kevin Goggins posing for a portrait in his Lawrence University Security Guard Jacket.

Kevin Goggins is no stranger to Lawrence University. As Associate Director of Campus Safety, Goggins’ presence in the Lawrence community has been crucial to the security and safety of members of Lawrence, as well as the buildings and property on campus. Goggins is among the many beloved security guards on campus and his kindness, friendliness and personable manner are known to many students, faculty and staff alike.

Over the years, Goggins has found that his favorite part of his post-retirement position as a Lawrence security guard is talking to and learning from students around campus. He knows Lawrence, its buildings and its people quite well; he has walked its premises thousands of times, greeting students with a smile as he goes. In some ways, Goggins sees a whole different side of the Lawrence student body than the staff and faculty on campus during the day. At 2 a.m. during finals week, when professors are in their beds, Goggins is out and about, meeting and talking to students that have a whole night of studying ahead of them. His bright and positive presence is always welcomed by students, regardless of the situation or time of night.

One of Kevin’s favorite spots at Lawrence is the Drew St. pedestrian bridge that connects Ormsby Hall and Brokaw Hall, specifically around 12 a.m. and 3:30 a.m. on a weekend night. The bridge is a passage for people crossing campus to go home, as well as a pathway for students returning from downtown. The encounters he has here always leave Goggins with a smile on his face, and it is the memories from this part of campus that he and his boss, Jon Meyer, always laugh about when thinking back on some great times as members of the Lawrence community.

When Goggins is not monitoring the campus by night, he enjoys watching sports teams like the Packers, Badgers, Kansas State and the Lawrence teams, which are some of his favorites. He also likes to advertise his interest in “Great Lakes Whale Watching,” which always seems to get a variety of responses, naturally. Goggins says he is also blessed to spend time with his sons and grandchildren, and he likes to stay in touch with friends that he has met from his previous job, cherishing the connections he has made with people over the years.

Goggins’ humility and easy-going personality have made him a memorable presence at Lawrence to both students and the greater campus community. In fact, when he was asked how he defined the Lawrence Difference, he responded, “The students. In particular, I love talking with the international students and learning so much from them.”

Goggins has appreciated and enjoyed the wonderful interactions he has had with staff and students on campus over the years. He is equally appreciated by Lawrence students as a crucial member of campus. He is a very special part of the community, and just one of the many Hidden Figures here at Lawrence University.