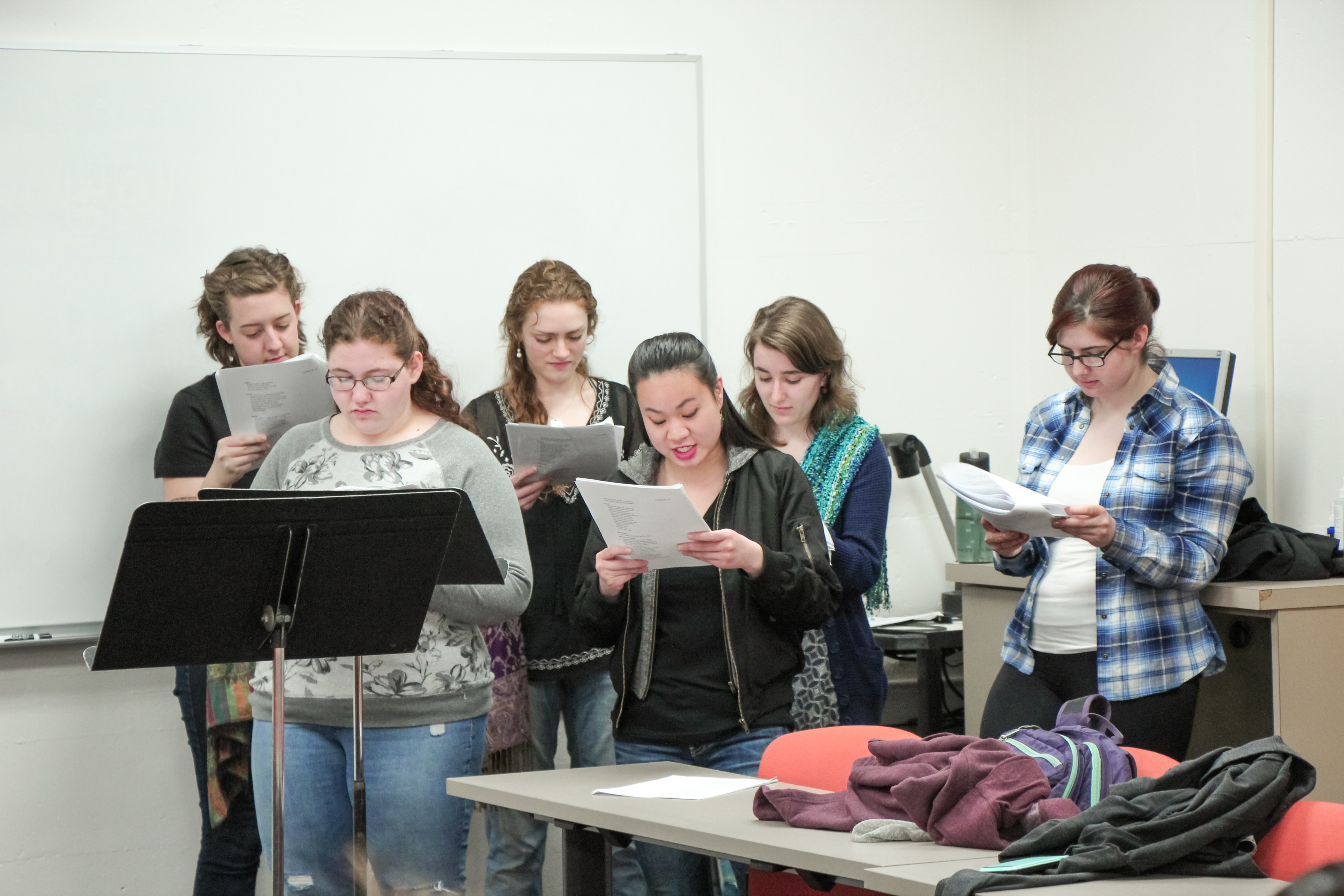 The final event of the week was a reading of Aristophanes’ “The Lysistrata”
Photo by Luke Payne.

Last week from April 10-14, the Lawrence University Classics Department celebrated its annual Classics Week. The week included presentations by students and faculty to educate Lawrence students on the study of classical history and languages.

“Classics has connections with so many different departments and disciplines and it’s nice to have an excuse to renew those relationships. This year involved collaborations with the Wriston Galleries, Gaming House and Prescribed Escape Productions (a student-run theatre group), as well as a symposium discussion that brought together students and faculty from all across campus.”

The symposium, held on Monday, April 10 in the Warch Campus Center, was focused on Greece and Rome in the Fine Arts. This included a roundtable discussion with faculty from various departments, including Associate Professor of Music Joanne Metcalf, Bonnie Glidden Buchanan Professor of English Literature and Associate Professor of English Timothy Spurgin, Uihlein Fellow of Studio Art Meghan Sullivan and two current classics majors, seniors Sarah Perret-Goluboff and Max Lavery.

On Tuesday evening, the 2014 film “Hercules” starring Dwayne “The Rock” Johnson was shown in the Warch Campus Center Cinema. The film was preceded by an introduction by Brook.

In the Wriston Art Galleries, an Ancient Coin Petting Zoo was held on Wednesday. The theme of the event was the history of ancient coinage. The event featured coins from the Ottilia Buerger ‘38 Collection of Ancient Byzantine Coins, a collection which has been featured in many Classics Week events through the years.

A Greco-Roman Game Night was held on Thursday evening in Gaming House. Students were invited to play ancient-themed board games and decorate their own Greek hoplite shield cookies.

The week culminated on Friday with a reading of the play “The Lysistrata” by Aristophanes in Memorial Hall. The reading of “The Lysistrata” has been a part of Classics Week at Lawrence in the past and is a comedic account of how the women of Greece withhold sex to force the men into negotiating a peaceful end to the Peloponnesian War.

Classics Week remains a longstanding tradition at Lawrence and its success this year is a reminder of the continued relevance of classical studies. “I think Professor Segrest put it best when he was talking about the role Classics has played in his own poetry,” said Brooks.

“The kind of slow, deliberate thinking you have to do when working in Greek and Latin, that practice you develop when you spend a lot of time with ancient texts, promotes a specific kind of depth of understanding that is hard to achieve in any other way. And, of course, the thinkers of the ancient world expressed ideas about political community, ethics, human connection and the joys and sorrows of being alive that are still deeply relevant in our modern lives.”

The final event of the week was a reading of Aristophanes’ “The Lysistrata” Photo by Luke Payne. Last week from April 10-14, the Lawrence University Classics Department celebrated its annual Classics Week. The week included presentations by students and faculty to educate Lawrence students on the study of classical history and languages. “[Classics Week] is…