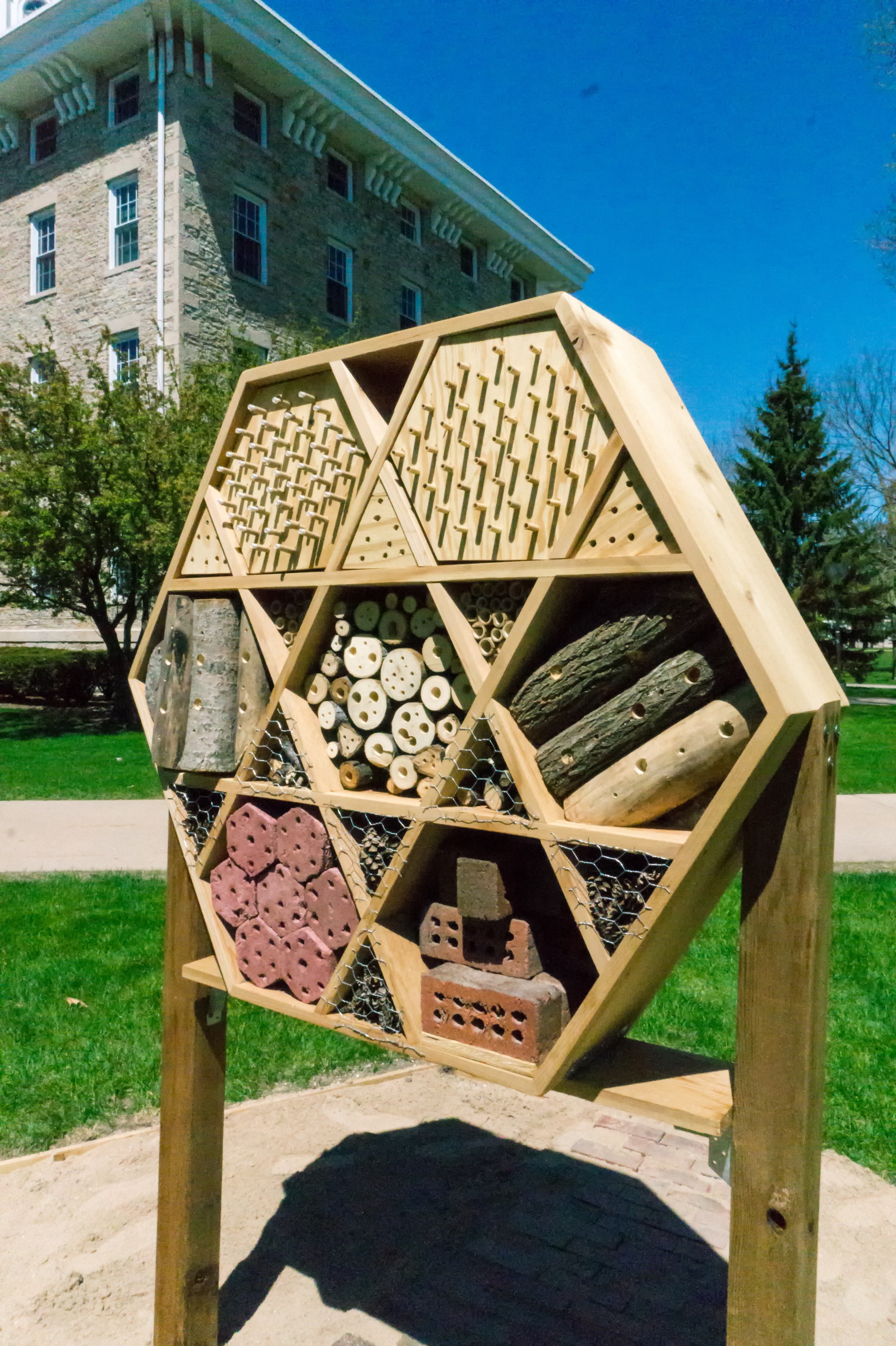 The Appleton Pollinator Project, led by Assistant Professor of Biology Israel Del Toro and five students, Maggie Anderson, Hailey Bomar, Cady Greenslit, Emily Stanislawski and Henry Ward is an eco-friendly student organization on campus. The Appleton Pollinator Project is a study of native bee species and their diversity in urban environments. The study will give insight into the current situation of native pollinators in Appleton, as well as the ways in which we can help increase their diversity. They hope this can be done by installing habitats for these bees in the form of HIVE boxes and wildflower gardens in 17 locations in Appleton.

The team started researching spring term building models and collecting data during winter term. HIVE boxes are those odd structures near SLUG and Main Hall Green that “are composed of 14 panels, seven on each side, containing concrete blocks and bricks are ideal for mason bees, a second layer of wood for carpenter bees, tubes for sweat bees and a sandy layer for the 70% of bees nest in the soil. The purpose of the HIVE boxes is to collect more species of native bees,” according to Del Toro. As of right now the team plans to keep the project going for three years.

Sophomore Maggie Anderson, the Lawrence beekeeper, is excited to be involved in this new project. “I began beekeeping on my farm in high school,” said Anderson, “and I have since expanded my research and knowledge to native bees and the problems that all pollinators are facing in this changing world. To me, this project is a great way to develop my skills as a scientist while working and studying for a cause that I wholeheartedly believe in and support.”

Citizen science is a major component of this project, and the goal is to get as many students and community members involved as possible. Senior Emily Stanislawski loves working with the people. “We are all so passionate about science and about our bees,” said Stanislawski, “and I’ve really found a home within the project. Plus, we get to do really cool hands-on science that involves the community! I care a lot about making science accessible to everyone. I think one of the biggest misconceptions about science is that it is just for ‘smart people.’ The really cool thing about science is that all you have to do to be a scientist is be curious about the world around you!”

“I hope that through this project,” added Anderson, “both Lawrence students and the people of Appleton will gain a more broad perspective of science and understand its importance in their lives. I also hope that this project will help teach people about the vitality of bees and other pollinators in our environment and everyday lives; pollinators are incredibly important in both ecosystems they provide and the food that we eat every day.”

This project helps to raise awareness of bees, the pollinator crisis and science in general. It is more important than ever that people understand science and its role in our society.

“As a student researcher, this project is unique because it gives me an idea of what it takes to orchestrate research on every level,” said Anderson. “When we meet to discuss this project, we aren’t just discussing our system and design. We’re discussing funding, awareness on campus, materials, and potential problems which could arise on all levels. It’s a wonderful exercise for me, as I plan to go into research one day. This project has also taught me valuable hands-on skills such as power sawing, drilling, mixing cement, and building from a design. We build all of these HIVE boxes ourselves.”

Stanislawski added, “I had worked with Professor Del Toro during Fall Term sorting insects that he had collected in previous years. After a term of doing that, he and I both agreed that it was time to start my own project, and other people were interested in joining the lab, and so came the Appleton Pollinator Project. In addition, post Lawrence, I am planning on getting my Ph.D in Entomology, probably working with some sort of eusocial hymenopteran [bees, wasps, and ants].”

Del Toro enjoys engaging with students on this project. They are an awesome bunch with diverse interests,” Del Toro said. “Working on smaller projects within the bigger project is the most fun part. I also just like working in the wood shop.”

The Appleton Pollinator Project can be found on Facebook. There you will find links to their website (BYO-Beez), a video explaining the importance of the project, fun facts about pollinators and regular updates on their progress as they continue to set up the HIVE boxes and experiment. They are also developing an app that will allow users to interact with and participate in the data collection portion of our study by taking pictures of bees and sending them to the team to collect data and build statistical models. Until the project is set up, those interested in helping can spread awareness of this project by “liking” and sharing their page on Facebook or by volunteering to help install the HIVE boxes.