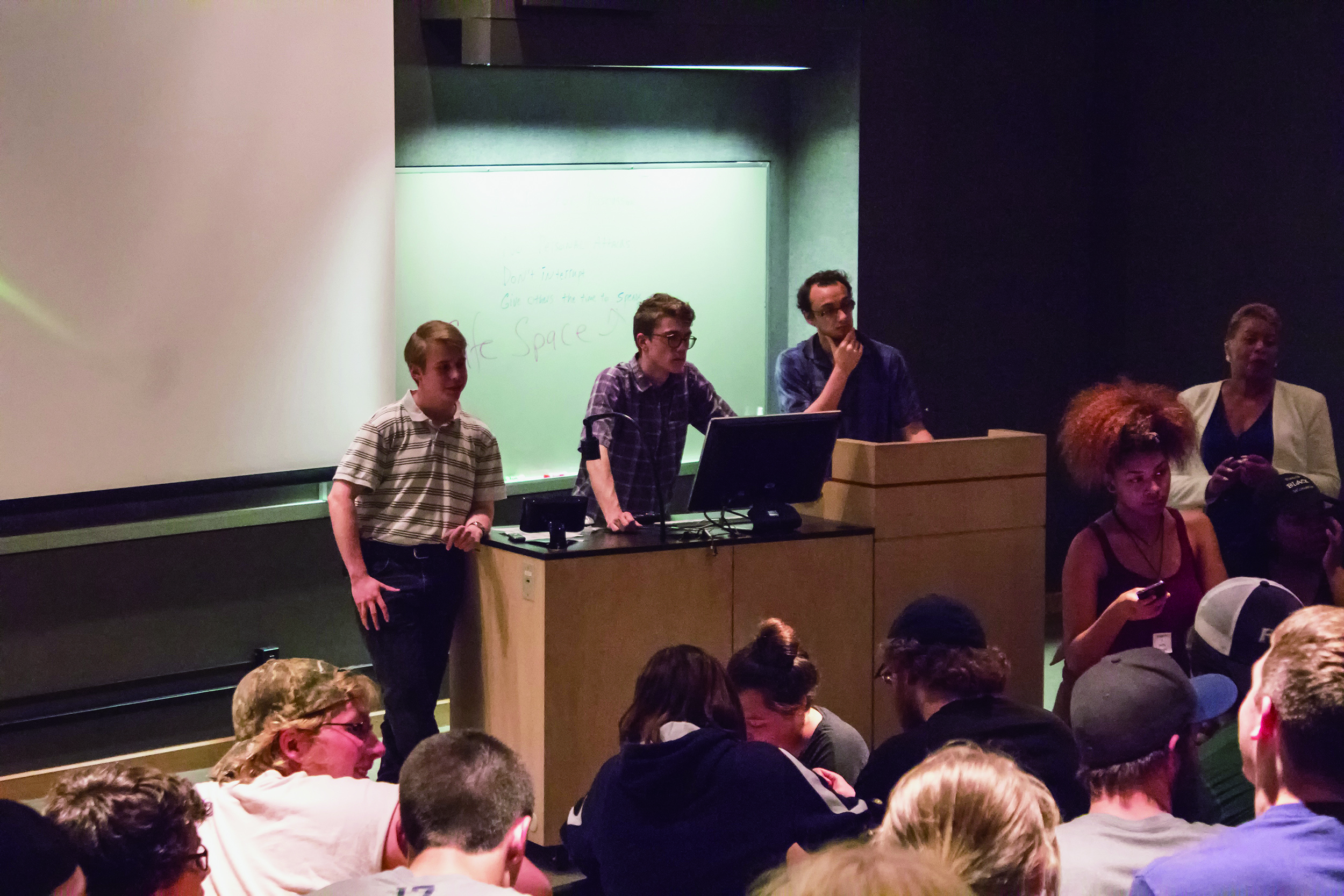 On Wednesday, May 17, a screening and discussion of the 2015 film “Can We Take a Joke” was held in the Wriston Auditorium. The movie focused on the nature of freedom of expression, making the claim that modern society is too easily offended. The event, organized by Students for Free Thought, generated a large amount of discourse on Facebook in the days leading up to the event due to the controversial nature of the film.

The day before the event, Vice President for Diversity and Inclusion and Associate Dean of the Faculty Kimberly Barrett sent a campus-wide email to address the talk circulating around campus. In the email she said, “I encourage members of our university community who might agree and those who might disagree with the premise of the film to come to the viewing in order to engage in authentic discussion of this important issue.”

On the night of the screening, students filled Wriston Auditorium. A short introduction was given by the three founders of Students for Free Thought–freshman Chris Wand, freshman Chris Eichorn and junior Simon Laird. Eichorn prefaced the film with the disclaimer that he had not seen the film beforehand, although Wand had. “It would be wrong to say we agree with every single thing in this film,” Eichorn stated.

The screening was halted halfway through as a heated dispute broke out in the audience and one student was asked to leave after the conflict became too disruptive to the rest of the audience. Barrett stepped in to maintain order and facilitate discussion. “We have people with opposing views, let’s talk about what those views might have been, and let’s do it in a way that we’re talking one at a time,” Barrett addressed the audience. After a brief period of conversation in which many students voiced concerns about the content of the movie, the film was resumed.

Following the movie, the discussion began again. One student said, “There’s been a lot of strategic triggering material throughout the course of this movie.”

One viewer spoke directly to the three club founders, “You need to take responsibility for what is being shown here and the reactions that are being given.” The statement was met with applause from other students in the audience.

Much of the conversation revolved around where the line should be drawn between freedom of expression and harmful ideologies or speech. One student emphasized, “It’s about the culture of free speech we’re trying to promote.”

Another student responded, “The idea of the culture of free speech is an incredibly privileged one. The reality of our society and the systemic oppression is that people of color and women of this country aren’t allowed free speech because if they talk a certain way, bad things happen to them.”

Wand said that the club intended to spark a discussion around the “culture of offense-taking” and “lack of free speech.” He commented that the powerful response from students wasn’t unexpected. “The very response we got was almost a justification for the message of the movie that people were free to come to the movie, they were free to leave if they wanted to, yet they chose to disrupt and try and shut us down.”

One student called attention to an important distinction, “There’s a difference between free speech and consequence-free speech. And I get that name calling is unacceptable in a debate setting, but you can’t condemn name calling for people who are in a group where their parents are getting name-called every single day. There has been systematic and constant name-calling.” They continued, “Free speech exists, yes, however you have to recognize that there has been systematic oppression against certain groups of people. If you want to have these events in the future, you should talk to the people who were being attacked in the movie.”

The discussion opened up to related topics, such as how to conduct and engage in discussions about controversial and sensitive issues on campus. Senior Deepankar Tripurana brought up the point that this event brought many Lawrentians that don’t usually attend events hosted by social justice-oriented groups like Committee on Diversity Affairs (CODA). “Left or right, where are you at CODA conversations?” Tripurana asked audience members. “The worst thing about this campus is how single-issue oriented it is. Come to CODA and we’ll have this discourse. Because we’ve got more in common, and we all suffer from white supremacy and patriarchy.”

The organization, Students for Free Thought, has been criticized for being one-sided. Members of the club have also allegedly created a secret closed Facebook group and denied membership to those who do not share their ideals. These allegations have aroused suspicion and are unusual practices for a student club seeking Lawrence University Community Council’s (LUCC) recognition.

On Tuesday, May 16, before the screening, Students for Free Thought met with the LUCC Steering Committee, seeking recognition as a club. Junior and LUCC President Lewis Berger released a statement on the committee’s decision.

“After much debate, the Steering Committee decided to put them on a trial period, along with several recommendations including finding a neutral moderator for meetings, collaborating with other groups, and reaching out to campus for the purpose of adding new and inclusive membership. The trial period is coming to a close and a decision on the status of the club will be reached at General Council following a discussion of the recommendation made by the Steering Committee. General Council is on Monday at 4:45 p.m. in Warch, and we encourage all students to come and voice their thoughts and concerns to LUCC.”

In the news article “Student Outcry over Free Thought Group” published in the May 19 issue, The Lawrentian reported that the screening was disrupted by a heated dispute in the audience, with one student being asked to leave. This addendum is to provide a clearer description and more information about the dispute.
During the screening, junior Sabrina Conteh loudly voiced her concerns over the film’s materials. In response, junior Jacob Berman replied with vulgarities. Freshman Chris Wand reportedly paused the screening, started to take a video of the situation with his phone, told Conteh to “shut up and leave” and threatened to call Campus Safety. Conteh protested Wand’s filming of the situation without her consent, and proceeded to leave the screening. Dr. Kimberly Barrett then stepped in to maintain order for the screening to continue. Multiple bias reports surrounding this incident have been filed, and the Office of Diversity and Inclusion is in the process of examining these reports.

Photo by Allegra Taylor. On Wednesday, May 17, a screening and discussion of the 2015 film “Can We Take a Joke” was held in the Wriston Auditorium. The movie focused on the nature of freedom of expression, making the claim that modern society is too easily offended. The event, organized by Students for Free Thought,…