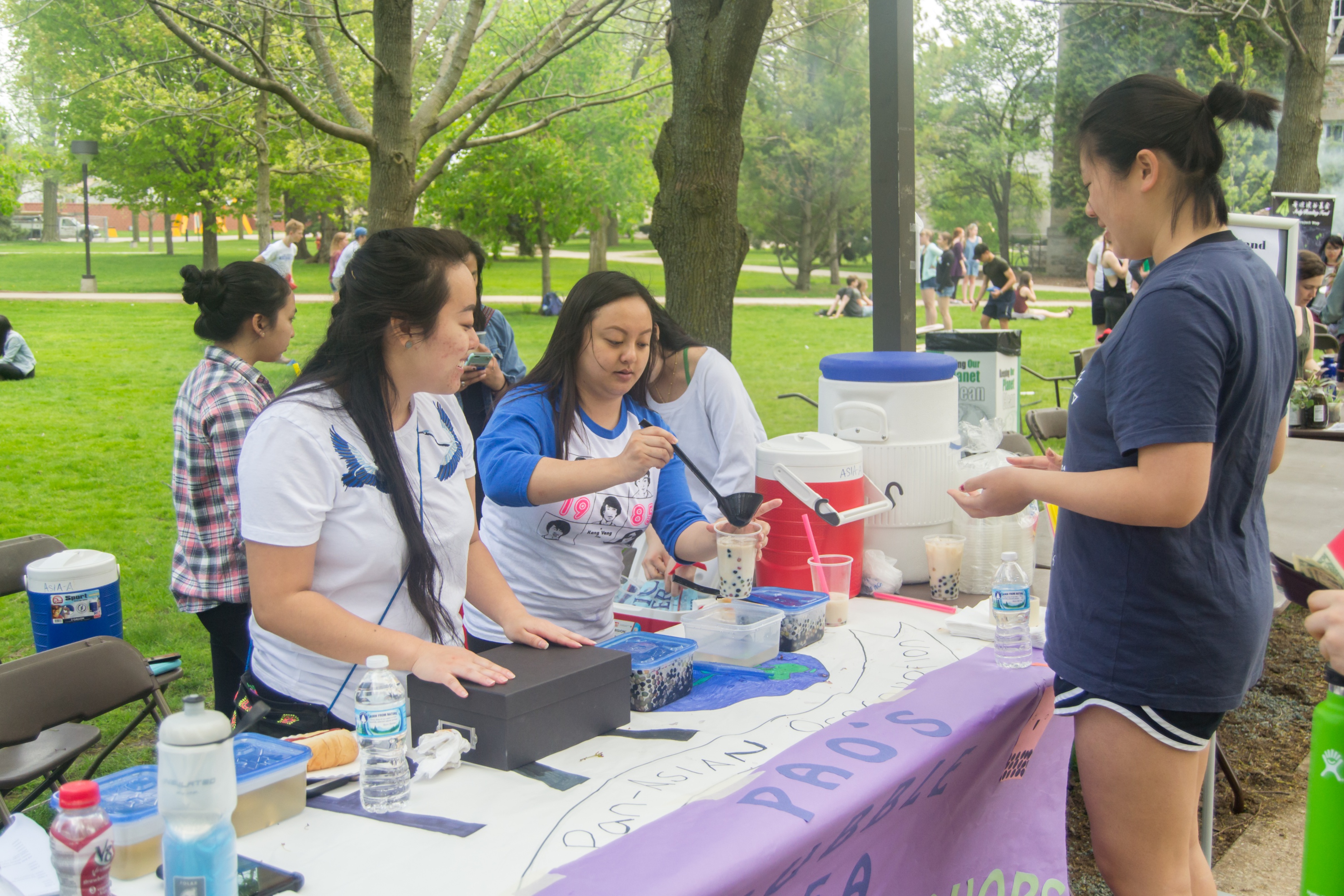 On Saturday, May 13, the Event Planning and Organizing Committee (EPOC) hosted the first Spring Carnival on the Main Hall green from 1 p.m. to 4 p.m. The event featured live bands, booths for various organizations on campus, free food and drinks, an inflated contest ring and a mechanical bucking bronco. Although there was a steady stream of people coming and going, many stayed around to chat with friends and enjoy the music, food and the gorgeous weather.

The Spring Carnival is “an updated version of Ormsby Zoo days,” explained sophomore and EPOC president Alfiza Urmanova. This is the first year that EPOC has run the event and called it the Spring Festival. Sigma Phi Epsilon managed the grilling for the festival. As this was its first year, those who attended took part in the creation of what may be a new tradition.

One live group was the Lawrence-based band MF Gritz. They mentioned that they have a new album coming up, so the Spring Festival does not have to be the last time you hear their catchy music.

Quite a number of different organizations had booths to fundraise or spread awareness. KidsGive, an organization dedicated to helping children in Sierra Leone, had a booth to talk to anyone interested. The Lawrence branch of Amnesty International, an activist group that supports international justice, had a booth, as did Lawrence University Native Americans (LUNA), which promotes awareness about Native American/Indigenous cultures.

The Pan-Asian Organization was selling bubble tea as a fundraiser. There was a table for Radio for Rwanda featuring information for anyone interested, as well as potted plants for sale.

The Rabbit Gallery, a pop-up art gallery, was present along with Kappa Alpha Theta and the Chinese Students Association. The Andy Reading Fund had a booth offering free henna tattoos, a type of artwork where they created an intricate penned design on your skin. Although the henna was free, they were welcoming donations. The Andy Reading Fund, a new club on campus, seeks to promote the education of rural students around the world.

Although the event wasn’t specifically advertised to the Appleton community, some people were drawn in by the music and grilling burgers and hot dogs, and joined the students, faculty and children gathered on the lawn.

The purpose of the festival was to allow people to “enjoy the weather” and “get distracted from stress and work,” commented Urmanova, and the people there were doing just that, while spreading awareness for important organizations on campus and perhaps even supporting a worthy cause.

Pan-Asian Organization sold bubble tea as a fundraiser. Photo by Emily Midyette. On Saturday, May 13, the Event Planning and Organizing Committee (EPOC) hosted the first Spring Carnival on the Main Hall green from 1 p.m. to 4 p.m. The event featured live bands, booths for various organizations on campus, free food and drinks, an…