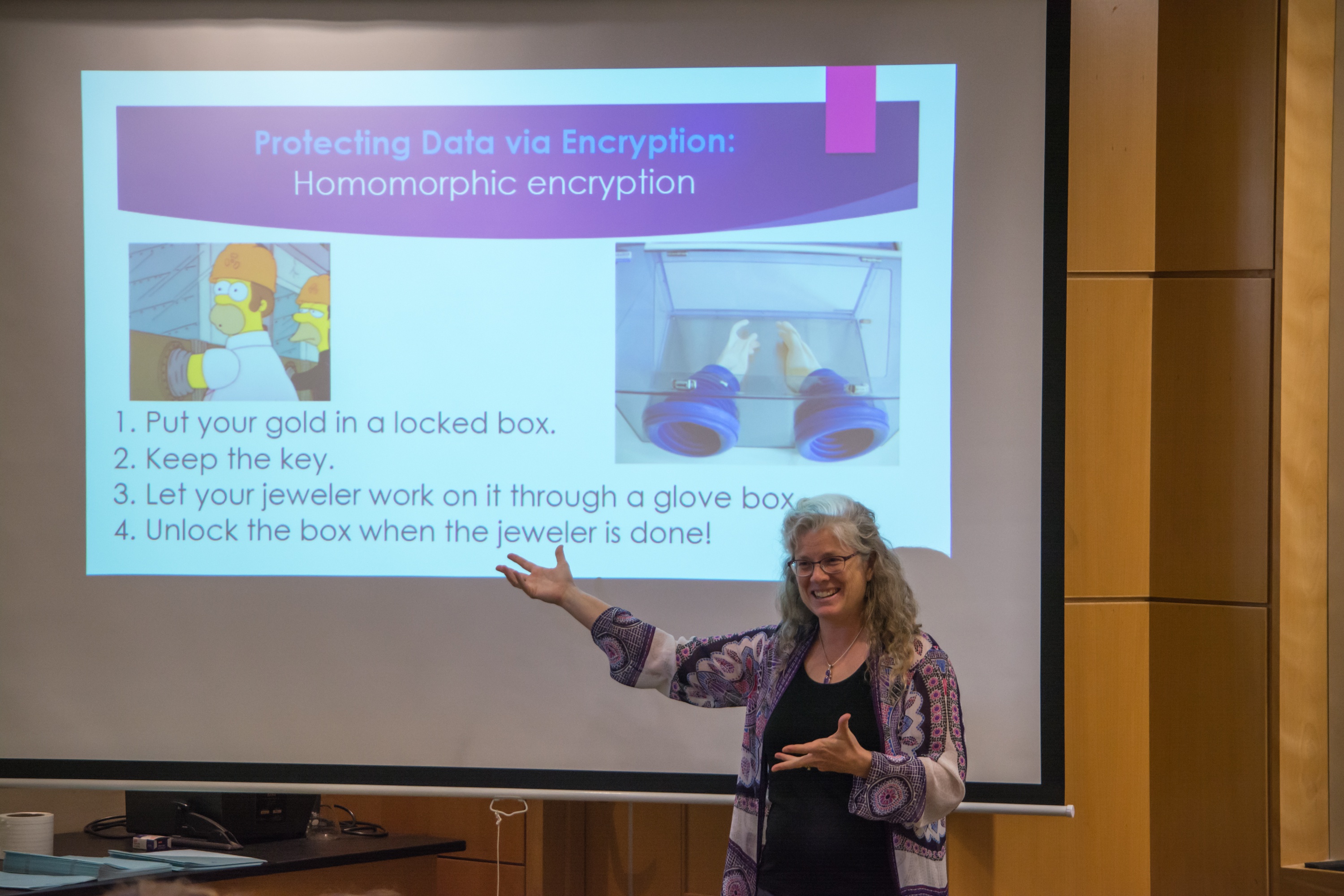 On Thursday, Sept. 21, Kristin Lauter returned to Lawrence to give a talk in the McDougal Lecture series titled “How to Keep Your Genome Secret”. She earned her BA, Master of Science and PhD all from the University of Chicago. So, her return to Lawrence isn’t as an alumna, but rather as the daughter of Chuck Lauter, the first Dean of Students.

Chuck Lauter attended the talk, along with students and professors alike. In her talk, Kristin Lauter focused on the research being done on genome data security by organizations such as Microsoft Research, where she works as the head of the cryptography group. In addition to this impressive position, she also served as the president of the Association for Women in Mathematics from Feb. 1, 2015 to Jan. 31, 2017. Lawrence has our own chapter of this organization, encouraging and supporting future leaders in mathematics.

The driving force behind genome data encryption that Lauter has been working on recently is the iDash Genome Privacy-Protection Challenge, hosted by the iDash Consortium and partially funded by the National Institute of Health (NIH). The competition is hotly contested by teams from organizations such as Microsoft, IBM and Stanford/MIT.

Why put so much effort into securing genome information? Here’s one example Lauter gave. “An artist took a snippet of a genome from someone’s hair [and was able to] recreate a statue of that person from it.” Our genome contains all of our genetic information, giving anyone with access to it the entirety of our genetic code. People “can deduce lots of very personal health information from genomes,” said Lauter.

Genome data could even be the “currency of the future,” as an extension of the current trend of selling personal information to be exploited for market purposes. Unprotected genome data could also lead to genetic disease disclosure and subsequent genetic discrimination.

Genome data privacy is an important issue. Lauter explained the challenge that she and her team have been working on as this: “how can one share genomic data in a way that preserves the privacy of the data donors without undermining the utility of the data? How can they perform large scale, privacy preserving analysis on genomic data in an untrusted cloud environment or across multiple users?”

Lauter and her team have been focusing on homomorphic encryption. She explained it in four steps. “Put your gold in a locked box. Keep the key. Let the jeweler work on it through a glove box. Unlock the box when the jeweler is done.” In this way, the gold or data is worked and shared, yet the integrity of the resource is preserved.

More realistically, “homomorphic means to preserve the structure or identity” and homomorphic encryption is where the data is encrypted before it’s manipulated. It makes the order of encrypting and calculating the data irrelevant, allowing whatever order best preserves the privacy of the data.

The homomorphic encryption Lauter and her team are working on “use hard lattice problems as the basis for the encryption”. These are very secure, but have only been around for about 20 years. They “need to have people working on the problems, and need to have time to learn how to crack them,” she explained. She specializes in number theory and algebraic geometry and works as the head of the team.

She ended the talk with three demos of accessing, calculating and returning genomic information from cloud storage. Even with over a whole second of communication delay time to Israel and back, the prediction of the flowering time of a flower based on genomic data took only 2.887 seconds to complete. A linear function is generated, the data in encrypted and sent to cloud, where a prediction is generated and sent back, then is decrypted locally. All in 2.887 seconds.

Lauter used analogies to make her lecture easier to understand. Photo by Emma Gilshannon On Thursday, Sept. 21, Kristin Lauter returned to Lawrence to give a talk in the McDougal Lecture series titled “How to Keep Your Genome Secret”. She earned her BA, Master of Science and PhD all from the University of Chicago. So,…