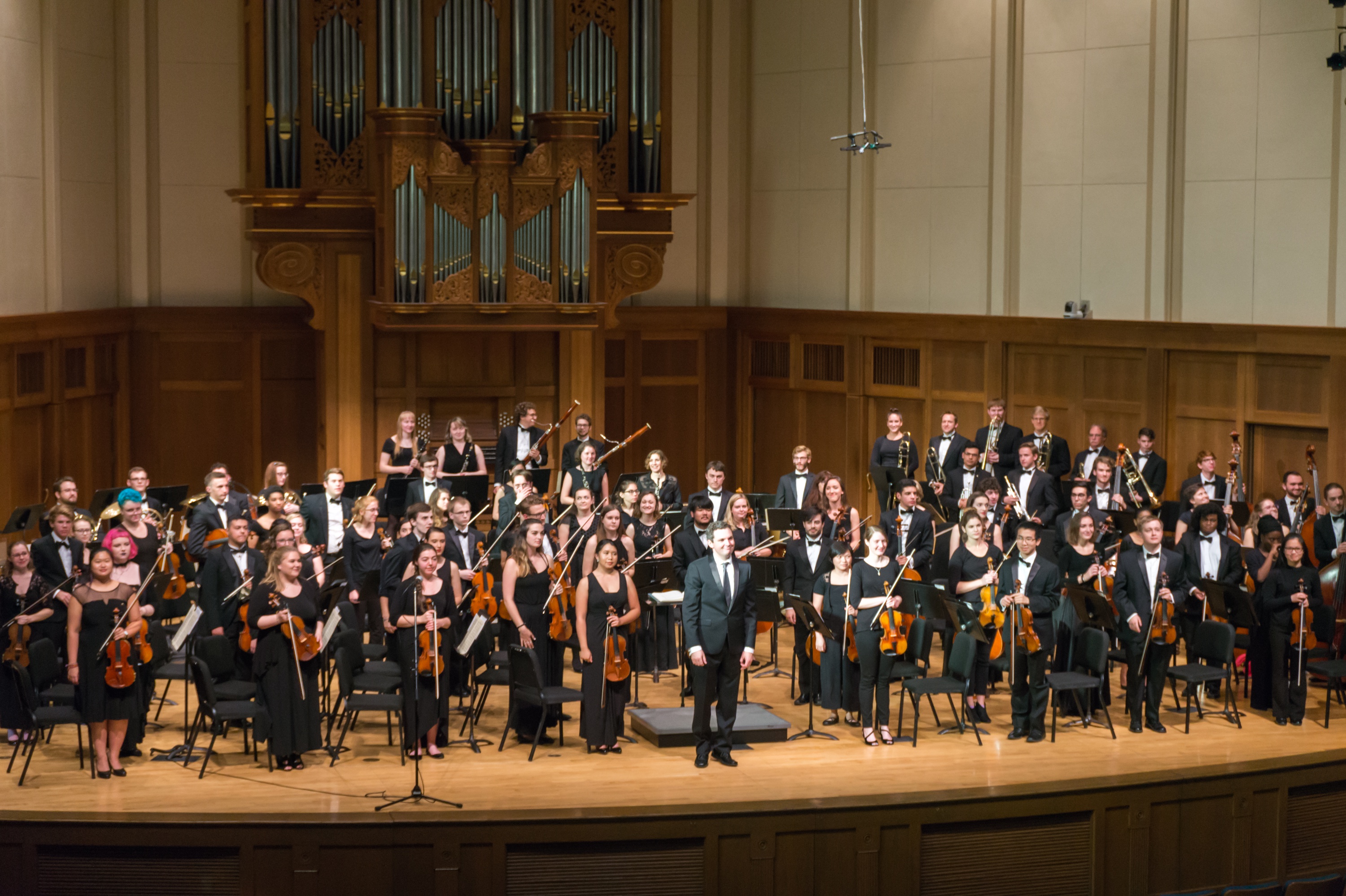 LSO stands as they are applauded in the Lawrence Memorial Chapel.
Photo by Taylor Blackson

Lawrence University Symphony Orchestra (LSO) held their concert, “Visions of Grandeur,” on Sunday, Oct. 8 in the Lawrence University Memorial Chapel. This was the orchestra’s first performance since the start of the 2017-18 academic year. Conducted by Assistant Professor of Music and Director of Orchestral Studies Mark Dupere, LSO started off the year on a high note. Three pieces were performed, with the last piece dedicated to Laura Van Asten. This ended the concert on an emotional note.

The first piece performed was “Overture to Candide” by Leonard Bernstein. The piece was a short yet triumphant return to the stage for LSO. The overture, based off the Voltaire novella, was predominantly up-tempo and lively. The soothing, warm sound of strings resonated through the chapel. As the piece went underway, I quickly remembered how much I enjoy the orchestra concerts. The piece painted a vivid image of adventure throughout the five minutes it lasted.

Next was “Fantastia on a Theme by Thomas Tallis,” a composition by Ralph Vaughan Williams. Before the piece was played, four singers introduced the theme and melody, standing in a balcony in the chapel. This precursor to the orchestral performance nicely set the tone and made the audience fully aware of the piece’s theme. After this, the orchestra began very gently; the sound was barely audible. Gradually, the dynamics swelled in a peaceful yet powerful way. Dissonant chords were resolved into the most beautiful and agreeable sounds. As this piece ended, I looked around at the musicians, and each one was wholly expressive in their own way.

The last piece, “Symphony No. 3 in E-flat Major, Op. 97 (Rhenish)” by Robert Schumann, was my favorite part of the afternoon. This exhilarating piece was dedicated to Laura Van Asten, an LSO trombonist who passed away over the summer. As Dupere introduced the symphony, a sadness filled the stage. This sadness would soon give way to an exultant and jovial piece, celebrating Laura’s life. Though I did not personally know Laura, this piece seemed like the perfect choice to commemorate her. The piece was filled with grandiose horn parts, and the exuberance of the trombones was particularly touching.

The end of this piece and the performance as a whole was very moving for the audience and LSO members themselves. As a lengthy standing ovation took place, it was easy to see that the final piece perfectly commemorated Laura Van Asten for the people who knew and loved her. This made the event especially important. Note that the Lawrence University Symphony Orchestra has an upcoming performance on Saturday, Oct. 14 for the Kaleidoscope Concert, and I would encourage everyone to attend.