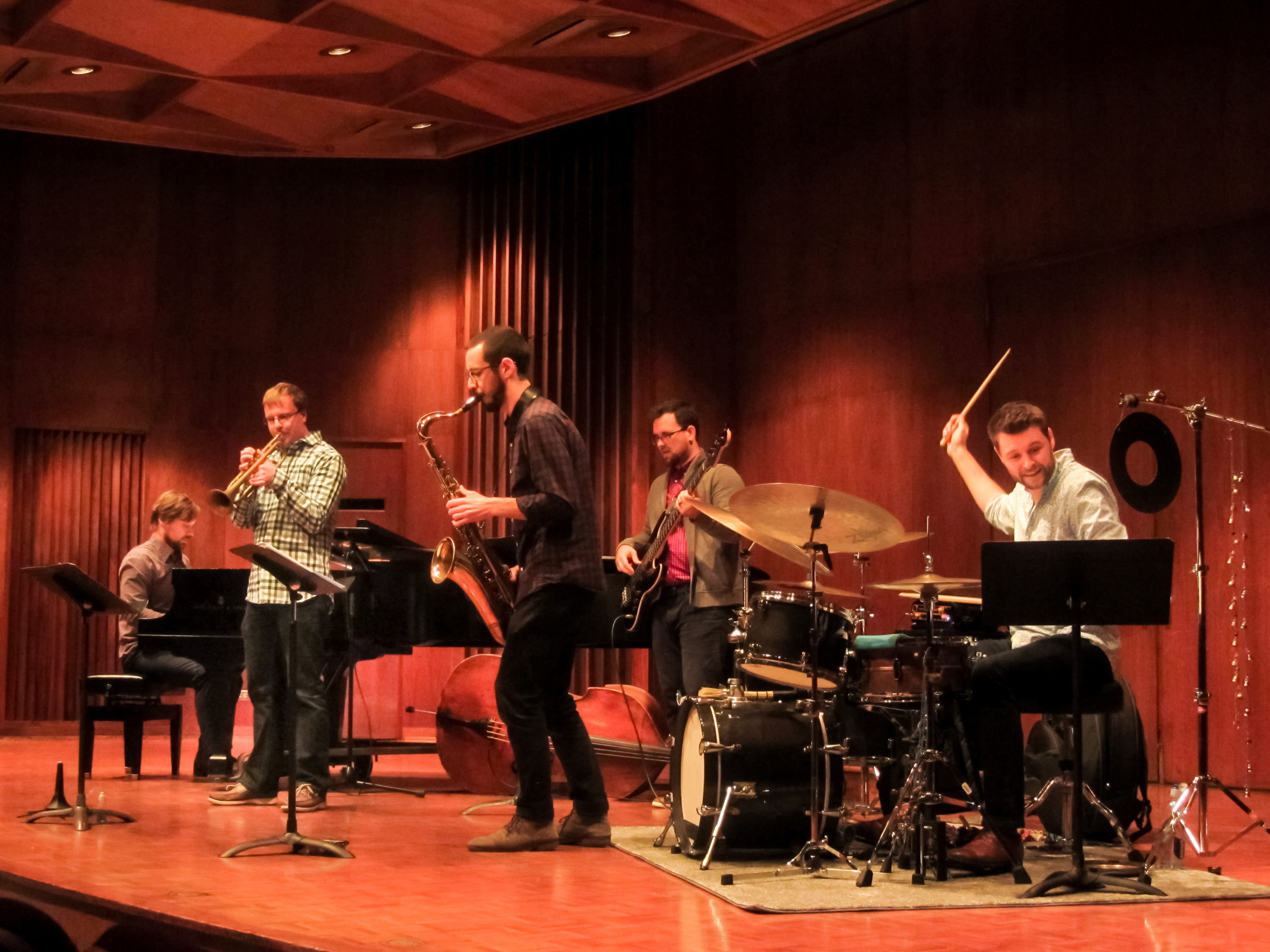 One of my favorite ways to decompress before decompressing even more during reading period is to see live music where I can just sit back and enjoy, especially when it is free and just a short walk away. (I’m going to miss Harper Hall a lot after I graduate.) The Paul Dietrich Quintet gave me exactly that on Oct. 18. The Chicago-based group, which includes two alumni—Dietrich ’10 on trumpet and Andrew Green ’11 on drums—features their leader’s warming and inviting compositions. Rounding out the lineup are Dustin Laurenzi on tenor sax, Paul Bedal on piano and Tim Ipsen on bass. (Past readers may recall my column on TWIN TALK where I briefly mentioned the many other groups its members are in—well, this is one of them.) The five of them together are the perfect vehicle for Dietrich’s writing, which is polished and tight while often maintaining voracity that propels the compositions forward.

Each musician had a humble, explorative sound, but the voice that was nearly always in the foreground was that of the composer. Although this voice was also modest and did not call attention to itself, it still had an immense intensity to it, crafted by Dietrich to groove hard with experimentation in meter rhythm and unexpected interlocking parts. Often, the sound relied on simple melodies and patterns within single instruments that created a more complicated amalgamation when combined and layered with the other voices. At the time, the music had a familiar, recent nostalgia to it that I could not put my finger on. However, after listening back to the recordings and thinking about it more, the late Director of Jazz Studies Fred Sturm’s influence became apparent.

Most of the tunes were upbeat, dipping into fusion and the like, but my favorite of the concert was the brooding, sonically-seasonally-appropriate “Puddles.” Listening to it felt like autumn at dusk; arco bass, slowly-bending sax and cymbals provided a thick bed of drones, while piano and bells twinkled slightly above. The trumpet emerged on top with the rest of the quintet following fluidly, making for the most introspective sounding tune in the set, whereas the others seemed more extroverted. “Puddles” also came exactly in the middle of the concert, as well as close to the middle of “Focus,” the quintet’s sophomore album from this past May. It was not only a change from the other pieces, but a slow breath in and out before embarking on the rest of the concert’s momentous compositions.

While the music certainly spoke for itself, its creator’s personality shaped the show as well. Dietrich’s quiet sense of humor snuck in between nearly every song, causing his bandmates to stifle snickers while the audience laughed with them. But just like his music, his comments were honest and entertaining, at one point even admitting that he was talking so much just to give his embouchure an ample rest. His personality—as well as the other members’—made the group seem extremely comfortable to be there, an aspect that can aid in engaging with the audience exponentially more. What helped this was the fact that this concert was a homecoming for the quintet’s two alumni, being particularly significant for Dietrich, who had not played at Lawrence since his graduation. Thus, the concert felt like him getting back into the swing of things, as well as simultaneously presenting himself as a visiting artist who wanted to give back to the Conservatory that nurtured him.

The Paul Dietrich Quintet truly graced the stage last week and piqued my interest in modern, more straight-ahead composition—music I have not immersed myself in enough, apparently. The circle of Midwest jazz is closely knit, and this is yet another experience that has drawn me closer to it.

The Paul Dietrich Quintet performs in Harper Hall on Wednesday night, Oct. 18. Photo by Nidi Garcia One of my favorite ways to decompress before decompressing even more during reading period is to see live music where I can just sit back and enjoy, especially when it is free and just a short walk away.…