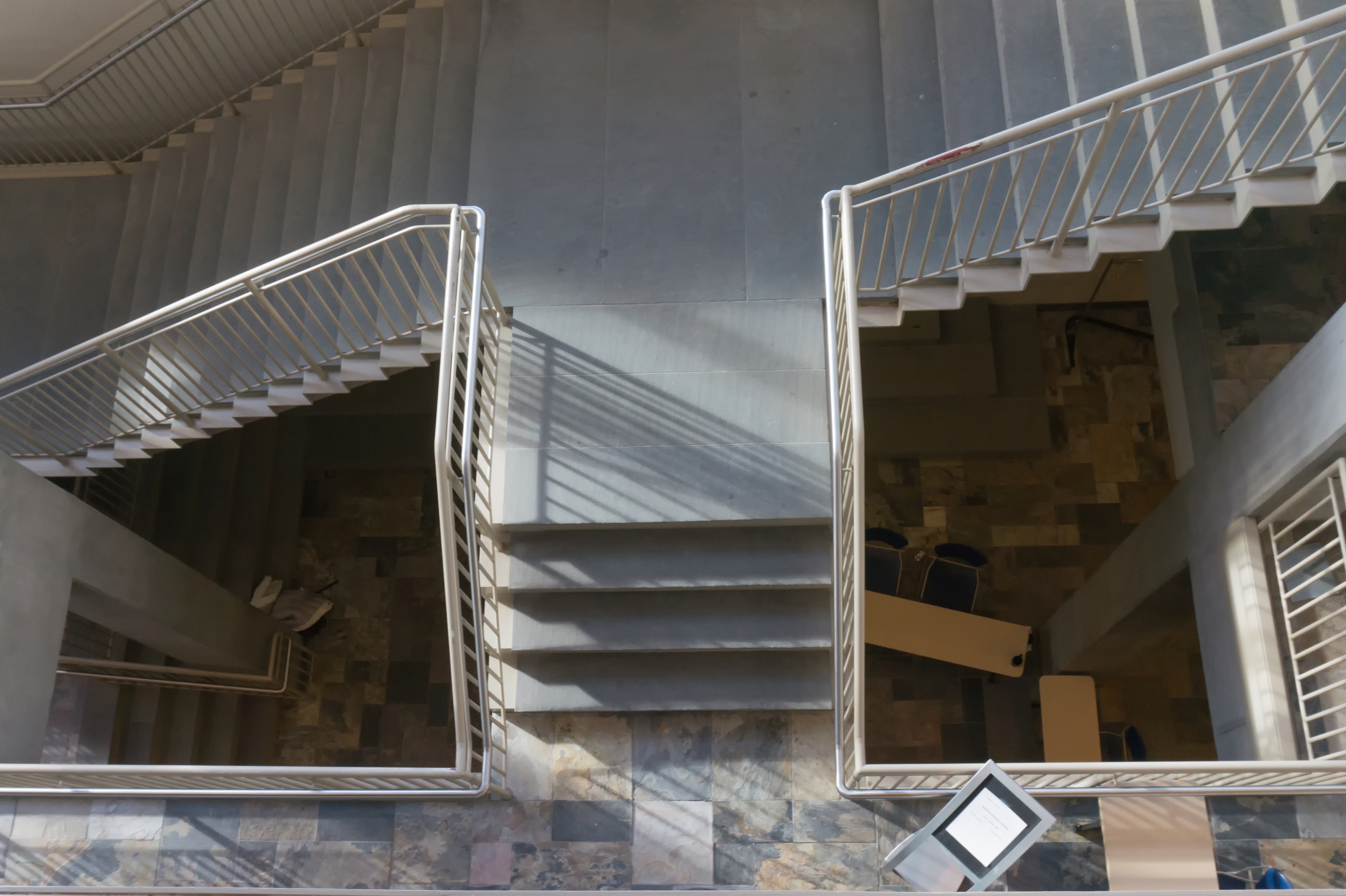 The main staircase in Warch Campus Center, which provides access to Andrew Commons, the student mailroom, and a view of the Sustainable Lawrence University Garden (SLUG).
Photo by Larissa Davis

Sustainability: it is one of the many ways in which Lawrentians work to make the world better. There are many ways to promote sustainability, and what better place to start than in our very own campus center? The Warch Campus Center was constructed between 2007 and 2009 and, at the time, used state-of-the-art technology for everything from lighting to waste management. Most of the materials for the building were sustainably-harvested and came from resources in Wisconsin, from the wood studs in the walls to the stone veneer on the outside of the building.

One of the few exceptions to that rule, as some on campus learned during their Admissions tours, is the slate floors on the first three levels of the building. These slate for these floors was imported from India, 10,000 miles away, according to Campus Center Director Greg Griffin, who sat on the committee when the center was being planned and constructed.

Some rumors have abounded about this stone, specifically that it was used at the request of a wealthy anonymous donor who, depending on who one may ask, may or may not have had anything to gain by the university using stone from India versus the slate rock available from, for instance, New York. Those rumors are false, Griffin says, at least as far as he knows.

“There were very few, if any, donor restrictions placed on the construction process,” he said. Despite the obvious sustainability issues with imported building materials, the campus center and the university in general are striving to be more sustainable because, while the technologies in the campus center and other buildings may have been state of the art at the time they were installed, technology has rapidly evolved and so have the ways in which the university can be more sustainable.

“I think every decision that’s made in terms of changing things out, we still look back to what were the original purposes of the building, how has technology evolved since then and if we can become more energy efficient or more sustainable in what practices we do,” he said. In conjunction with the Sustainable Lawrence (Green Roots) program, the campus center has upgraded all lighting to LEDs, implemented new waste control strategies and is now adding air hand dryers in the restrooms.

These new improvements have not been without challenges, though. One of the first decisions made when the new campus center opened was to stop selling bottled water in the café, and Griffin said that there was some pushback from students on that decision.

“As a society,” he explained, “we’re pretty accustomed to being able to get a bottle of water and now if you want a glass of water you go into the café and there’s a dispenser and you put a glass in it or you take your Nalgene [water bottle] and you fill it up.” Since then, students have gotten used to not having disposable bottles of water, but influencing behavior of students, faculty and staff is still one of the primary challenges of implementing sustainability projects, especially when it comes to waste management.

Remedying these challenges is the main goal of a pilot project taking place in Youngchild Hall and Trever Hall this term in which new container designs and signage will be used to, according to Professor of Geology and Special Assistant to the President Jeff Clark, “help users make the right choice when discarding items.” Griffin, who currently serves on the Sustainability Steering Committee with Clark, is optimistic about the impact of the improved disposal system designs.

“You can change behavior just by guiding people,” Griffin explained. “People will, for the most part, make the right decision. If you walk up to a container and it’s got a round hole in it and you’ve got a plastic bottle, you’re putting it in that one versus the garbage can.”

He added, “When you’re faced with that dilemma at the end of class and you’re walking to that beige or gray container right next to the door as you leave the classroom, you really aren’t in a position to be able to make a decision. A lot of people just simply chuck everything into the same container.”

Another challenge with any sustainability project is, of course, money. “As technology changes, as we moved into the building and said ‘We could have done this differently, all of those kinds of things. Well, the money isn’t necessarily there.’”

To help with this, the University was recently awarded a grant from Margaret A. Cargill Philanthropies in order to expand their sustainability programs, especially in the form of education and infrastructure development like the new waste management system. Above all, Lawrence is constantly taking steps to improve sustainability campus-wide while adapting to an age where taking care of the environment is more crucial than ever before.

The main staircase in Warch Campus Center, which provides access to Andrew Commons, the student mailroom, and a view of the Sustainable Lawrence University Garden (SLUG). Photo by Larissa Davis Sustainability: it is one of the many ways in which Lawrentians work to make the world better. There are many ways to promote sustainability, and…