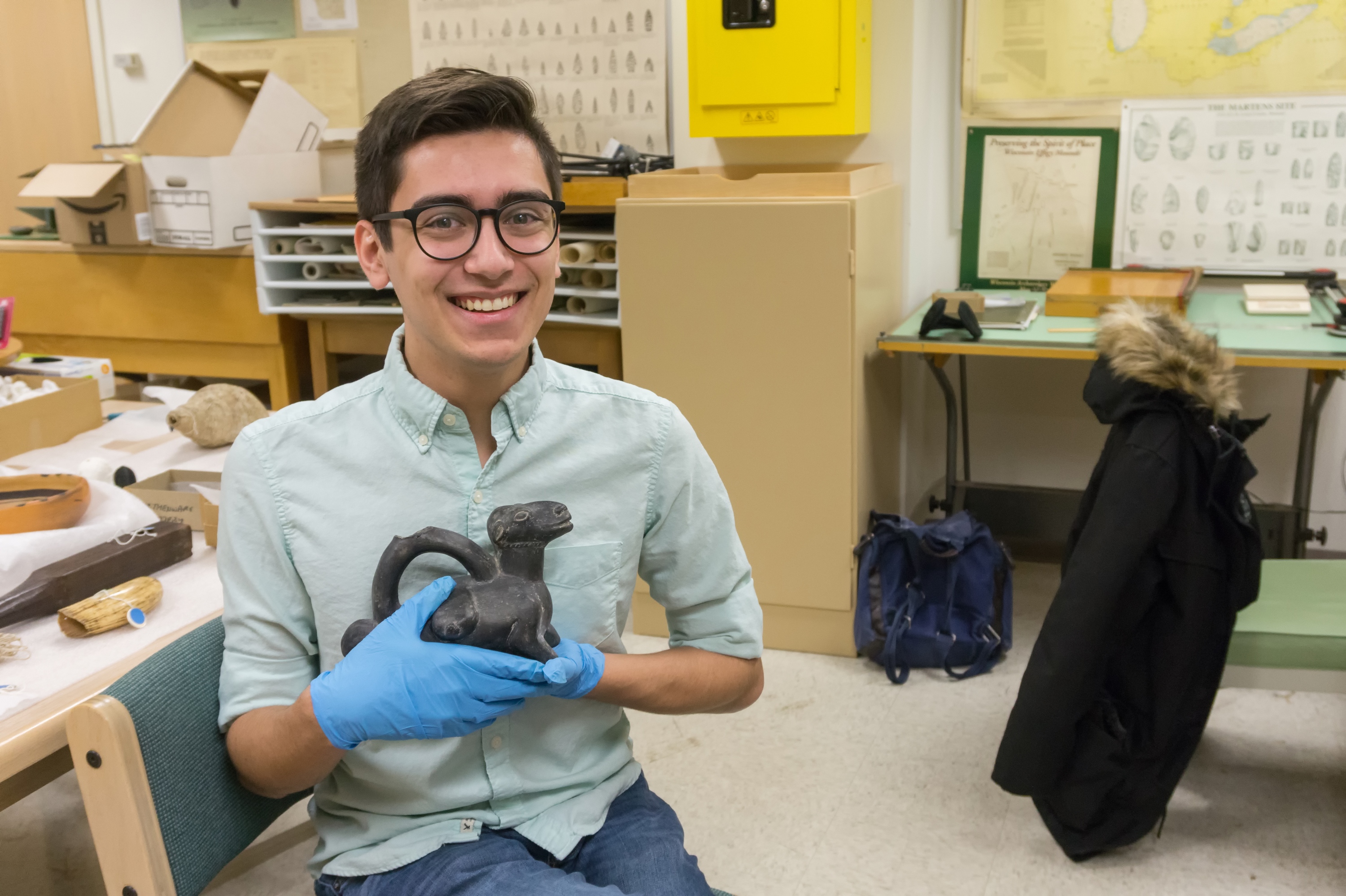 Senior Manuel Ferreira with the chimu llama, dating back to the 10th through 15th century.
Photo By Larissa Davis

In the gloomy chill of Lawrence’s Winter Term, sometimes nothing seems to be more appealing than to close the door, make some tea and spend the day indoors and inactive. For senior Anthropology major Manuel Ferreira, the first week of Winter Term has been spent keeping warm inside of Briggs 344, in what’s known as the ‘batcave,’ where he’s been studying and preserving an array of objects that he holds dear to his heart. For him, there is no better way he could spend his time.

Ferreira is studying both Cultural Anthropology and Archaeological Anthropology. He is also part of the interdisciplinary Museum Studies degree and has a minor in Music. Though Ferreira started his studies at Lawrence as an Oboe Performance Major, once he took a Cultural Anthropology class, and was given the opportunity to work as an intern at the Milwaukee Public Museum, where he has returned to work at for the last two years, he realized that anthropology is his true passion.

Ferreira spoke to this passion. “I enjoy learning,” he stated, “which is sort of why museums are perfect for me because you are constantly learning about everything. That’s what I enjoy most. I also really enjoy working with objects, learning about objects, teaching others about objects and helping people to understand the cultures they come from. Museums are sort of a place for preserving protecting and educating the public about our collective culture and history of the world so I really enjoy protecting them and learning about them.”

While Ferreira’s personal decision to transition from Music Performance to Anthropology was a difficult choice to solidify, Ferreira could not deny that he lights up when given the opportunity to talk about the objects he cares for and the cultures they come from. From a dagger made out of the bone of a cassowary found in Papua New Guinea, to Papua New Guinean storage vessels, even to a Chimú vessel made between the 10th to 15th century in the shape of a llama, Ferreira has ample joy, knowledge and compassion for these objects and their stories.

Ferreira boasted that he learned how to share this joy and knowledge from his experience as a musical performer. He explained, “Music helped because you’re performing as a musician. Talking to people about research and being able to captivate them is a performance as well, I think. I have competed in a research presentation with Wisconsin’s Federation of Museums with a poster presentation. I went against grad students and ended up winning and I think something that set me apart was my ability to be charismatic. I was performing and I gained that ability from music.”

Ferreira is excited to be able to continue sharing his love of understanding cultures through objects through his Senior Experience Project where he is working to put together an exhibit showcasing objects found from the Anthropology Department’s collection, as well as pieces from the permanent collection in the Wriston Art Galleries. The focus of his exhibit will play with the aspects of ‘wonder’ and ‘resonance.’

Ferreira came across these two descriptors in an anthropology class and was compelled to find new ways to apply wonder and resonance to the museum experience. Ferreira broke this idea down as he stated, “When a museum puts an object in a case or on display, that makes it art and that affects the way people view it. This enhances that aspect of wonder, and I want that to happen. But then I’m also working to include a technological aspect that will let you click on the image in the exhibit and bring you to all the information from the research I’ve done. This brings in that aspect of resonance. I want to captivate people, but I also think it’s important people realize cultural context and history and connections because if you don’t have that then what is there really?”

Ferreira was open to explaining the significance of the objects he’s hoping to include in his exhibit and is currently working to finish up the research end of the project, as well as finalizing which objects will make the final cut. He suggested that the Chimú llama vessel has become a focal point of the envisioned exhibit somehow.

He stated, “The vessel is maybe one thousand years old. It was made out of a mold that had two halves. You’d put clay in it and then take the two separate halves and put them together to get sealed. That’s how you could manage to get a more complex shape. And the llama and alpaca had great purpose in the culture as the largest mammals. So not only is the llama interesting and in that way captivating, but there’s also this idea of resonance in the connection to the culture that made it.”

It seemed as though Ferreira could not contain his love for these objects and his learning. He shared that he ultimately knows he made the right choice in becoming an anthropology major. “I realize I light up when I talk about this stuff and I love it,” he said. “I love everything about what I do. This is what I was meant to do. So it’s okay to change your mind. It might be scary at first, but you might realize that changing your mind can be one of the best decisions you ever make. I never thought I would find something that I love this much, but to my surprise I did.”

Ferreira’s exhibit will be on display Mar. 4 through Mar. 11 in the Mudd Gallery and will hopefully be a space that resonates wonder, understanding and a love for learning through connecting.

Senior Manuel Ferreira with the chimu llama, dating back to the 10th through 15th century. Photo By Larissa Davis This column intends to find out what it means to be empathetic, to strive for understanding and to document fulfillment in action by having conversations with students working on Senior Experience Projects at Lawrence on how…