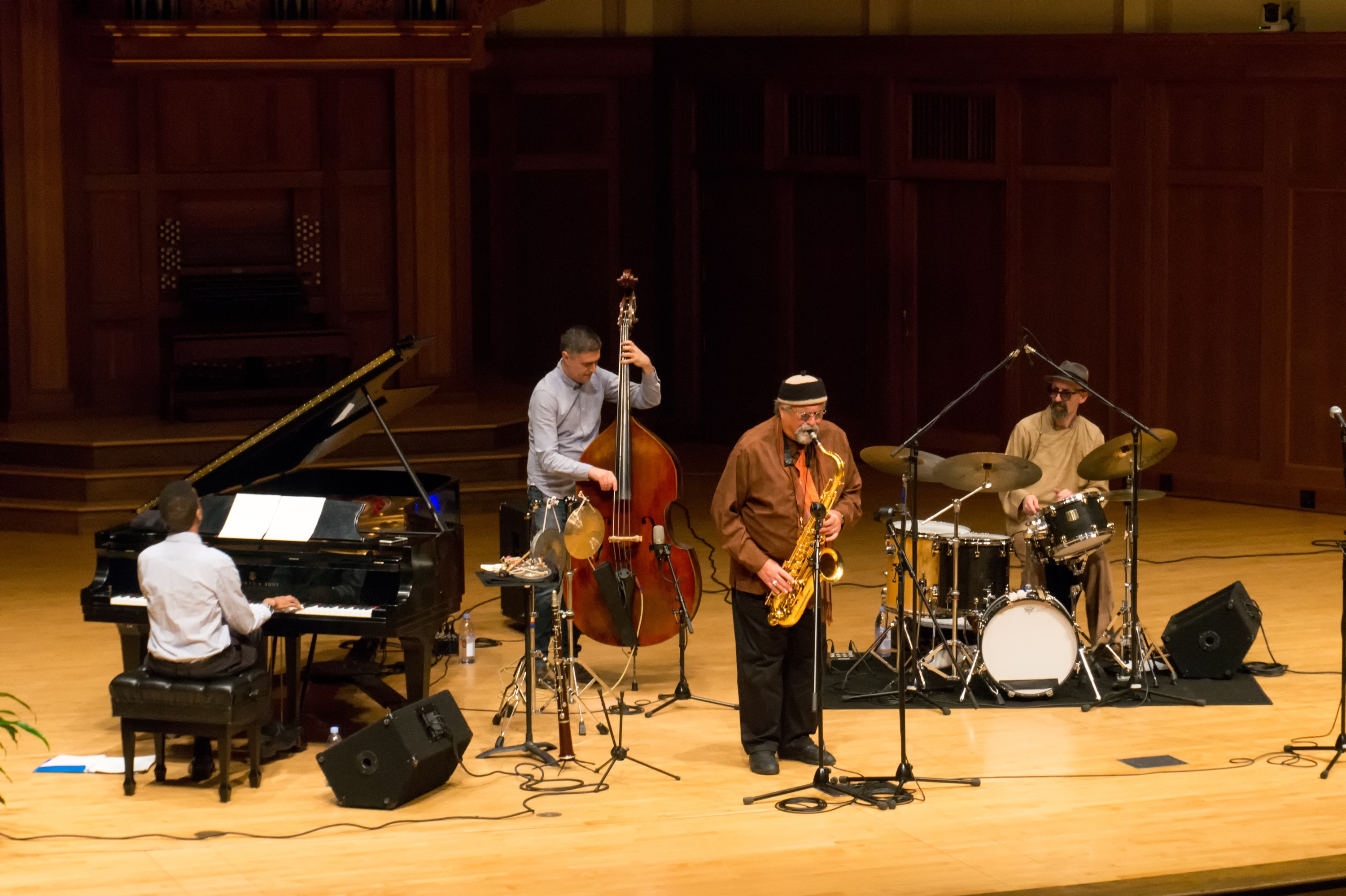 Joe Lovano performs with his band in Harper Hall.

One thing that has always stuck out to me about Lawrence, especially as a jazz musician, is the school’s ability to bring in excellent jazz artists, either renowned or up-and-coming.

My freshman year I saw John Raymond and Real Feels, whose guitarist, Gilad Hekselman, would make waves with his future album, “Homes.” Last Friday, I rushed into the chapel along with practically every jazz musician at Lawrence and many other people from Appleton to see legendary saxophonist Joe Lovano.

Lovano’s accolades are impressive; he has received an honorary doctorate from Berklee School of Music, and he has played with many of my favorite musicians, including John Scofield. The program told us that Lovano has released over twenty albums since the 1990s, a prolific amount for an older jazz musician.

Lovano has showed no signs of slowing down; on Friday, he walked onto the Chapel stage to massive applause, spoke for about a minute and then played for about an hour and a half, only stopping between songs to allow for a quick wave of applause. Since there was no program (there never really is at a jazz concert), and he didn’t speak between pieces, I have no idea what any of them were called. He said that he would be playing “a suite of my own compositions,” without giving any hint at titling. How was I to listen to them later?

So, instead of focusing on individual pieces, I will focus on the performers themselves and the feelings the music gave me overall. Lovano himself was incredible; his sax lines were ferocious, his fingers weaving up and down the instrument with immense technical skill.

What really struck me about his playing, though, was his sound. It was that perfect sax tone, that rich tenor sound that fills the room with either warmth or bite. Lovano leaned mostly toward bite. It was clear that he was a master of his instrument; we came to hear a legendary sax player, and our expectations were satisfied. I was more impressed by his band, actually, for this simple reason: I knew, going into the performance, that Joe Lovano would be extremely good at his instrument. He is a virtuoso, after all. However, there were no such preconceived notions about his backing instrumentalists.

His band, dubbed “The Classic Quartet,” consisted of Lawrence Fields (piano), Peter Slavov (bass) and Lammy Istrefi on the drums. All of them impressed me in different ways. Fields’s solos were very well developed. He weaved between bebop language and recurring motifs which made them not just listenable, but really enjoyable and engaging. Slavov’s bass lines were very compositional; they served each piece, and he rarely conformed to the classic walking bass line, preferring to do other bass work that was just as impressive to me. His bass solo was also impressively technical. Istrefi had some really interesting drum work, mostly sticking to a swing beat, but also exploding on the kit when Lovano was soloing, matching his intensity perfectly.

Friday night’s concert was incredible because it was a quartet of four incredible jazz musicians. I loved it, and it met my expectations perfectly — but it did not shatter them. Many times, with Lawrence jazz concerts, you sit down and expect a certain thing, and the concert you see completely shatters your expectations. This one did not, and that is perfectly okay with me. One of the best saxophonists came to Lawrence to play some classic jazz, and he played some classic jazz. And it sounded great.

Joe Lovano performs with his band in Harper Hall. Photo by Taylor Blackson. One thing that has always stuck out to me about Lawrence, especially as a jazz musician, is the school’s ability to bring in excellent jazz artists, either renowned or up-and-coming. My freshman year I saw John Raymond and Real Feels, whose guitarist,…