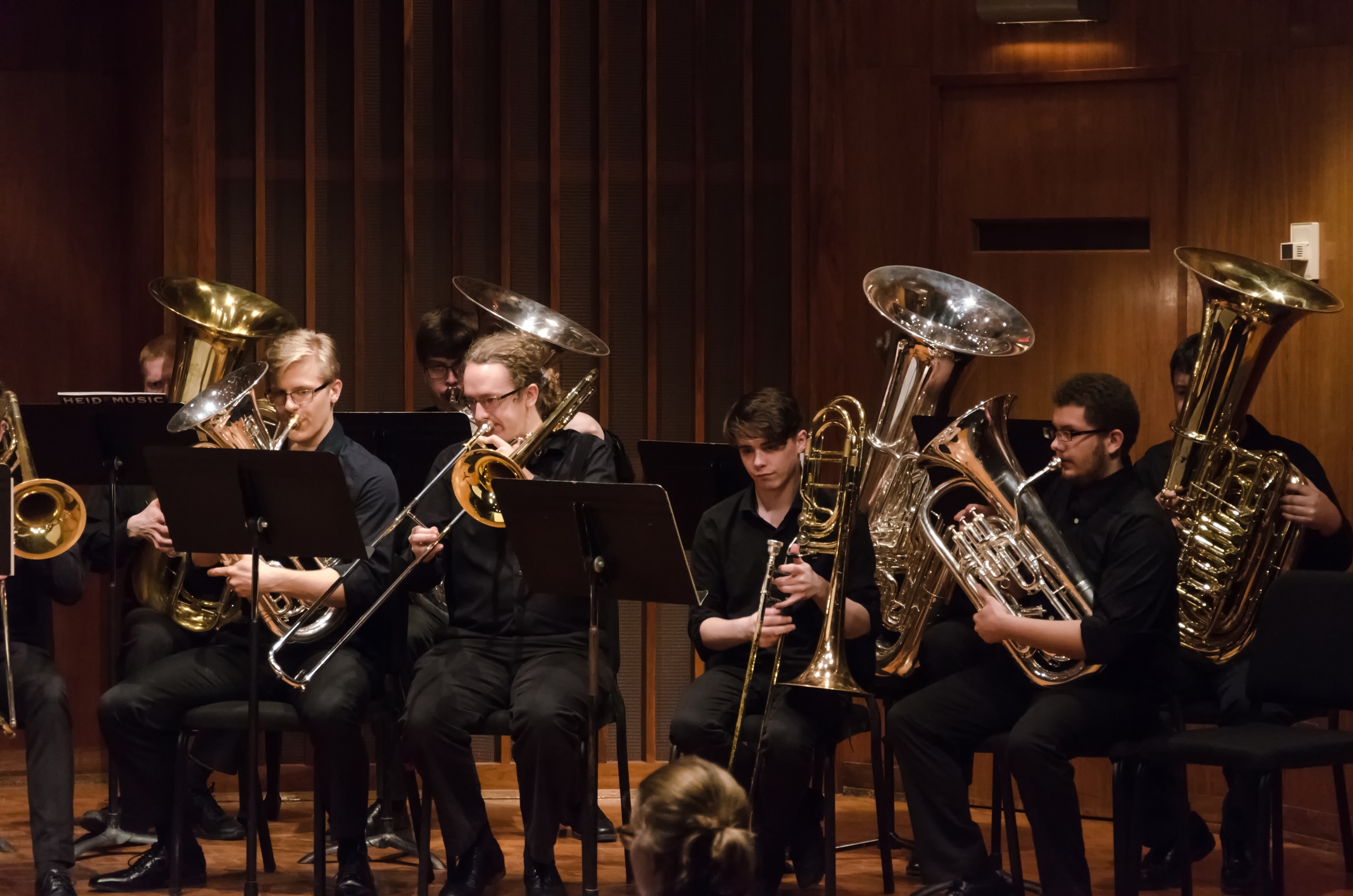 This Monday evening, I attended the Lawrence Brass Department Concert. This was a project developed by Lawrence’s brass faculty, consisting of music workshopped and rehearsed either throughout the term or at the “Brass Bjorklunden” that occurred over reading period. The program was lengthy—about eleven pieces performed by various brass ensembles. The opening piece was “Olympic Fanfare” by John Williams, performed by a brass trio consisting of three sophomores: Adrian Birge (trumpet), Cole Foster (euphonium), and Jonathan Ibach (horn). As they were playing the fanfare, the brass ensemble for the next piece (ten trumpets and four trombones) marched heroically onto the stage, striking ridiculous Olympic poses. After “Olympic Fanfare” concluded, the next ensemble set up on the stage, while Assistant Professor of Music Tim Albright talked about the brass department’s weekend of rehearsing at Bjorklunden and how exciting it was to perform this great brass music for an audience.

The first large ensemble piece was “Canzon Duo Decimi Toni a 10” by Giovanni Gabrielli, a sixteenth-century composer who was very influential on the modern wind band as we know it today. This piece was a little overwhelming to me, especially as a brass player, as four trombones and ten trumpets have a really hard time balancing together, yet it was delivered well. The next piece added more low brass as a large number of tubas and euphoniums joined their fellow brass students on the stage. This next piece was conducted by Associate Professor of Music James DeCorsey, and was titled “Scherzo from Divertimento for Brass,” by Karel Husa. The Husa piece took off at a brisk pace. It was an incredibly short piece, showcasing technique and a gorgeous sound from the tubas and euphoniums. This number had a remarkable difference in sound from the Gabrieli, with a nice, lush tone that was a lot more balanced. After the Husa concluded, Instructor of Music Marty Erickson stepped up to the front to conduct the next piece, “Variants: A Mighty Fortress,” a variation on the well-known hymn.

The next portion of the concert consisted of two quintets and the Trombone Ensemble, as well as the Tuba/Euphonium Ensemble. The first quintet played the first movement of Victor Ewald’s “Quintet No. 3.” This quintet was made up of all freshmen: Caleb Carter and Eviatar Shlosberg on trumpet, Hayden Guckenberg on French horn, Aaron Zommers on the trombone, and Henry Parks on tuba. It was clear to me that this ensemble had spent a long time rehearsing this quintet, and the work had paid off. This piece featured Shlosberg on the trumpet as well as Zommers on the trombone. They concluded the impressive movement to loud applause and cheering from the audience. When the Tuba/Euphonium Ensemble took the stage, Professor Erickson stood up and said a word about the next piece, a beautiful chorale entitled “Benediction” by John Stevens, featuring solos by Isaac Portoghese on the tuba and Cole Foster on the euphonium. At this point in the concert, this was perhaps the most moving piece of all the selections. The ensemble’s next piece, “The Corrupt Leader,” was composed by Portoghese. He gave a brief explanation of the piece being a theory project, then asked us to imagine any corrupt leaders we might be thinking of. This piece was a very thematic one, almost waltzy.

After this ensemble, the “Ricardo Emma Allie Liam Margaret (REALM)” quintet took the stage, playing another piece by Ewald—the first movement from his first quintet. This was my favorite performance overall, with very nice dynamics and a massive-sounding melody that felt like it was being performed by way more than just five people. This group included senior Emma Jensen on horn, junior Liam McDonald on bass trombone, sophomore Ricardo Jimenez on trumpet, sophomore Margaret Thompson on trumpet, and freshman Allie Goldman on trombone.

The next group to take the stage was the Trombone Ensemble, comprising the trombone studio and several faculty members. They played a beautiful Elgar piece arranged by Lawrence graduate Dominic Ellis, and then a jazz number featuring a full rhythm section, titled “Let’s Get Away from It All.” This last one was another favorite of mine, featuring the improvisational talents of freshman Bennett Gabriel and Albright.

When this piece had concluded, Albright thanked the audience once more for attending and invited every brass player that had performed up to the stage for “a really big tune” by Percy Grainger, conducted and arranged by Professor DeCorsey. Overall, this was a well-put-together concert, showing off the talents of the students as well as the faculty.

Students of the Lawrence University Brass Department perform in Harper Hall. Photo by Marieke de Koker. This Monday evening, I attended the Lawrence Brass Department Concert. This was a project developed by Lawrence’s brass faculty, consisting of music workshopped and rehearsed either throughout the term or at the “Brass Bjorklunden” that occurred over reading period.…