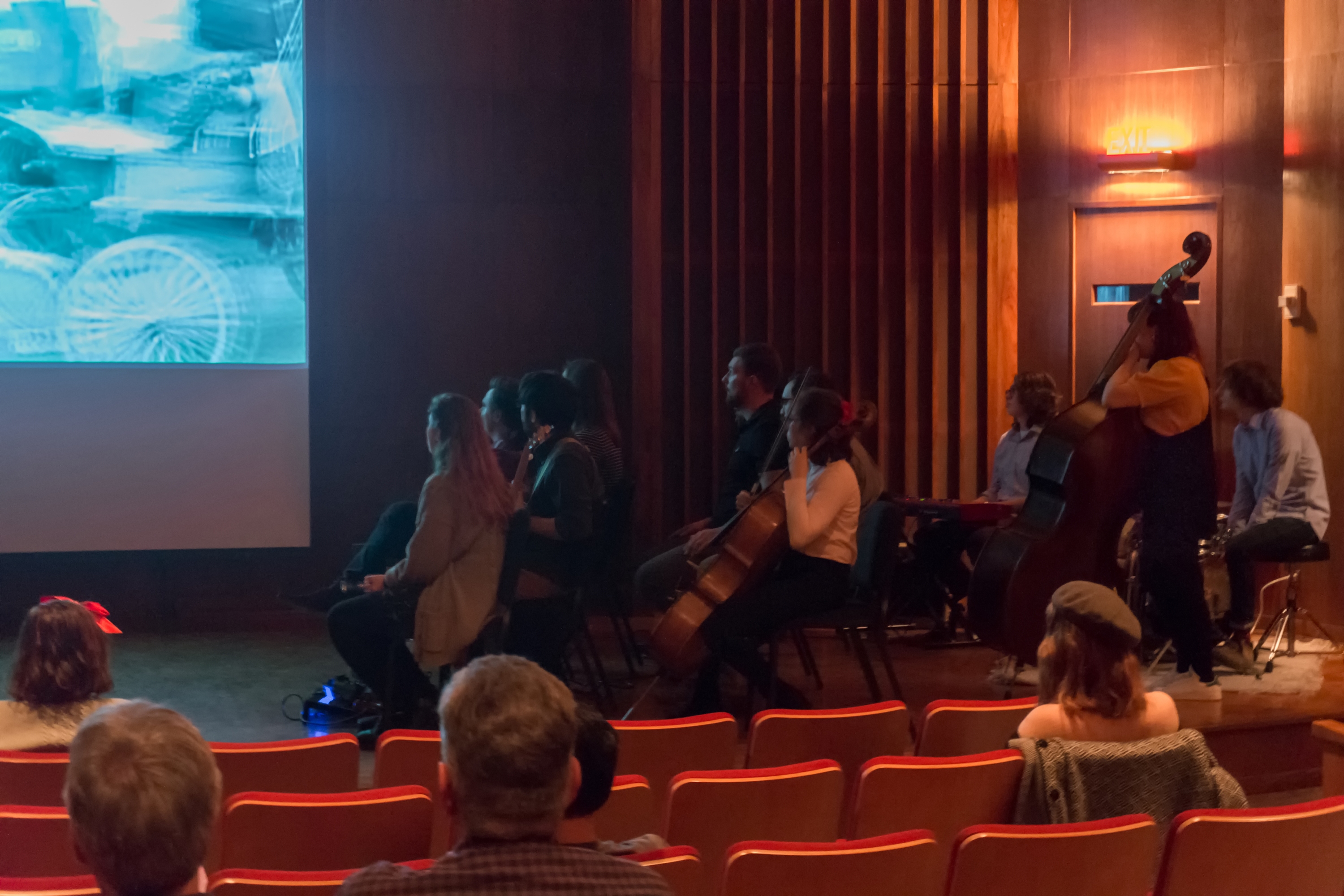 Improvisation Group of Lawrence University performs to silent film in the Cinema.
Photo by Taylor Blackson.

The Improvisation Group of Lawrence University (IGLU) is an ensemble run by Instructor of Music Matt Turner. The ensemble, which currently has over 20 members, includes strings, winds, brass, percussion, vocals, electronics, piano and melodica. Some members participate on more than one instrument. On Wednesday, Feb. 14 at 8 p.m. in Harper Hall, IGLU improvised to two silent films: “Cops,” directed and written by Buster Keaton and Edward Cline, and “Wurld,” directed by Elfin Saddle, Emi Honda and Jordan McKenzie.

At their weekly meetings, IGLU had watched both films ahead of time and planned some of their big musical moments, but everything else in their performance was improvised. Thus, no music stands sat on the Harper Hall stage on Wednesday night. Instead, the ensemble sat in chairs on the stage set up in a V formation facing a screen. This setup served a practical function since it allowed members of the ensemble to be able to watch the films as they played; it also symbolically placed an emphasis on the finished product of the improvised music and the films. The darkening of the stage lights at the start of IGLU’s performance served to heighten this emphasis.

The first film, “Cops,” was originally a silent film, which had its own score played live during its premiere. IGLU created their own score, however, tailoring their improvised responses to the visual stimuli. The protagonist in the movie, Keaton (as himself), tries to impress a girl that he likes by making some money by whatever means necessary. Piano, guitar, percussion and vocals set the stage sonically for the beginning of the film, where Keaton resolves to make something of himself. He eventually ends up hauling furniture across town with a poor old horse and winds up in the middle of a police parade.

IGLU’s music expertly conveyed the mood for Keaton’s escapades: through clumsy runs and other gestures, they highlighted Keaton’s idiocy. The ensemble showed restraint and skill by abstaining from playing everything at once; members let others play sections on their own without adding too many layers. Yet, when the time came to create a group crescendo, everyone in IGLU committed, creating a wave of escalating sound as Keaton hurled a bomb that was thrown into his furniture carriage straight into the crowd of the parade, setting all of the policeman after him for the rest of the movie. An epic chase ensued, culminating with a final comic punctuation by the IGLU musicians.

The second film, “Wurld,” began much more mysteriously. This movie had an original soundtrack that was muted for IGLU’s performance purposes. The opening is a blur of some background that viewers cannot immediately identify—it appears to be carpet or static, and then the scene slowly transitions into dirt. IGLU created an ethereal background via percussion and electronics as the setting of “Wurld” was revealed: the film takes place in a fairy garden created in a plant pot, which is a microcosm of our world. The world of this pot transforms from simple garden to civilization with random objects standing for places and people. The music IGLU created for the beginning of the film was benign and calming, but as civilization progressed, the music became darker. Vocals and strings moaned, and other gritty noises resulted from the ensemble. The soundtrack exuded horror in one scene where an obvious throne is set up, with members of the society gathered around it, and some unidentifiable black matter falls upon the throne and knocks over the crown. The world eventually turns gaudy, then industrial, and trash begins to cover the ground. IGLU’s music coalesced into a painful cacophony of sounds as nature was eventually destroyed by the society’s metal objects, and a giant television takes the stage where members of the society watch. The last shots of the film zoom in on the television, which shows only static, underlined by the sound of a continuous cymbal. The film ends with the same shots of static with which it began; only now, however, do we recognize it as menacing.

The audience applauded gratefully to conclude IGLU’s superb performance. Each of the ensemble members’ dedication and sensitivity in music-making paid off, for the group was at once cohesive and pliable, able to explore new ideas on a whim as well as stick to a general plan. IGLU showcased a wonderful merging of two arts—music and film—and further illustrated the fruits of improvisation. For more information about joining IGLU, please contact Instructor of Music Matt Turner. To find out about IGLU’s upcoming performances, please refer to the Lawrence University Event Calendar online.

Improvisation Group of Lawrence University performs to silent film in the Cinema. Photo by Taylor Blackson. The Improvisation Group of Lawrence University (IGLU) is an ensemble run by Instructor of Music Matt Turner. The ensemble, which currently has over 20 members, includes strings, winds, brass, percussion, vocals, electronics, piano and melodica. Some members participate on…